Cooper Cronk turned on-field coach with a left arm that dangled by his side as one of the great grand final gambles turned to gold for the Roosters, crushing the Storm's bid for NRL immortality.

The most talked-about shoulder – at least since Billy Slater's judiciary hearing – somehow survived 78 minutes of cat and mouse as the Roosters' ruse delivered their first title since 2013, halting Melbourne's bid to be the first team in the NRL era to win back-to-back titles. 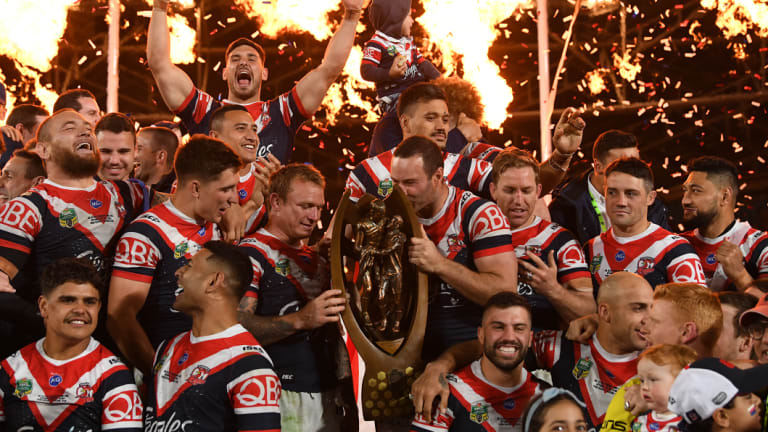 Grand moment: The Roosters set the stadium alight with a scintillating display to see off the Melbourne Storm.

A courageous Cronk, who was stunningly named in the Roosters team an hour before kick-off despite appearing to take no part in the minor premiers' final training run on Saturday, was almost armless – and often harmless – but will wake up with another premiership ring on Monday.

Coach Trent Robinson thought the reward outweighed the risk as Cronk cajoled and coached the Roosters to a stunning 21-6 victory over his old club with a broken shoulder blade; his shoulder seemingly only slightly more effective than in the second half of the grand final qualifier against the Rabbitohs.

Luke Keary not only made up for Cronk's limited involvement, but was stellar with perhaps his best display in a Roosters jumper – and on the biggest stage at ANZ Stadium on Sunday night.

Having stressed all week the specifics of Cronk's injury were on a "need to know basis" – the Roosters' only public statement diagnosed it as a "severe" rotator cuff complaint – it didn't take long to know the 34-year-old was at limited capacity.

But his eyes, ears and talk were all Robinson wanted, which he got. The NRL's greatest game manager has never managed a game like this.

Having coasted to an 18-0 lead at half-time in last year's grand final, the Storm found themselves trailing by the same scoreline 12 months later. And they never recovered.

The Roosters, the NRL's best defensive unit, delivered a bruising opening exchange and delivered a premiership in the first year after Cronk and James Tedesco had made a beeline for Bondi. They wouldn't have accepted anything less.

The result was a bitter end for Slater, who fought tooth and nail at the judiciary to be given a fitting farewell. It quickly turned sour inside the first 10 minutes. 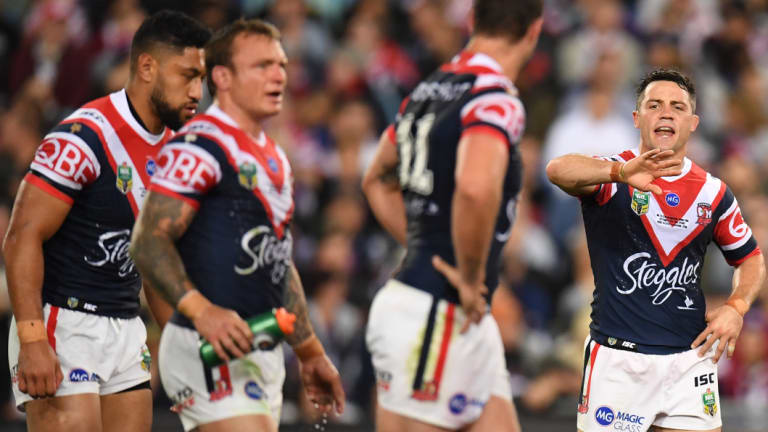 Field general: Cooper Cronk talks to his teammates on a night where his greatest value was as a game manager.

The only body part which came close to attracting as many column inches as Cronk's busted wing was Slater's stray shoulder, which barged its way past the NRL's dithering three-man judiciary panel and into his final fling.

But he was kept in check throughout as Cameron Munster was sent to the sin bin twice – including in the final two minutes for a crude and sly kick to Joseph Manu's head – as the Roosters rumbled to a second title under Robinson.

All week, the Roosters seemingly ran with one of the great grand final week ruses.

So tight was the circle of knowledge about Cronk's injury it's understood Robinson asked chairman Nick Politis – a man who not only runs the Roosters, but is the Roosters – to not attend their final training session on Saturday. Politis had no problem agreeing.

At that session, a helicopter hovering above Allianz Stadium showed a halfback with not even half a chance of playing, watching and wondering. To their word, the Roosters told no one Cronk would or wouldn't play a minute earlier than they had to. At 6.20pm, the no.23 was neatly nestled on the teamsheet.

Twelve fit men and a coach would do.

The Roosters blasted out of the blocks, twice scoring from repeat sets after the Storm botched kicks sent high into the Sydney night sky. They actually opened the scoring before Cronk had even touched the ball, Latrell Mitchell potting a penalty in the fourth minute.

At the heart of both tries was Keary, who threw a sumptuous floating ball for Daniel Tupou to score before Mitchell bamboozled Will Chambers with that mesmerising left-foot off a pass from his No.6. 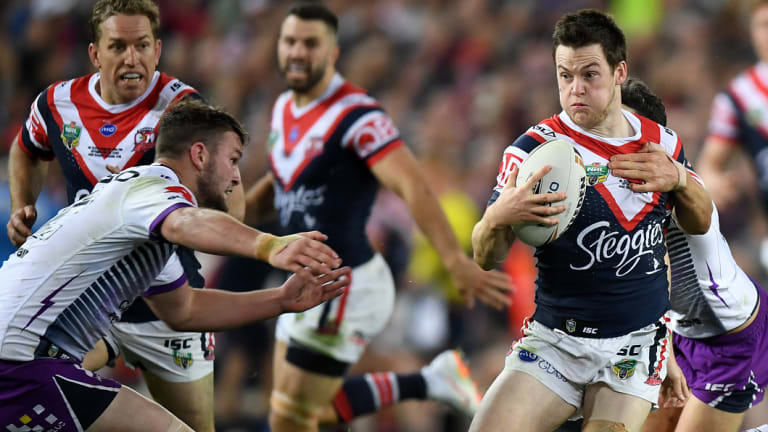 Man of the moment: Luke Keary puts in a sublime, near mistake-free performance.

The Storm's night went from bad to worse when Munster was sent to the sin bin for flopping on Jake Friend, who had torn downfield after Nelson Asofa-Solomona had fumbled the ball trying to find Cronk.

Minutes after Manu's try had sent the Roosters to the break 18 points up, Cronk sprinted off the field before any teammate.

It wasn't as quick as Addo-Carr, who scored Melbourne's only try of the night with a 90-metre intercept from a Keary stray ball after the tricolours kept Melbourne scoreless for 63 minutes.

Keary's response? A field goal to put the result beyond doubt.

From exactly where Cronk told him to be.