Parramatta legend Nathan Hindmarsh hopes Jarryd Hayne is able to finish his career as an Eel, but believes rival clubs would be “silly” not to chase the cross-code star.

The blue and golds began pre-season training on Thursday without Hayne because they can’t table a deal reflecting his market value until at least one contracted player is offloaded. The club hopes Michael Jennings will move to Newcastle, but the Knights are also preparing to invest heavily in disgruntled Bulldog David Klemmer and may opt not to sign both. 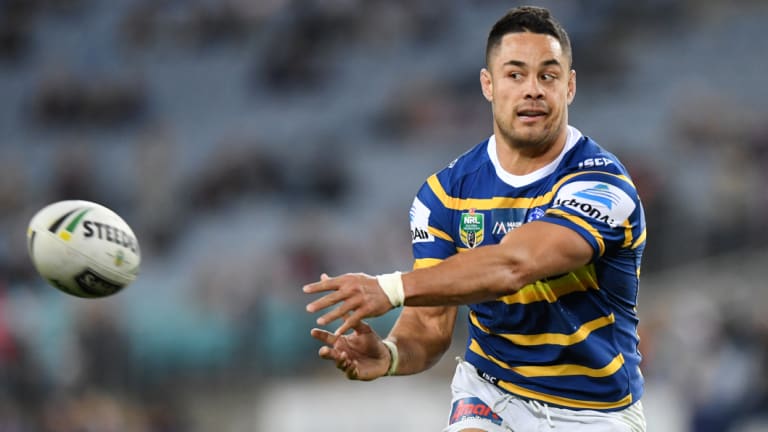 It remains to be seen whether Jarryd Hayne will play for Parramatta again.Credit:NRL Photos

Hayne, forced to train alone until the situation is resolved, has been linked to St George Illawarra or a switch to rugby union.

Hindmarsh, who played much of his career alongside the two-time Dally M winner, hopes it doesn’t come to that.

Hayne has already slipped through the Eels’ fingers once. The 30 year old ended up signing with the Titans following his NFL stint because Parramatta couldn’t come to his terms quickly enough. The Dragons have made discreet enquiries and have a marquee spot to fill in their backline after the departure of Nene Macdonald to North Queensland and the retirement of Jason Nightingale.

“If other clubs aren’t making a play for him, they are a bit silly,” Hindmarsh said. “We’ve all seen what he can do and he’s still got a bit to offer yet. Those couple of quiet years have helped him out if anything, to keep him pretty fresh.

“He was our best player for the last six to eight weeks of the season, so it would be sad to see him go. As a player who played the majority of his football at the one club, it would be good to see him off.”

Dragons forward Tyson Frizell, who has played alongside Hayne at State of Origin level, was open to the prospect of him switching to the Red V.

“He’s a quality player and we’ve lost Nene Macdonald, who has been outstanding,” Frizell said. "Jarryd played the back end of the year at wing and played some really good footy too.

“He’d be good to fit in if the club are looking that way. We welcome anyone who wants to come to our club. We lost Jason Nightingale too, so there are a couple of spots up for grabs.”

Now that the coaching carousel has come to a stop, player movement is expected to ramp up. Hayne is one of a dozen established NRL players yet to sign a contract for the upcoming season, although most will finalise their futures before they are required for preseason training.

There was a feeling Hayne owed the club after being released to pursue his American football ambitions and the former San Francisco 49er – after a stint with the Gold Coast – took a $700,000 pay cut to return to Parramatta.

“I don’t think anyone owes anyone anything,” Hindmarsh said. “That’s the business we’re in, you’re there to win games and they have to keep to a cap. I don’t think the club owes Haynesy anything and I don’t think Haynesy owes the club. I think it’s more of a shame for Haynesy not to finish off at the club he started.”