Ballarat has become a potential training and playing location for the fledgling Western Melbourne A-League team as they seek venues to help them prepare for their entry into the competition for the 2019-2020 season.

The new team, which was granted a licence to enter the A-League a fortnight ago, has 10 months to prepare for their first game but they are yet to lock in venues to either play games or train.

Members of the consortium are expected to visit Ballarat in January to examine Morshead Park (capacity 4000 people) and Mars Stadium (which hosts AFL games and holds 12,000 people) to determine whether they would be suitable for training and training camps.

The City of Ballarat is also keen to explore the possibility of A-League games for points being played in the city, having hosted practice matches involving Melbourne Victory in previous years.

The council recently locked in Melbourne Rebels for a practice match with Queensland Reds ahead of the Super Rugby season and the Western Bulldogs play AFL matches at Mars Stadium.

Mark Patterson, the City of Ballarat's executive manager of sport and active living, told The Age the city was keen on developing a long-term relationship with the Western Melbourne Group in a similar manner to the one they have with the Western Bulldogs in the AFL. 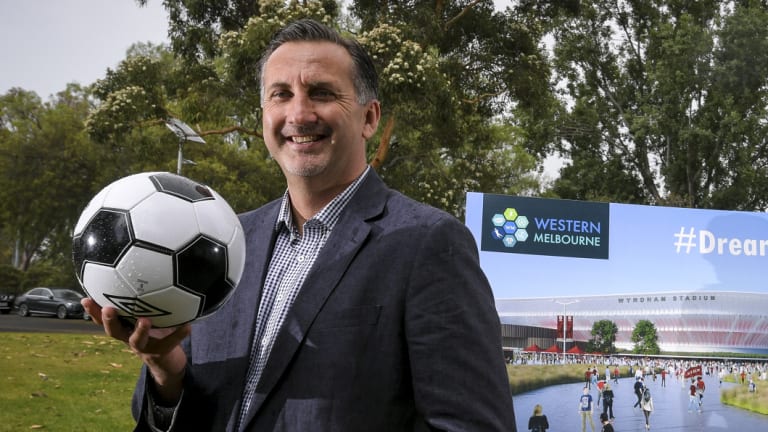 Ballarat is keen to have an involvement with the Western Melbourne Group.Credit:Eddie Jim

"There are potentially a few options," Patterson said.

The consortium is keen to play most of their home games in their first two seasons at GMHBA Stadium in Geelong while they build a purpose-built, privately funded stadium in Tarneit, which sits on the train line between Geelong and Melbourne.

However they do not have a formal agreement in place with Kardinia Park Trust and talks are not expected to progress on any potential arrangement until at least mid-January.

FFA's decision to award a licence to Western Melbourne surprised key stakeholders at the venue with GMBHA Stadium officials recently asking the group to indicate what the potential requirements might be for a team entering the A-League and the key dates required in any fixture.

Commercial discussions with Western Melbourne about using the venue are not expected to occur until such logistics become clearer.

Although Kardinia Park Trust want to accommodate Western Melbourne they are conscious they need to consult existing tenants such as Geelong, the AFL and the Big Bash competition to ensure their requirements are met.

About 80 events are held at GMHBA Stadium annually with work on the stage five redevelopment  expected to start after the T20 World Cup finishes in November 2020.

Western Melbourne will announce 2019 the name of the new team and the colours they will wear.