US PGA Tour officials have abandoned final-round play for the day at the BMW Championship without a single shot being struck.

With persistent rain falling for more than 24 hours, a waterlogged Aronimink Golf Club forced play to be cancelled on Sunday just after 2pm in Philadelphia. 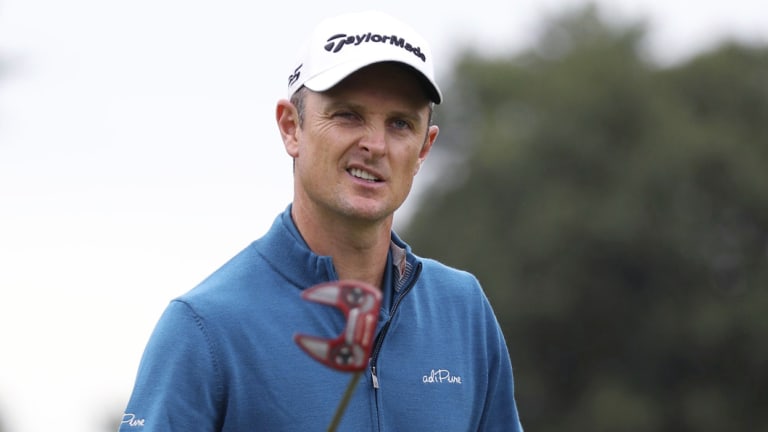 Pole position: Englishman Justin Rose can become No.1 if the poor weather persists.

"We've had (more than) three inches of rain since yesterday; we've got a golf course we just couldn't play," US Tour vice president of rules and competition, Slugger White, said.

With more rain and thunderstorms forecast for Monday, the possibility of the elite, 70-man event being shortened to 54 holes is growing and would mean leader Justin Rose would be crowned the winner.

That would also mean Rose moving to world No.1 for the first time in his career, replacing American Dustin Johnson.

After the completion of the third round, Rose led the way on 17-under-par, one stroke ahead of former No.1 Rory McIlroy and American Xander Schauffele.

White said officials were considering a 54-hole championship but refused to commit to shortening it until Monday.

"We will do everything we can to play tomorrow and we will see what Mother Nature gives us (Monday) morning," White said.

"If we don't get to Monday … then I think that we will be looking at maybe a 54-hole event. But I'm not going to commit to that right now."

PGA Tour policy states every feasible attempt must be made to complete 72 holes, but also that a final round cannot begin on a Tuesday.

If more than half the field completes the final round on Monday, only then would the tournament finish on Tuesday.

But that is looking unlikely with a 70 per cent chance of rain until 11am on Monday before scattered thunderstorms are forecast to start from 2pm. 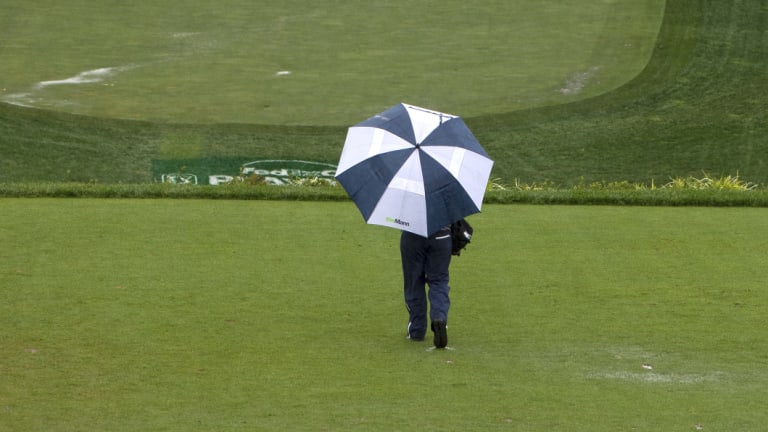 Waterlogged: The course has been deemed unplayable.

"We would (not) start a round on Monday thinking we could not get half the field finished," White said.

Shortening the BMW Championship, which determines the top 30 on the FedEx Cup standings who advance to the Tour Championship finale, would be a predicament for several players – particularly Jordan Spieth.

The 2015 FedEx Cup champion Spieth is projected to drop to No.31 and would miss out on the finale for the first time in his career.

For the Australians, it would mean Cameron Smith (projected ninth), Jason Day (10th) and Marc Leishman (29th) advance to the finale in Atlanta, Georgia in two weeks.

Projected 51st, Adam Scott would not make it to the Tour Championship.