Josh Hodgson believes the coaching furore engulfing the Wests Tigers will be in the back of their minds but it won't make a difference when the opening whistle blows.

The Canberra Raiders are set to face a Tigers outfit adopting a siege mentality in the midst of the drama surrounding head coach Ivan Cleary at Canberra Stadium on Sunday. 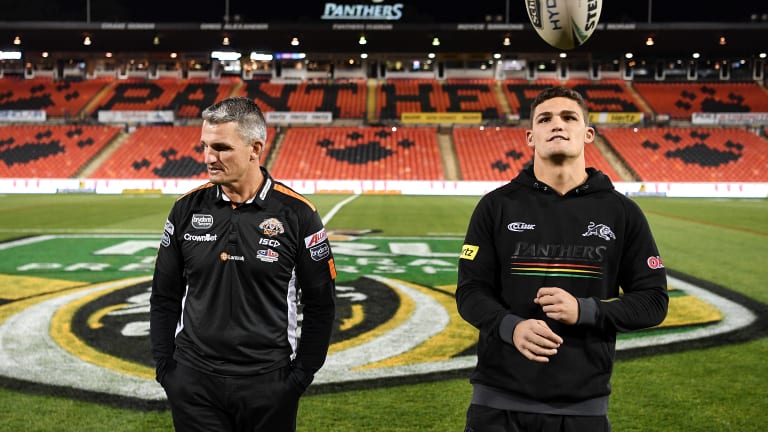 Enticing: Ivan and Nathan Cleary connecting at Penrith is being heavily speculated.

Cleary has been offered a deal to jump ship and rejoin the Penrith Panthers – which would pave the way for him to coach his son Nathan – following Anthony Griffin's sudden sacking.

Penrith supremo Phil Gould has poured cold water on the prospect of Cleary seeking a release from his Tigers contract to join the Panthers, and Fairfax Media understands the man himself is not going to walk away from his existing deal.

Former Tigers coach Jason Taylor was sacked after the Raiders dismantled Wests in round three last season, leaving some to ponder whether another Canberra game could fast track another coaching farewell.

The Tigers remain an outside chance to steal a top eight spot and Hodgson believes that is all they will have on their minds when they tackle the Green Machine.

"It’s a weird situation obviously. If that was here the players would be talking about it and you would be thinking about it in the back of your mind, but I think come game day you just worry about trying to get the win," Hodgson said.

"Especially with them still chasing the eight, I’m sure they’ll come out here firing. We’re by no means expecting them to be off but I’m sure in the day to day run of the mill things it would be a bit weird, wondering if your coach is going to be here or not, but I’m sure come game day they’ll be fully focused on us."

Hodgson says he hasn't felt any extra pressure since assuming the captaincy role in Jarrod Croker's absence – "probably disappointment is the thing I most feel at the minute".

The English rake made his return against the Tigers in round 15 – seven weeks later the Green Machine are out of the finals hunt with little to play for.

Hodgson admits the Raiders are "under-achieving" after missing consecutive finals series following their dizzying heights of appearing in the 2016 preliminary finals.

Now he is desperate to send the likes of outgoing trio Shannon Boyd, Blake Austin and Junior Paulo out with a bang.

"That’s probably a key thing for me that I’d like to do. It’s really disappointing not to make the eight, once in the last [five] years it will be that we haven’t made the eight," Hodgson said.

"We’re really disappointed with that, we know we’re under-achieving. We’ve got some areas that we need to address but we’ll look at that in the off-season.

"With the calibre of players we’ve got coming next year, it’s looking promising. We’ll hopefully send the boys that are leaving off with a couple of wins under their belt."