Australia looks all but certain to host another Olympic Games, with reports that the Brisbane bid for the 2032 Olympic and Paralympic Games will be installed as the preferred candidate by the International Olympic Committee as early as Wednesday night.

Respected Olympic news website Inside the Games said the Queensland bid for 2032 has been the standout and the IOC’s Future Host Summer Commission will recommend it to the executive board, which includes the Australian Olympic Committee’s president and IOC vice president John Coates. 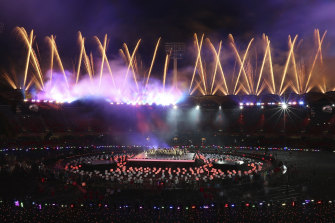 The success of the 2018 Commonwealth Games looks as if it will lead to making Brisbane an Olympic city in 2032.Credit:Mark Schiefelbein/AP

Should the board rubber-stamp the findings of the Commission, Queensland will continue as the sole negotiators with the IOC as they move towards an official unveiling as the 2032 hosts. That may happen as early as this year ahead of the rescheduled Tokyo Olympics but even if that IOC session is delayed, Australia now has the firm inside running on its rivals.

Last month, Brisbane Lord Mayor Adrian Schrinner told the Herald the region was on the verge of having ‘targeted discussions’ with the IOC as they push forward with plans to lock in a host after Paris in 2024 and Los Angeles in 2028.

“It’s very exciting. All three levels of government are on board and working feverishly. There was a lull for a period last year where there wasn’t so much talk about the Olympics, but that didn’t mean things weren’t continuing behind the scenes. Now, it’s just a matter of getting down to targeted discussions and hopefully make it a reality,” Schrinner says.

“That is something that could happen any time now. I think 2021 will be the critical year for this … I really do think that. It may not be that a decision is made this year but … a decision could be made at any stage from now on, essentially.”

Under the new bidding process, there is no big reveal of the kind that saw Sydney awarded the Games ahead of 2000. Instead, potential hosts engage in a ‘continuous dialogue’ with the IOC that reduces the immense expense required to make a Games bid.

Cities must also make heavy use of established venues to ensure there is no waste and white elephants of the kind that have littered recent hosts, including Rio in 2016. The south-east Queensland bid will make use of many of the venues used at the successful 2018 Commonwealth Games.

Other interested bidders include Doha, a German bid, Budapest and what appeared to be a fanciful joint bid by North and South Korea. The Queensland bid had already been installed as the favourite but the report will now take that process to the next level.

A feasibility study suggested Queensland could host the Games for a net cost of around $900m once domestic revenue and IOC funds were taken into account. Coates has previously suggested the Games could be cost neutral for Brisbane and surrounds given the new streamlined hosting regulations.

The study, with Brisbane as the centerpiece of the bid, was released by the Council of Mayors, a group representing south-east Queensland, in early 2019.

Queensland Premier Annastacia Palaszczuk announced a hiatus to the bid during the coronavirus pandemic but it was revived in December.