Riyadh: Australian rider Toby Price finished fourth on stage 10 of the Dakar Rally, dropping him to fourth overall in the motorcycle section of the gruelling endurance race in the Saudi Arabian desert. 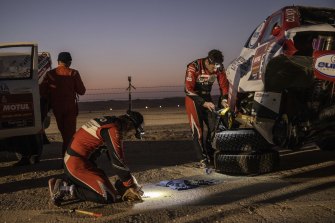 Price was among the riders who cancelled stage eight in homage to popular Portuguese Paulo Goncalves, who died on Sunday following a crash on the seventh stage.

In the car section, Spaniard Carlos Sainz took a big lead after winning Wednesday's stage which had been halted at the halfway point by strong winds and deteriorating conditions.

The Mini buggy driver, a two-times winner of the event, had started only 24 seconds clear of Toyota's defending champion Nasser Al Attiyah but extended his lead to 18 minutes and 10 seconds.

The car category's 534-kilometre special stage was halted after 223 kilometres, with the competitors travelling to the bivouac in liaison.

Frenchman Stephane Peterhansel, a 13-time Dakar winner, was in third place overall and a further 16 seconds behind Al Attiyah.

Two-time Formula One champion Fernando Alonso, Sainz's compatriot, rolled his Toyota on the dunes and continued without a windscreen after losing more than an hour.

He had started the day 10th overall but fell back to 14th.

"It was a dangerous stage with lots of difficult dunes. Several kilometres before the neutralised section, we got completely lost with Nasser and other drivers," said Peterhansel.

The rally, being held in the Middle East for the first time, ends in Qiddiya on Friday.