Jonny Clayton and Dimitri Van den Bergh will go head to head for the final place in the Premier League Darts Play-Offs after Wednesday’s darting drama in Milton Keynes.

The pair enjoyed differing fortunes on the penultimate night of the league phase, Van den Bergh fighting back for a draw while Clayton was beaten by Peter Wright in the opener which opened the door for Thursday’s shootout.

Michael van Gerwen had secured his place in the top four on Wednesday, and he was joined by Jose de Sousa and Nathan Aspinall, whose place was secured before they took to the oche.

Van Gerwen is in pole position for top spot for a remarkable seventh time, after beating De Sousa in the final match of the night, but Aspinall has a chance to deny MVG first place if he beats De Sousa and the Dutchman is beaten by a resurgent Wright.

However, Van Gerwen has the look of a determined man, intent on winning back the title he has already won five times, but relinquished in the empty arenas of 2020. How he would enjoy reclaiming it in front of a sell-out crowd on Friday night.

Michael van Gerwen tightened his grip on top spot in the Premier League, as he held off a determined Jose de Sousa to earn an 8-6 victory that takes him two points clear of Nathan Aspinall.

De Sousa missed six darts to win the opener, but with Van Gerwen unable to punish him, the Portuguese Man O’Scores hit the front. Van Gerwen bounced back to level, despite missing darts of his own, and that set the tone for the opening eight legs which were split between the pair.

Both men exchanged blows, neither giving too much away with top spot on the line and the likelihood that they could meet again on Friday in either the semi-final or final. 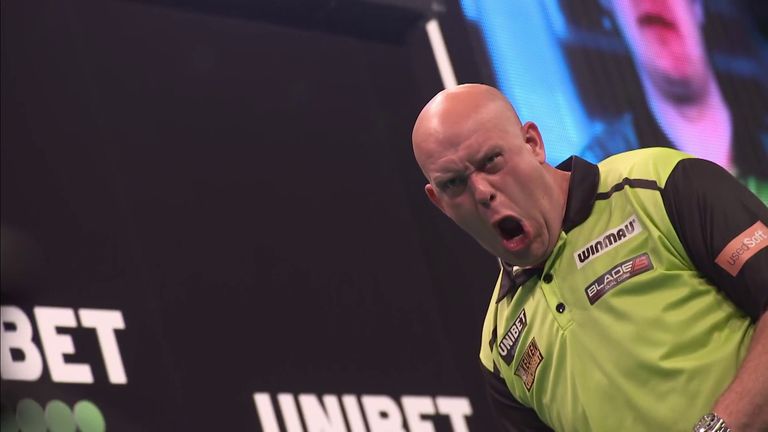 It took until the ninth leg for the first man to buckle, MVG conjuring a 12-dart break of throw to lead for the first time and he consolidated it with a 14-darter on his own throw to move within two points of victory.

The Dutchman secured a point and pushed his average into three figures when he took out 100 for another break of throw and to stand one leg away from victory.

But De Sousa stayed strong, as he has done throughout his first year in the competition, breaking Van Gerwen and then holding in 11 darts to force a deciding leg where MVG prevailed, but only after his opponent missed two darts for a share of the spoils. 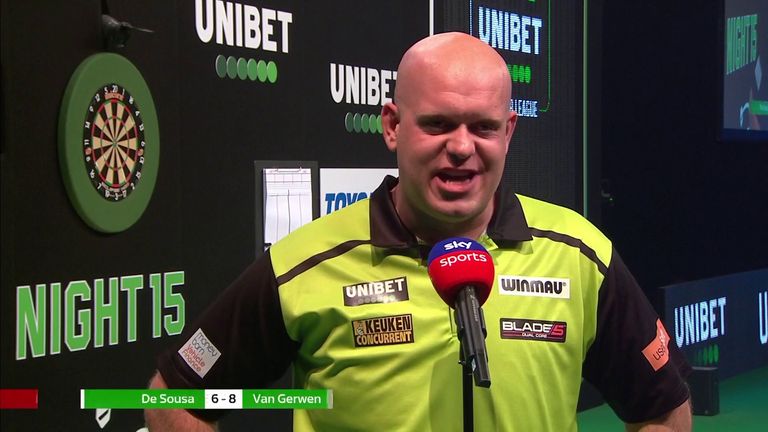 Dimitri Van den Bergh hauled himself back from the brink of defeat to play himself into a shootout with Jonny Clayton on Thursday night after a 7-7 draw with James Wade.

After Wright’s victory had kicked off the evening and ensured one place would still be up for grabs on Thursday, Van den Bergh danced his way to the oche knowing his destiny was still in his own hands – if he won.

The pair traded high-quality breaks as the Belgian took out 104 to win the opener, only for an 81 on the bullseye from Wade to level things up. A 56 finish gave The Machine a break after Van Den Bergh has missed a dart for the lead and in trademark Wade fashion he took out the next two for a three-leg lead.

"♥️ you all…"@VandenBerghDimi addresses the fans before discussing what's to come tomorrow night and how he's going to approach it.

Trailing 5-2, Van den Bergh kickstarted his hopes of a comeback with a brilliant 11-dart leg and when he won two of the next three, he was within touching distance of the former Premier League champion.

Wade was first to secure a share of the points with a 121 check-out, but fittingly in a high-quality contest, Van den Bergh landed his fourth three-figure outshot of the match, taking out 130 on the bullseye for a well-earned point that keeps his destiny in his own hands.

Snakebite storms back as pressure piles on Clayton

Peter Wright continued his unlikely play-off push by reeling off six successive legs to beat Jonny Clayton and derail the Ferret’s hopes of a top-four finish in his debut Premier League campaign.

However, after Van den Bergh battled back to earn a draw against James Wade, Snakebite, who has only twice reached the top four, will not make Friday’s conclusion to this year’s tournament.

It’s a different story for Clayton, who will head into Thursday night with a chance, despite a third defeat in his last five matches. 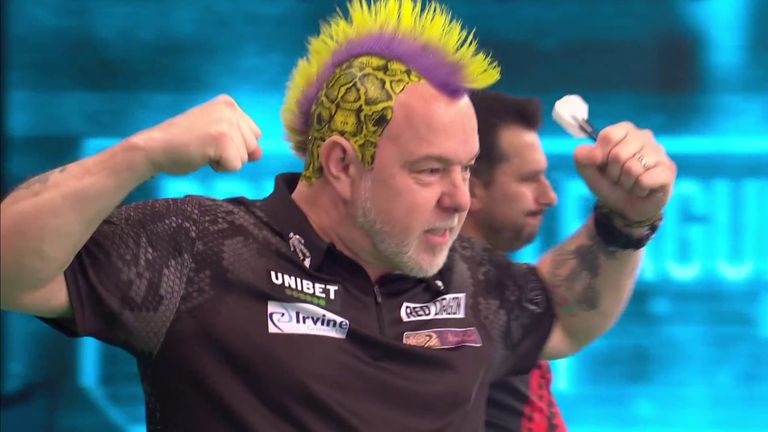 The first three legs went with throw before a classy Clayton 13-darter broke Wright to open up the first significant advantage of the contest and the Welshman ploughed on, pinning double 16 for a 4-1 lead that left Wright foundering.

However Snakebite had won five consecutive legs to beat Dimitri Van den Bergh on Tuesday to stay alive in this year’s event and he went one better with a staggering six-leg burst as Clayton, who barely missed a dart at double early on, lost his way.

Wright was at it again, punishing missed darts at double from the Ferret in the eighth and ninth legs to level the contest before a roof-raising 161 finish gave him a third break of throw and the lead for the first time since the opening leg.

There was no comeback for Clayton as Wright took out the next two for a win that means the final play-off spot will be decided in the final match of the league phase. 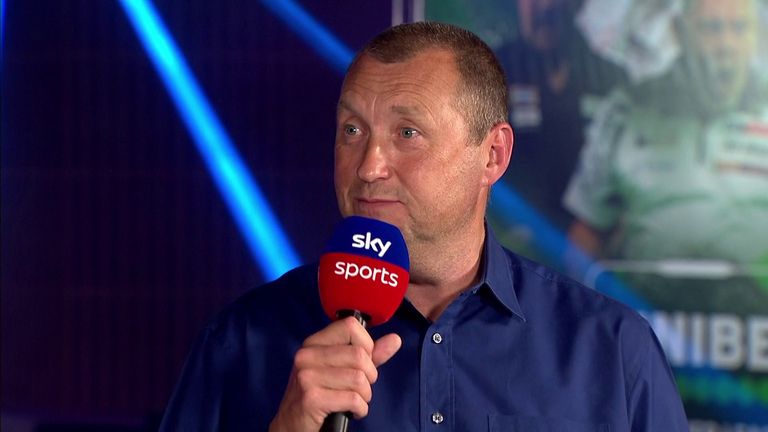 Asp out to go one better than runner-up finish

Nathan Aspinall took to the stage with his return to the play-offs secured thanks to other results, and he scrapped his way to a point against Gary Anderson that gives him a chance of top spot.

Aspinall won the first two legs against the two-time Premier League champion, who is playing for pride after his top-four hopes were ended following defeat to Michael van Gerwen on Tuesday night.

Anderson stopped the rot only for a brilliant 110 finish from The Asp restored his two-leg advantage.

In the end, it finishes honours even after a cracker. 🤩

To the Scot’s credit, he stormed back to first level the match, and then lead 4-3 before Aspinall squared the match.

Aspinall claimed the next two legs, following up a scrappy ninth with a brilliant 12-darter, thanks to a sparkling 121 finish on the bullseye that gave him a 6-4 lead.

Having fought so hard to lead, Aspinall then lost his way on the doubles, giving Anderson the chance to reel off three successive legs for a point before The Asp held his nerve to punish the Flying Scotsman’s missed dart at bull for the match.

The 2021 Premier League continues this week, with two more nights of action culminating with the Play-Offs on Friday, May 28. Watch all the action live on Sky Sports