Portugal vs Switzerland LIVE: Cristiano Ronaldo is DROPPED with manager Fernando Santos furious at his reaction to being substituted… as Portuguese look to avoid a World Cup last-16 upset

Would Santos the manager of Portugal drop #Ronaldo just because of his reaction to being subbed in the last game?
A manager at club level maybe yes.
With possibly 3 games to a WC final🤔
I think he has been left out because of his performances not his reaction. #WorldCup2022

Good point from Sutton here, he is still surely going to come on if Portugal need a goal this evening. How will he react on the pitch…will he go on the pitch?

Ronaldo left out of the Portuguese starting line up. Is there a possibility if he’s asked to go on for the last few minutes he will storm off down the tunnel and go home…? 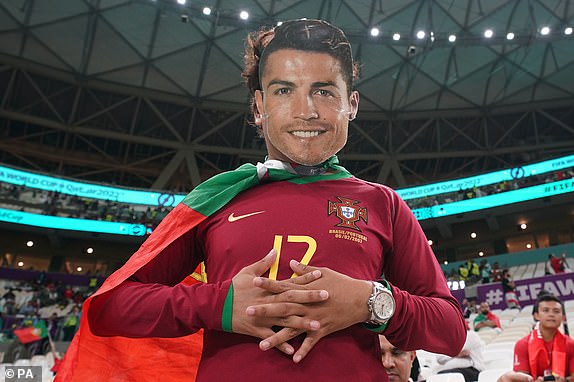 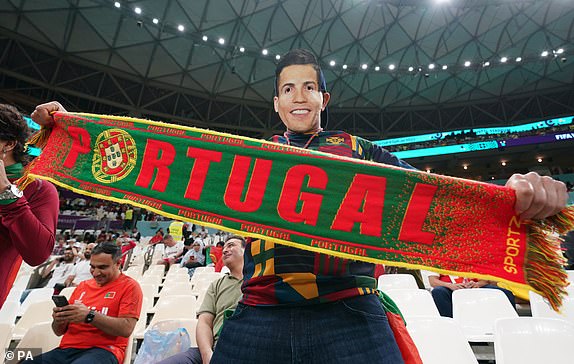 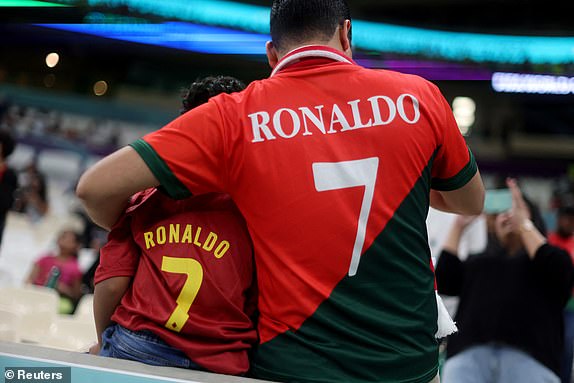 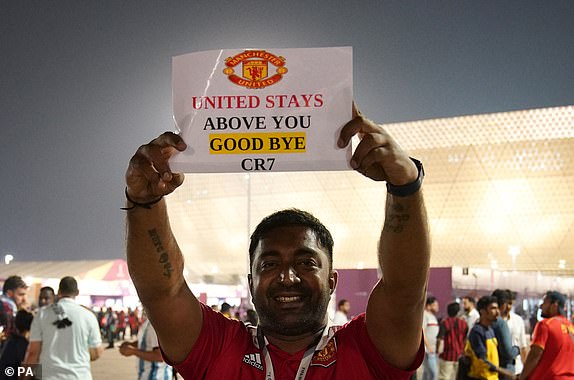 I guess Ronaldo will accuse Portugal of disrespect now. His ego has become so distorted he has forgotten football is a team game and you have to earn your place on merit

Returning to the side having missed the 3-2 win over Serbia last time out is keeper Yann Sommer in place of Gregor Kobel, while Silvan Widmer drops out the side to be replaced by Edimilson Fernandes.

There are four changes that sealed their last-16 spot with a 2-0 win over Uruguay, with full-backs Joao Cancelo and Nuno Mendes dropping out to make way for Diogo Dalot and Raphael Guerreiro, while Otavio comes in for Ruben Neves in the midfield. Ronaldo’s replacement is Goncalo Ramos.

Spain are OUT of the World Cup!

Huge drama in today’s first last-16 tie, with Spain being knocked out on penalties by Morocco!

More on the massive upset of the last-16 below… 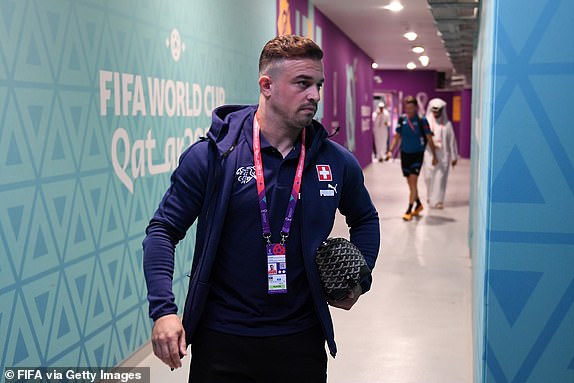 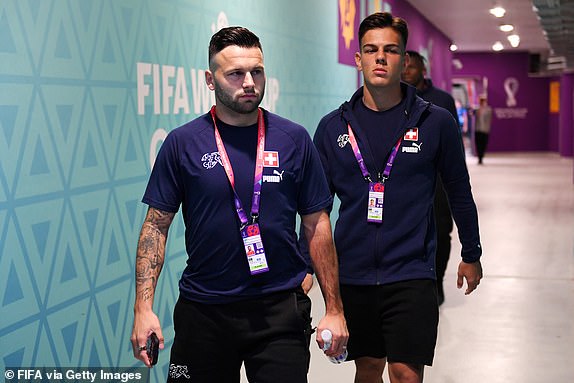 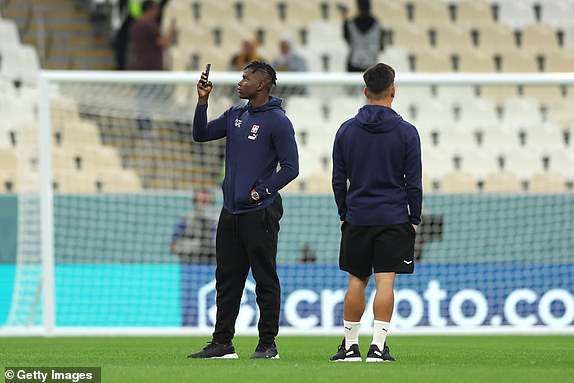 Morocco and Spain are going to penalties!

Still no goals after over two hours of football and that means only one thing – penalties.

Again we will keep our focus on Portugal vs Switzerland, but you can follow the shootout drama on the link below… 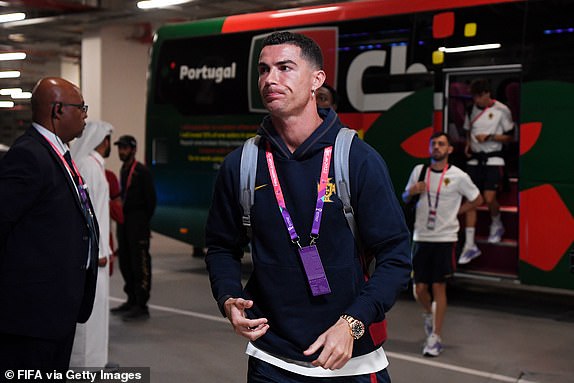 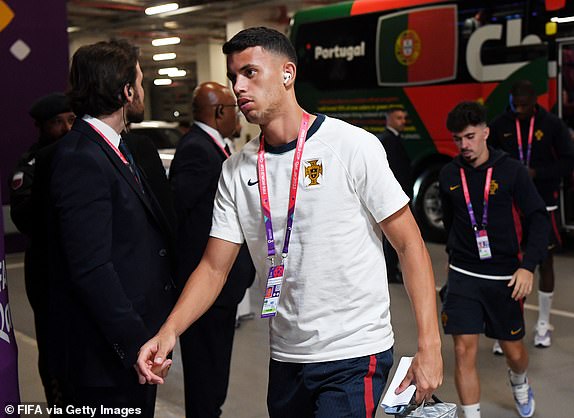 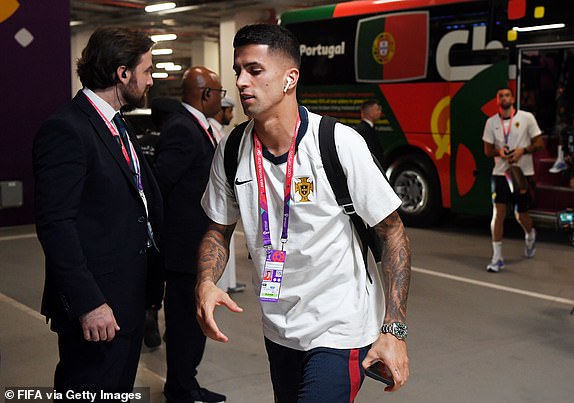 Portuguese reports, including the Record and O Jogo are suggesting that Cristiano Ronaldo will start the game from the bench!

Long wait, that. Not even I was alive to remember it. It was when they hosted the World Cup back in 1954 – it’s a famous encounter too.

Austria prevailed 7-5 in what is still the record highest goal scoring World Cup game of all time. Not sure how, it was played in the heat of just under 40 degrees Celsius in Lausanne. Imagine a game today having half the amount of goals in that heat, let alone setting records! 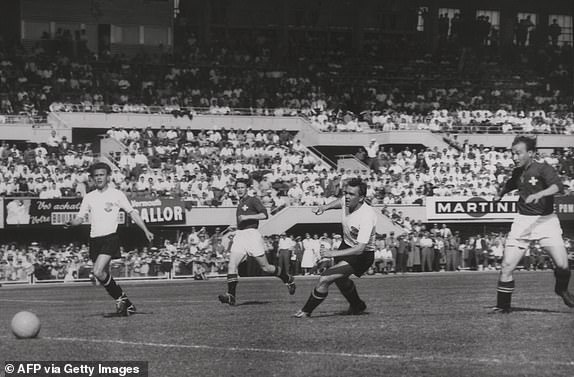 ‘MLS can’t compete with the money but his brand won’t grow as much in Saudi’: Alexi Lalas tells Cristiano Ronaldo he’ll be ‘out of sight, out of mind’ if he joins Al-Nassr for $211m-a-year as he urges him to head to the US

KATE McGREAVY: Cristiano Ronaldo will be ‘out of sight, out of mind’ if he joins cash-rich Saudi club Al-Nassr following his Manchester United exit, according to former USA defender Alexi Lalas.

We are going to extra time between Morocco and Spain…

It’s been a cagey affair but both sides have had chances to break the deadlock in this game. It’s still 0-0 though after 90 minutes so if you wish to follow the rest of the action check out our live coverage with Oli ‘no goals’ Gamp right here…

I have no idea what this is by the way. All I can imagine in my head is the World Cup mascot doing a stand-up comedy gig in front of a small crowd with a brick wall background. 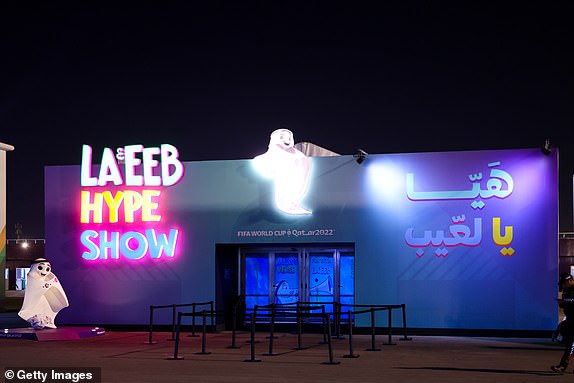 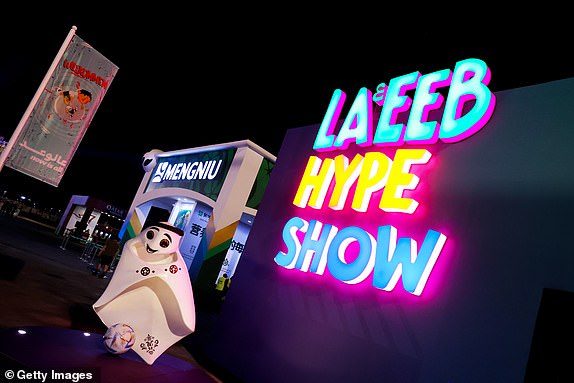 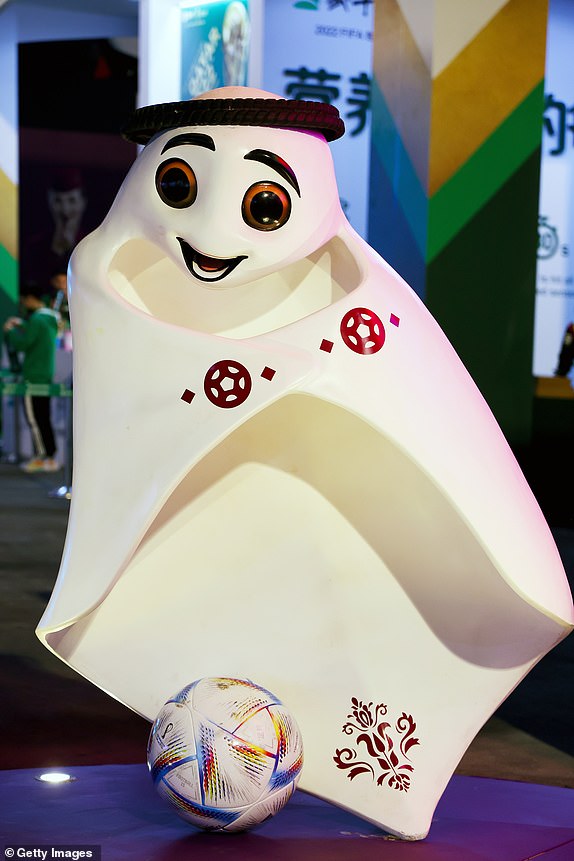 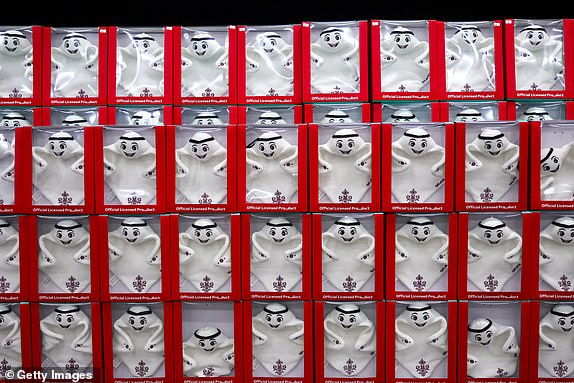 Fernando Santos is told to bench Cristiano Ronaldo by Dutch icon Ronald de Boer, who tells the veteran he ‘must be a little bit smarter’ after public sulk against South Korea

De Boer told Talksport that the 37-year-old has to be ‘a little bit smarter’ in the wake of his latest sulk.

That’s not to say he is starting of course but it’s a good opening qualifier isn’t it? We’ve already had one occasion in this tournament where Luis Suarez’s shirt was missing ahead of him dropping out of the starting XI. 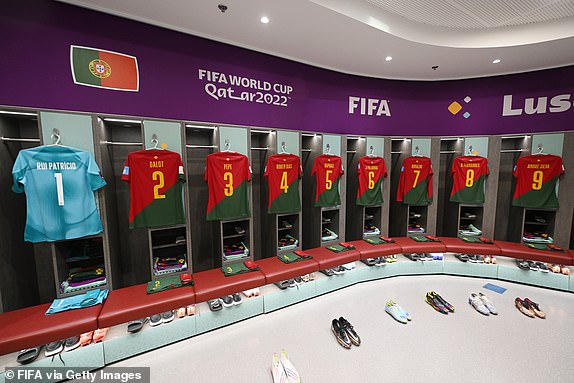 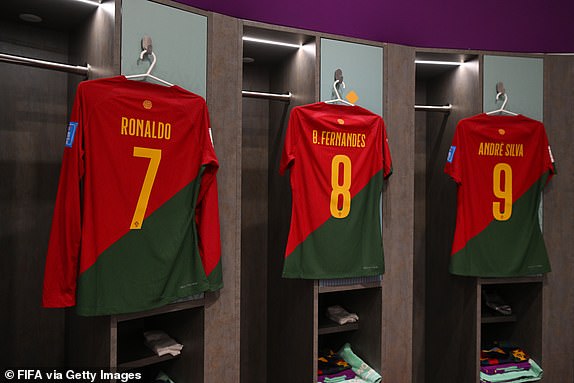 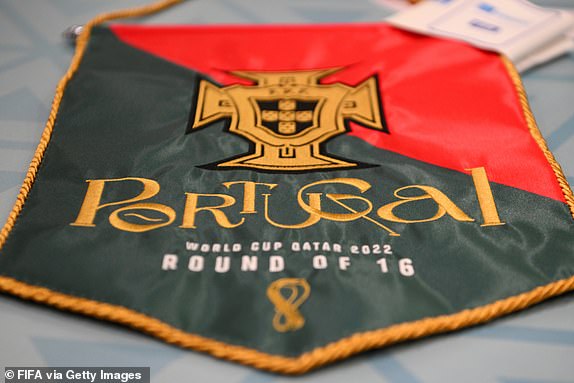 You can read more on the subject from Sportsmail’s chief sports writer below, as well as watch the video via our World Cup Confidential. 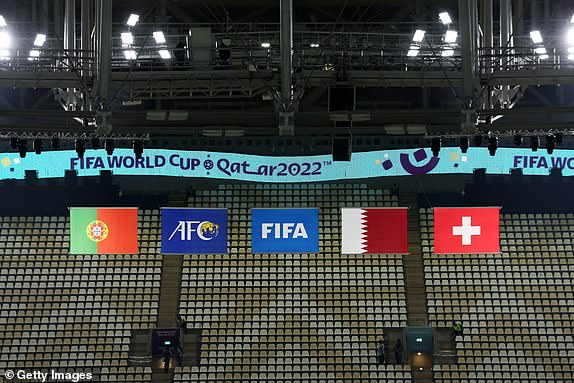 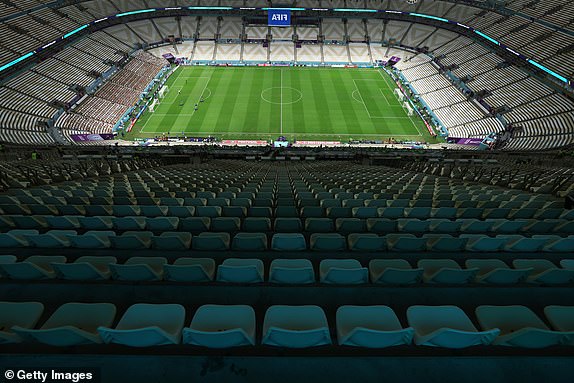 Familiar foes you might think – well their World Cup history goes way back to 1938 and just the competition’s third edition when Switzerland knocked Portugal out in a World Cup qualifier ahead of the finals in France.

They have since met a further eight times in this competition but never in the actual finals.

Already in 2022 they have played each other twice, with Switzerland’s 1-0 win in June (below) coming just a week after losing a reverse Nations League fixture 4-0. 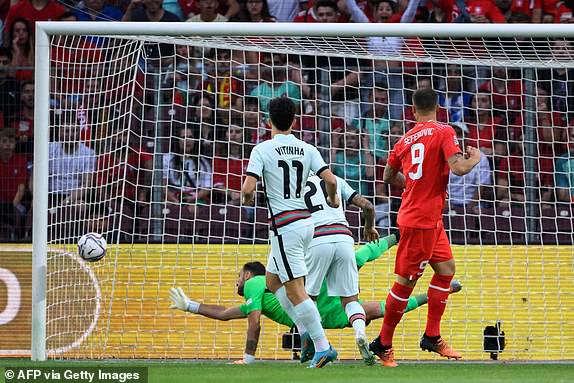 They have already been on their pre-match walk this morning in the sunny climes of Qatar. Certainly beats the late autumn chill of Britain right now.

’10 + Ronaldo?’ Friction between Portugal’s captain and coach Fernando Santos over his sub strop dominates lead-up to their World Cup last-16 clash with Switzerland… with papers saying: ‘For the first time, his automatic spot is being questioned’

Portuguese media have hinted that Ronaldo is likely to keep his place this evening, but they are not certain and that on its own is noteworthy.

I mean how many times in our lives have we ever considered Cristiano Ronaldo anything else other than the first name on the Portugal team sheet?

I’m old enough to remember debates over whether he was ready/old enough to start for the national team at Euro 2004 but that was a generation ago!

‘I really didn’t like it AT ALL’: Portugal manager Fernando Santos reveals his rage at Cristiano Ronaldo and even hints at DROPPING sulking captain at the World Cup over his reaction to being subbed

But the story took a new twist when Santos admitted he didn’t like Ronaldo’s reaction to being substituted during the match.

Given Ronaldo’s mixed form at this tournament, this now puts his starting XI place in doubt ahead of the last-16 tie with Switzerland.

So let’s dive into this Cristiano Ronaldo saga shall we and go through the things we know.

It all started when he was substituted in the 2-1 defeat by South Korea and there were reports by national media he had been verbally disrespectful to manager Fernando Santos as he departed the pitch.

Ronaldo claimed he was voicing his unhappiness at a South Korean player, and Santos backed this claim up at the time.

Our other last-16 tie today is already underway with Morocco taking on Spain. We are focusing on all things Portugal vs Switzerland here but if you wish to follow the other game in more depth then check out our live blog right here with Sportsmail’s Oli Gamp.

Portugal vs Switzerland will be our final game this evening concerning the last-16 ties, and they will face the winner of Spain and Morocco.

But you can’t take the drama out of the boy. Once more the focus is on Cristiano Ronaldo this evening and his place in the starting line-up after a spat with manager Fernando Santos.

t’s never dull when the former Manchester United forward is around so welcome to our live coverage of the final last-16 tie to be played at this World Cup as Portugal take on Switzerland. 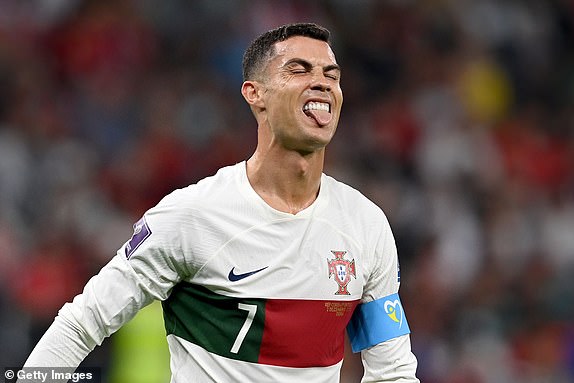