Benji Marshall looked very much like The Godfather of the Wests Tigers when he stood in a back corner, by the bar, flanked by teammates, as Moses Mbye was being unveiled as the club's new captain.

"As soon as we found out about Moses, I was like, 'that's OK, bro, it's just a letter, everyone knows I'm still the captain'," a smiling Marshall told The Sun-Herald. 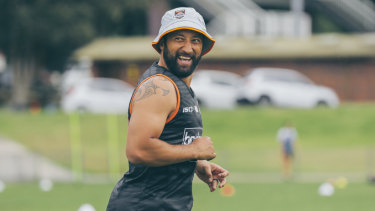 For all the excitement about Mbye's appointment, Tigers fans can be grateful they still have Marshall as he enters his 17th season in the top flight and remains an inspirational and influential member of the dressing room.

Don't for a second think the Kiwi pin-up has gone one year too long.

He didn't second-guess his decision when he felt a twinge in his hamstring a couple of weeks ago during a tough pre-season training session under new coach Michael Maguire.

He hasn't doubted himself as his teammates continually pester him about being a "grandpa" and "the guy we used to watch when we were at school". 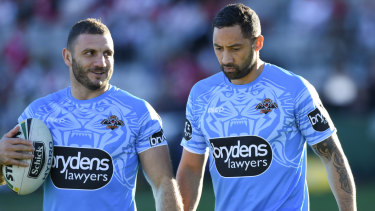 "It's been the joke of the pre-season about me and Robbie [Farah] being the grandfathers of the team," Marshall said. "When we debuted, some of these guys were one years of age. They're now 18. This is my 17th season. It's crazy.

"If you asked me after my fifth shoulder reconstruction if I would be in the game this long, I would have said 'no'.

"You won't believe this, but I actually turn up the happiest out of the whole team every day, and if anyone is down or low, I'll get into them and tell them to be happy about our job because we have best job in the world.

"For me, when the game is almost taken away from you, you want it back so much. I've lived that."

Jokes aside, Marshall has an immense respect for Mbye and says he's the perfect choice to be the team's leader.

Mbye best summed it up when he said of Marshall, one of the players he contacted for advice before he accepted the captaincy: "He's like a second dad at training. He's the first to put shit on you, but also the first to pick you up when you're down.

"That's kind of bloke you like to have around.

"He's the most skilful bloke at this club, and he has been for a number of years. He's getting older but his footy doesn't show that. I hope he keeps playing, and not just because of his footy, but what he contributes to the club and the community and the game. 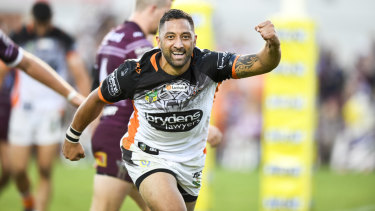 Happy as Benji: Marshall is enjoying his football more than ever after becoming a father in 2018.Credit:NRL Photos

"When I was a kid, everyone playing in the backyard was 'Benji' or 'Sonny Bill [Williams]'. I was Benji. He had the big step and cool haircuts and flick passes.  For me to go into an organisation and be supported by a guy like him, it's massive."

Marshall spoke to former coach Ivan Cleary last year about whether he wanted him for 2019. Few expected him to play so many games last year, especially with injuries to Josh Reynolds. Few expected Cleary to hop off the bus. At almost 34, Marshall wanted to hear it straight from Cleary.

"I said to him, 'don't sign me for the sake of signing me', and 'if you don't think I can, I won't play on'," Marshall said. "There were pros and cons, but I wanted to play again.

"Happiness has been a big part to being successful on the field. Being content in life takes the pressure off your footy."

Marshall's happiness in life stems from being a proud dad to almost one-year-old Fox and a husband to Zoe.  And while it seems unlikely he will play on, Marshall refuses to rule out 2019 being his last. He won't make an early call so there is no risk of the Tigers' becoming a sideshow to a farewell tour.

The first priority is locking down the No. 6 jersey ahead of Josh Reynolds. There was speculation Marshall could move to the centres, but he only has eyes for five-eighth. He'll even play reserve grade and quipped "we might get a crowd down to Leichhardt Oval".

"The tough pre-season is actually what I needed [under Maguire],'' Marshall said. "I've had a big pre-season, I've enjoyed it. I had the hamstring issue two weeks ago, but I was back at full training on Thursday.

"It takes hard work to have success. In the past we haven't got to the levels we have this pre-season. I feel we're in a good place. 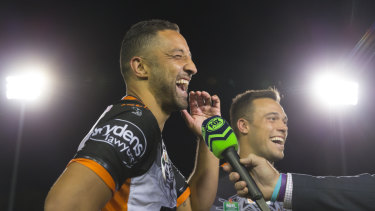 Bright smile: Marshall’s wealth of experience has been crucial for the Tigers in pre-season.Credit:NRL Imagery

"It's no secret me and Josh [Reynolds] are fighting for the same position. The thing with us is we want whatever is best for team, we don't care care if we come off the bench or play reserve grade. What I will do at training is fight and try to prove I belong in the team somewhere.

"I've already spoken to Madge and said if he plays Josh round one and there's no room for me on the bench, I'll play reserve grade. I did it at Brisbane and enjoyed it. I'll have no problems there."

Maguire loves Marshall. He wanted him back in the Kiwis side last year. The new Tigers coach says Marshall reminds him of the role Sam Burgess played at South Sydney when it came to keeping the group upbeat and together.

So even if he takes a back in 2019, just as he did at Mbye's unveiling as captain, you can be sure he'll be having an impact.