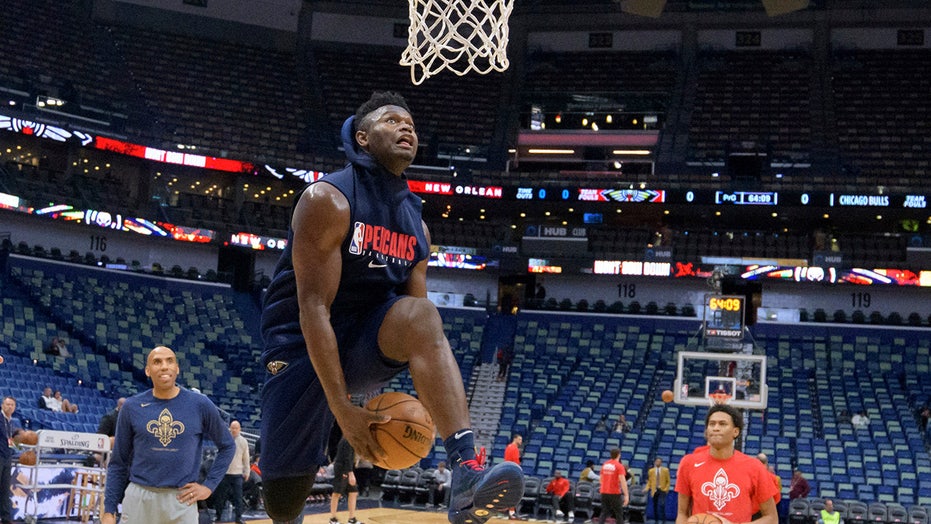 Zion Williamson is back in the NBA bubble, after tending to a family situation.

He won't be the last to go through the re-initiation process.

The New Orleans rookie, the No. 1 pick in last year's NBA draft, returned to Walt Disney World on Friday night and immediately went back into quarantine. There was no immediate announcement about how long he would remain separated from the Pelicans, but being back now suggests that it is possible he could play when New Orleans faces Utah on July 30 in the first seeding game of the NBA restart.

“My family and I appreciate the love and respect that everyone showed us while we dealt with a private family matter,” Williamson said Friday night in a statement. “I’m excited to rejoin my team in Orlando and look forward to getting back on the court with my teammates after the quarantine.”

Williamson spent eight days outside the bubble. He was tested daily during his absence for COVID-19, and all those tests were negative. That will likely shorten the amount of time he will spend in quarantine.

And there are going to be more than a few NBA people very interested to see how Williamson's return process works — because similar ones await other players as well.

Two people with knowledge of the situations said Friday that both Lou Williams of the Los Angeles Clippers and Austin Rivers of the Houston Rockets have added themselves to the list of players who have left the NBA campus at Walt Disney World to tend to family issues. The people spoke on condition of anonymity because neither player disclosed his absence publicly.

Among the others who have left the bubble so far for what were described as family reasons are Clippers teammates Montrezl Harrell and Patrick Beverley.

“I think we all knew that we could start the league. The key is can we finish,” said Clippers coach Doc Rivers, Austin Rivers’ father. “I think that will be the big thing. I think what the league has learned that teams have already known, it’s more than basketball that comes up. Guys have life going on. Whether it be a family problem, a kid problem, a wife problem, anything, there are issues that come in these guys’ life.

“We give guys days off all the time because of it. No one really notices it.”

Not all bubble departures are for personal reasons. Indiana All-Star forward Domantas Sabonis is leaving the bubble, the Pacers said Friday night, to get treatment for plantar fasciitis in his left foot.

Other players have missed time while dealing with coronavirus, including Sacramento’s Harrison Barnes, who was on a flight from California to Florida on Friday and ready to rejoin his team after he completes a likely two-day quarantine at Disney. The Kings believe Barnes could be ready when the seeding games, or resumption of the 2019-20 season, starts next week.

“As long as his baseline is at a certain level, I think he’ll have enough time to be ready for that first game,” Kings coach Luke Walton said. “But, you know, we’ll have to wait and see.”

Milwaukee got guard Eric Bledsoe, another player who tested positive for coronavirus, back on Friday. Bledsoe said he played a lot of the Call of Duty video game while he quarantined at home, but his conditioning level might not have suffered as much as the Bucks expected.

CLICK HERE TO GET MORE SPORTS COVERAGE ON FOXNEWS.COM

“In all honesty, considering it’s been been a while since he’s been able to touch the ball or do anything, he was very good,” Bucks coach Mike Budenholzer said after Bledsoe’s first practice. “Today was a great day for him and us.”

Denver got Gary Harris and Torrey Craig back onto the practice floor Friday, and Miami welcomed starters Bam Adebayo and Kendrick Nunn into a full-team practice for the first time this summer. Both Heat players revealed Friday that they had been dealing with coronavirus.

“It's a crazy thing," Adebayo said.

Doc Rivers said in a weird way, there can be a positive to seeing players dealing with various issues.

“I think in a good way in this, the public actually sees that the NBA players actually are human and they do have regular life issues going on,” the Clippers’ coach said. “The problem is usually with the life issues you can come back to the team and play the next day. Now with the life issue, you have to quarantine for 48 hours or four days. That’s very tough. But we have to do that to make sure everybody stays healthy.”

The NBA released the list of social-awareness sayings that players will wear on the backs of their jerseys starting when the seeding games begin Thursday and continuing through the remainder of the season.

“Equality” was the most popular selection, accounting for 25% of the player choices — and it will be worn in nine languages. Besides English, players opted to wear it in their native Italian, French, Bosnian, Lithuanian, Slovenian, German, Spanish and Latvian.

“Black Lives Matter” was the second-most popular choice, at 16%. And the list also showed that 16% of the players on rosters for the restart opted not to have any message.

Fans are going to be courtside for NBA games in the bubble.

In a way, anyway.

The NBA revealed plans Friday for “in-venue and broadcast enhancements for the resumption of the 2019-20 season” and what the league called “a more connected and immersive experience for fans.”

More than 300 fans will be invited to log in and connect digitally for each game, appearing live on the 17-foot video boards that surround the baselines and the one sideline where team bench areas are located.

It’s a partnership between the NBA and Microsoft to give fans “the feeling of sitting next to one another at a live game without leaving the comfort and safety of their homes, while players experience their energy and support in-venue,” the league said.