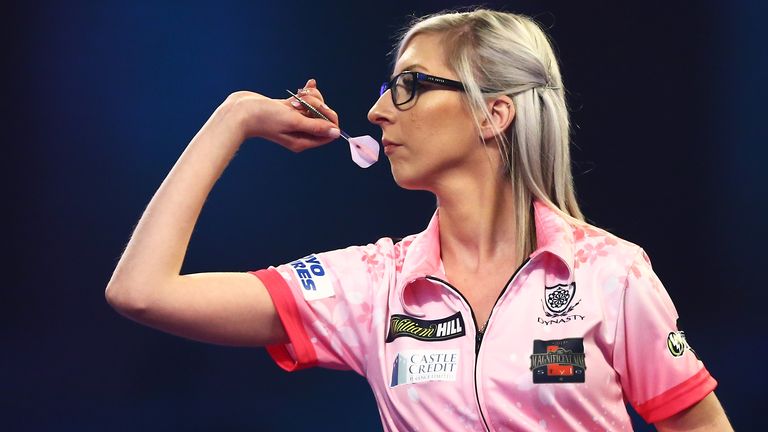 Gary Blades and Jason Lowe secured the first two available PDC Tour cards on day one of Q-School in Wigan, where Lisa Ashton and Fallon Sherrock both impressed.

Blades defeated Tony Newell 5-1 in their decider while Lowe prevailed by the same score-line against Steve Brown.

The 39-year-old Blades had previously competed on the PDC circuit from 2005-2010 before stepping away from the top level for eight years.

Lowe, a 47-year-old builder from Cradley Heath, will be competing full-time for the first time and only decided to enter this year’s Q-School event an hour before the entry deadline on Tuesday.

WINNER | Jason Lowe is our second PDC Tour Card winner on Day One in Wigan, defeating Steve Brown 5-1 in their decider.#QSchool2020 pic.twitter.com/bWvGrDTXi0

The annual four-day marathon in Wigan began with more attention than ever before, thanks in part to the presence of Sherrock after her history-making feats at the PDC World Championship.

‘The Queen of the Palace’ enjoyed an impressive start, winning her first two matches for the loss of just one leg, a 5-0 win over Billy Gallie was followed by a 5-1 win over Ray Campbell before she dispatched major winner Paul Nicholson 5-4 in a thriller.

Nicholson is making his return after a year away from the sport, but like Ted Evetts and Mensur Suljovic at Alexandra Palace, he fell short as Sherrock won with an impressive 93 average.

It was in the last 64 that Sherrock eventually came up short, this time she was on the wrong end of a last-leg shoot-out, losing 5-4 to Daryl Pilgrim.

Ashton fell agonisingly short last year, missing out on a Tour card by one point on the Order of Merit standings, but she got off to a strong start, reaching the last 32 where she eventually fell to a 5-2 defeat to Gary Blades.

Ashton’s conqueror in the women’s BDO World Championship final last Saturday, Mikuru Suzuki, started her first ever Q-School bid with a 5-0 win over Kirsty Chubb but fell at the next hurdle, losing 5-4 to Terry Roach.

As well as more women than ever before, the uncertainty surrounding rival organisation the BDO ensured the majority of the field from their recent World Championship were also in attendance in the North West seeking a Tour card.

Champion Wayne Warren was one of a few late withdrawals but the man he beat in Sunday’s final, Jim Williams, was in attendance and a 91 average was not enough for the Welshman who lost 5-3 to Richie Edhouse.

Former PDC World Championship finalist Andy Hamilton produced the best UK showing of those who had featured at the Indigo at The O2, reaching the quarter-final in his bid to return to the PDC ranks.

The Hammer, beaten by Adrian Lewis in the 2013 final at Ally Pally, took a step back from the professional ranks in 2018 after losing his card but he is back in Wigan and produced six wins before losing out 5-4 to Jason Lowe.

Terrific day of QSchool action, obviously loads of headline names but the success of Gary Blades is what it’s about too – unheralded, no official darts shirt but now two years back on the Tour after a 10-year absence

Of the myriad of star names on show at the Robin Park Tennis Centre, three-time world champion John Part picked up a couple of wins before a third-round defeat to Daniel Cooper, 1995 BDO world champion Richie Burnett was beaten in the second round.

Austria’s Harald Leitinger was the first winner of a Tour card, emerging triumphant from a field of 332 to beat Holland’s Martijn Kleermaker in the European Q-School final at Halle 39 in Hildesheim.

Kleermaker was the seventh seed at the BDO World Championship where he bowed out to an inspired Paul Hogan and is highly-fancied to secure his PDC playing rights over four days in Germany, but he lost out in the last-leg decider of a high quality affair which saw both men average in excess of 90.

The action continues for the next three days with the two winning semi-finalists in Wigan, and the winner in Germany continuing to pick up the automatic Tour cards.

However a consistent showing will help in the pursuit of the 19 cards available via an Order of Merit at both venues at the end of the four days.