The highlights to come today

CYCLING TRACK – Finals from 3pm AEST
Australia have a couple of big gold medal chances in the men’s C3 3000m individual pursuit. Darren Hicks and Nicholas David will be vying for the top couple of spots in what should be a thrilling contest.

POWERLIFTING – Finals from midday AEST
Although Australia doesn’t have anyone competing in powerlifting, it’ll be one to watch. It’s effectively who can bench press the most in a sport that is open to athletes with a physical impairment.

TABLE TENNIS
Australia’s table tennis players continue their campaign. Flag bearer Dani Di Toro continues her run in a seventh Paralympics, while Melissa Tapper, who has represented Australia in two Olympics – Rio and Tokyo – gets down to business.

SWIMMING – From 6pm AEST
After a brilliant day one, Australia don’t have as many gold medal hopes in the pool but their best chance is Keira Stephens in the SB9 100m breaststroke. Katja Dedekind (S13 100m backstroke) and Timothy Disken (SB8 100m breaststroke) are also ones to keep an eye out for. There are 14 finals.

WHEELCHAIR BASKETBALL – Australian women (10am AEST) and men (3.45pm AEST)
The Gliders (women) and Rollers (men) are in action on day two. Australia’s men finished sixth at Rio 2016, while the Gliders are looking to bounce back with a bang after missing qualification five years ago.

What happened on the opening day

Australia’s love affair with 400m freestyle races continued on Wednesday evening as Will Martin and Lakeisha Patterson made it back-to-back golds in the pool from “lucky lane six” before another two more victories helped Australia sit pretty atop the medal tally after day one of the Paralympics.

Australia may also have a new cult hero after Rowan Crothers bagged a gold medal in the 50m freestyle – and then celebrated wildly on top of the lane rope – before his “best friend in the entire world” Ben Popham won his 100m freestyle event and broke down in tears within seconds. 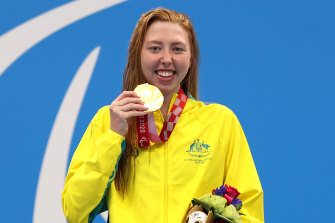 Australia finished the opening evening of swimming finals with four golds, one silver and a bronze. Adding in two gold medals from track cycling earlier in the day, Australia were outright first on the medal table after a blockbuster first day, ahead of China (five gold) and the Russian Paralympic Committee (three gold).

We’re back for day two

Good morning and welcome to our rolling coverage of the 2021 Tokyo Paralympics.