Curtis McGrath won his semi-final this morning in the single 200m KL2 with a personal best time of 41.134.

McGrath will be chasing gold later this afternoon.

Tokyo: Adopted Australian Vanessa Low broke her own world record three times and produced the performance of her life in the women’s T63 long jump to seal a second Paralympics gold medal in front of husband Scott Reardon, who was bawling his eyes out in the stands. 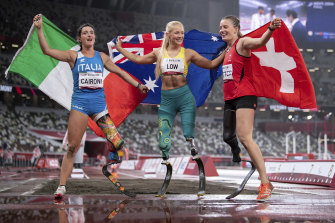 Reardon deserves a few drinks on the house from athletics fans after convincing Low to switch allegiances from Germany to Australia for the Tokyo Paralympics following appearances for her country of birth in London and Rio.

Never too old for a medal

Lovely scenes from the athletics track this morning as Australia’s Maria Strong, age 50, is awarded her bronze medal in the women’s shot put F33 event.

Strong’s Victorian Institute of Sport profile has the adage ‘age is just a number’ written on it and Strong has shown that with this performance.

G’day everyone and welcome to today’s day 10 Paralympics live blog.

There are already plenty of events underway in Tokyo including the men’s and women’s C4-5 cycling road race where Alistair Donohoe and Paige Greco are facing strong competition on a slippery circuit.

As always, please feel free to leave a comment.

Enjoy the day to come.