Jian Fang Lay is the answer for numerous great Olympic Games trivia question that would leave most Australians stumped.

The 48-year-old mother of two is writing one of those great scripts which fit so snugly with the best sporting show on the planet; surviving home schooling through Victoria’s arduous lockdowns last year, drafted onto the Australian team because someone else pulled out, having to win a preliminary match just to make the first round.

And all of this in her sixth Olympics, the most of any Australian woman alongside equestrian Mary Hanna.

But outside her own table tennis circle, Lay remains a mystery to most. With all the skills of a hardened veteran, the Chinese-born Lay caused her second major boilover in as many rounds after toppling Poland’s world No.35 Qian Li 4-2 in the women’s singles draw on Monday.

Lay, who slumped to 156 in the world rankings during the COVID-19 pandemic, will now equal her best ever performance at an Olympic Games when she plays in the third round.

Her exploits deserve more than an empty arena, and a map to find her on one of the umpteen channels broadcasting the Olympic program. 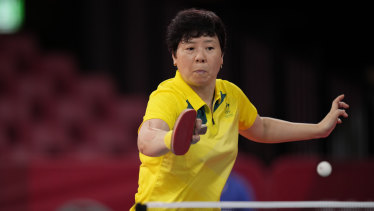 Jian Fang Lay has equalled her best ever Olympic Games appearance winning through to the third round.Credit:AP

But as the world battles the invisible virus which has cast such a cloud over these Games, Lay is the country’s invisible hero, working the only way she’s known.

She let out sporadic shouts, pumping her fists at regular intervals, as she started fast and finished even faster in her second-round clash against Li.

Lay won the first two games before Li levelled the match with a gripping 12-10 success in the fourth game. With all the momentum, you sensed the Australian fairytale was about to come to a quick, and brutal, end. At least that’s how these plots usually go.

But Lay hasn’t won so many Oceania titles and been at every Olympics since Sydney 2000 without gaining the table craft which can spin a match in an instant.

She rattled off the last two games 11-4, 11-4 to close out victory. The record-holder barely anyone knows will surely start attracting a little more attention now.

Never miss a medal or great sporting moment with our Olympic update emailed daily. Sign up for our Sport newsletter here.