The UFC lost one of its greatest draws two years ago when Ronda Rousey returned from a year off following her stunning 2015 knockout loss to Holly Holm and was finished in less than a minute by new champion Amanda Nunes.

Now, the UFC is confronted with another champion who is returning from a long layoff as Conor McGregor takes on arguably the sport's top pound-for-pound fighter, Khabib Nurmagomedov (26-0) of Russia, in the main event of UFC 229 on Saturday night in Las Vegas (Sunday AEST). 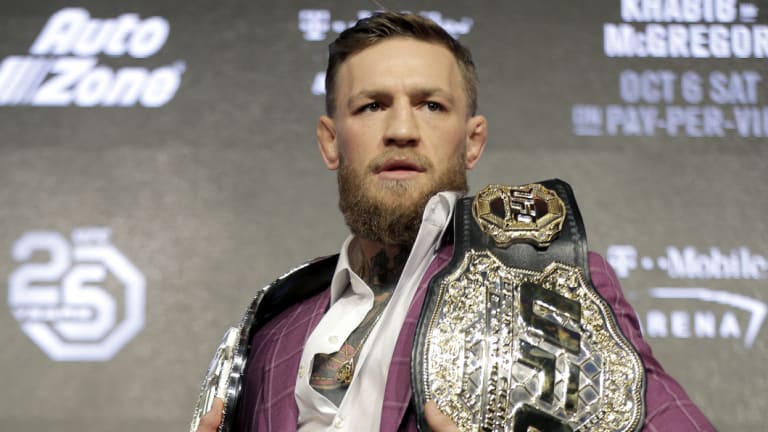 Showman: Conor McGregor relishes the spotlight ahead of his return to the octagon.

"He's a very popular fighter. People love him – rightly or wrongly – and they'll tune in to watch him win or get knocked out," former UFC middleweight champion and Fox UFC analyst Michael Bisping said. "Either way, it results in pay-per-view sales, a lot of money, and ultimately he's winning.

"If he loses, where does he go from there? That's the question."

While McGregor (21-3) has struck a six-fight extension with the UFC, he stands as a slight (plus-140) underdog against Nurmagomedov.

McGregor's strategy will be to land a power punch on Nurmagomedov, expected to seek takedowns of the Irishman and "maul" him, as the new lightweight champion has said.

It's a compelling draw, one UFC President Dana White said he expects to break the 1.6 million pay-per-view record.

Still, a defeat could cause major headaches for White and the UFC.

While he has plenty of possible opponents to summon afterward, all of them would specialise in taking the fight to the canvas like Nurmagomedov.

Among the options are a trilogy date with Nate Diaz, a move up in weight against welterweight champion Tyron Woodley, or a meeting with Orange County's former interim lightweight champion Tony Ferguson.

Defeat exposes fighters, diminishes their drawing power, and can transform the rapid-tongued brilliance of McGregor into the ramblings of a man desperate to recapture what has vanished.

Bisping says he envisions two endings to this: an early McGregor knockout victory, or an extended punishment by Nurmagomedov, who not only dodged that hand truck that McGregor tried to throw at him through a bus window in Brooklyn in April, but has listened as the Irishman has battered his father, religious beliefs, political friends and relationship with Vladimir Putin without flinching. 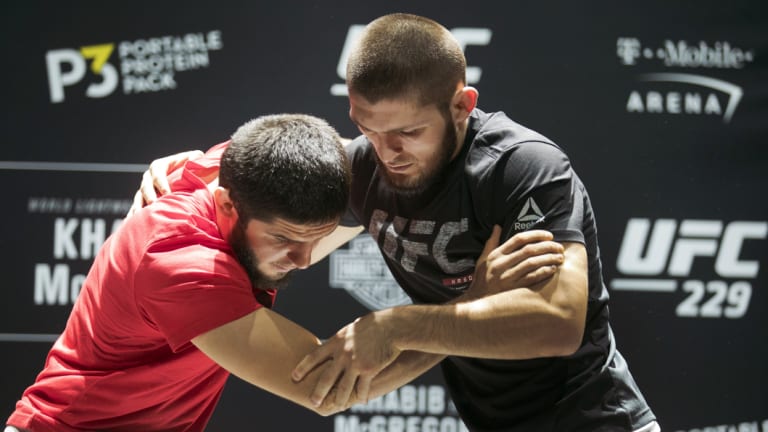 Training: Nurmagomedov (right) will want to turn the fight into a wrestle.

"People have to wait for Saturday night. It's a very interesting fight, stylistically.

"You have to improve yourself as champion because I've noticed a lot of champions … they change with (the acclaim of) a lot of (public) appearances and the money.

"These things can change your skills. You have to be focused."

Bisping, for now, isn't buying those projecting that the precipitous downfall of McGregor begins this weekend.

The last time McGregor fought on a stage like this, it was a financial venture, getting outclassed by Floyd Mayweather Jr via 10th-round technical knockout in August 2017 for $US100 million ($141m).

"Conor didn't take a lot of time off. He fought Mayweather in one of the biggest fights of all time," Bisping said.

"He's always in the spotlight. He's an egomaniac. And in a scenario like this, that helps you. 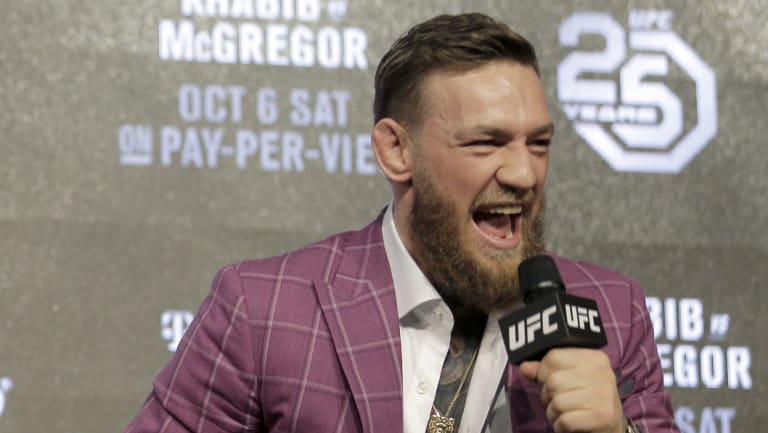 McGregor has been one of the biggest drawcards in UFC history.

"He's so full of confidence. He hasn't been beaten in the octagon in more than two years.

"Getting back in there is going to feel like yesterday. Look at him. He walks around like he's the boss.

"He'll have a ton of Irish people (supporting him). Ring rust is a mental thing, but if your mental game is strong, it won't be an issue."