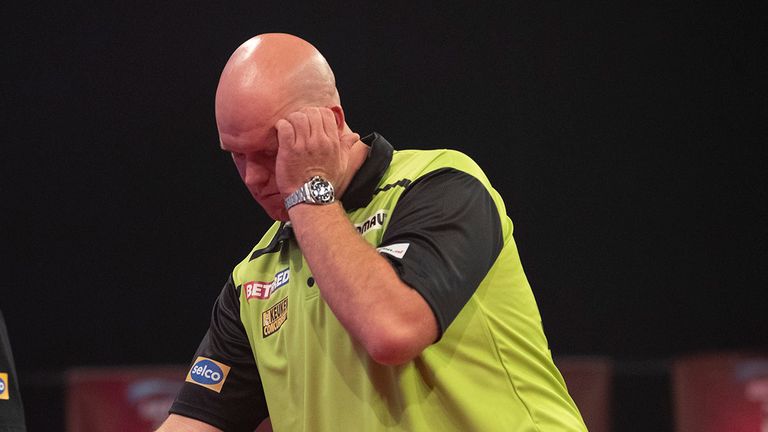 This followed a 7-3 loss to Glen Durrant the previous night, coming a month after his underwhelming showing at the World Matchplay.

So is the world number one in trouble?

“I think he is [struggling],” opined Wayne Mardle, in the aftermath of MVG’s loss to Anderson.

“Even when he beat Rob Corss, he was allowed to play. But he looked at ease then. He didn’t look at ease, didn’t look comfortable last night and again tonoight. And that’s the first time he’s lost to Gary in the last eight matches. “There’s just a lot of things about Michael’s throw that just oozed discomfort. He’s not the player he was, and you can see that he hasn’t got that swagger that he normally has.

“When players are at their very, very best, you can see the confidence in them. Michael hasn’t got that at the moment.”

Not the result or performance I wanted this evening. Credit to @GaryAnderson180 for the victory.

Reading some comments and being written off only makes me stronger and more determined.

Thank you my amazing fans 💚💚 tomorrow is a new day and will see you all tomorrow.

The Flying Scotsman wasn’t impressed with his own performance, but acknowledged that his opponent was off the boil

“I think I was in the same boat as him! It was [a case of] whose worse darts are going to win? I think I nicked it at the end,” Anderson said after the match..

“Michael has been phenomenal for donkeys years and years and years, since he won that first title in Dublin. He’s been on a roller-coaster. You’ve got to remember, that’s hard work. He’s up against tens and tens and tens of players now that can play great darts. So it’s still going to be harder for him. But he’s still number one in darts. “We used to have some cracking games. We used to absolutely batter each other up on that dart board. Whereas tonight, it wasn’t even a slug fest. ‘Let’s have a throw and see what happens’!

“Michael never got going. I know myself, I’m nowhere near 100% on my game. Usually Michael’s B-game, C-game beats most people. But I think he was down about the Z-mark tonight.”