Ben Cadden has been on Winx more than Hugh Bowman, but he has the harder job when he is on her – going slow. 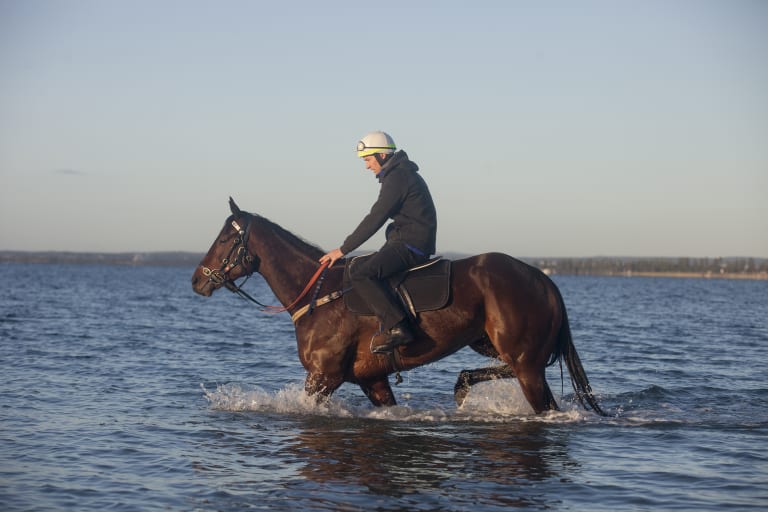 Easy does it: Ben Cadden and Winx have a paddle at Mascot.

“With her it is hard to actually do that. It takes a bit of effort from me. She will naturally run a 23 [for last 400m] on her ear.

“Slow work is probably the hardest thing to do with her.”

It might not be in a race, but Cadden is key to Winx’s preparation as she attempts to win a 26th straight race on Saturday. He gets a feel of the Forumla 1 power she possesses.

“Some of us don’t get to drive fast cars. I can only imagine it would be like, and riding her is as close as I get,” Cadden said. “In the morning, she still wants to go fast.

“The thing is, she can make up ground pretty quickly without you realising she is doing it.

“A lot of riders use beepers these days, and if you don’t use one with her you could think you are going 15s but you are going 12 [seconds to the furlong or 200m].

“It feels like a time warp when you ride her. It is like you are in another world.

"Whenever she works, she will just start building and building from the 600. She knows when to go.

“The toughest thing with her is going out on her when you are passing horses on the track. Once she gets close to one she wants to get passed it, and as soon as she does it she drops the bridle.

“Her competitiveness is unreal.”

Cadden has been Winx’s regular morning trackwork rider, except when Bowman comes for significant work. He knows better than anyone, and this preparation he picked her up from the spelling farm.

“You look forward to seeing her again. Seeing if she is still interested. They can lose interest as they get older,” he said. “There is no sign of that with her. She is as good as ever.” 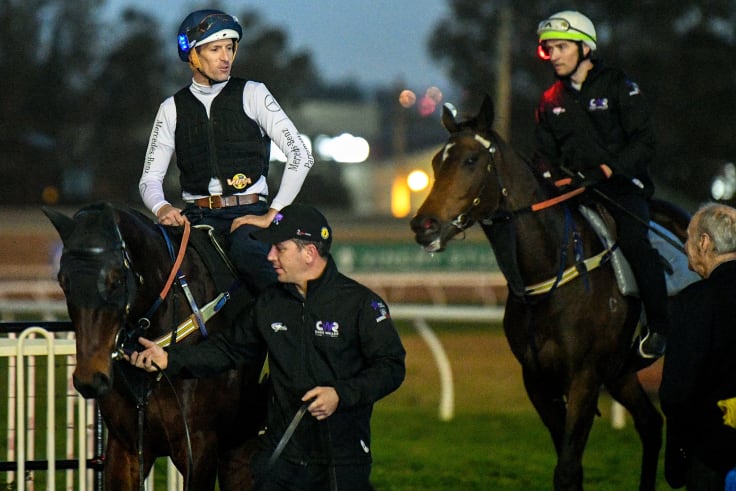 Enough said: Hugh Bowman on Winx and Ben Caddell on Unforgotten at trackwork on Thursday.

When Bowman arrives to ride Winx,  Cadden is usually on her work mate. The two horseman don’t need to talk much.

“Most of the time we just smile and wink at each other. I have worked with Hughie for so long now that when we gallop together we don’t say anything,” Cadden “We know how good she is and that she just does what she has to do.”

Cadden and Bowman had that knowing smile as they returned in front of the media on Thursday. Cadden had been on Unforgotten, which worked about 100m behind Winx.

“We talked, but not that much about her. He knows what I know,” Cadden offered.

Bowman was clear in what he is thinking when it comes to the seven-year-old version of Winx returning to the races.

“She knows it's game day, and judging on the way she felt this morning, I’m pretty excited at what lies ahead. She felt great and as strong as ever. I can’t wait until the race to be honest,” Bowman said.

“She seems to be a much more mature individual now, and she still seems to get a bit anxious in there, there is no doubt about it, but I’m confident we won’t have a repeat of last year,” Bowman said, recalling how Winx missed the start by six lengths on her return.

“This is short of her best distance and 1400m is probably her most vulnerable distance, or will be for this preparation, and the reason for that is she likes to go through her gears.

“The 1400m is more of a sprint distance, so she doesn’t have time to settle in the early stages and build like she does in the races over further.”

Winx is a $1.20 favourite to make it 26 in a row but Cadden will be at home for his daughter's birthday.