Veteran hooker Andrew McCullough admits his future at Brisbane may be on the line after their embarrassing NRL finals exit.

McCullough has also expressed regret after it emerged six players left the team hotel to play the pokies in a pub without coach Anthony Seibold's knowledge past 11pm on the night before their 58-0 elimination-final loss to Parramatta. 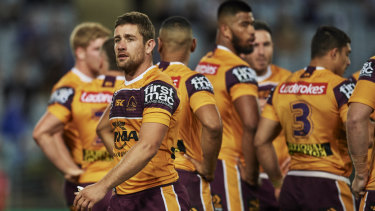 Brisbane’s finals fate is out of their hands.Credit:Getty Images

Some Broncos may pay a huge price for their late-night indiscretion, with club officials on Tuesday saying they would consider the players' behaviour when they carry out their end-of-season review, which will help determine their roster after the Eels rout.

McCullough distanced himself from being one of the Broncos who stayed up late to play the slot machines, but did admit to seeing teammates in a Sydney hotel the night before and saying nothing.

A veteran of 12 seasons with the Broncos, McCullough said he would await his fate after the players were called in for the review by Seibold on Wednesday morning.

"It (speculation about players' future) always comes up after a heavy loss," McCullough told Southern Cross Austereo on Wednesday.

"And being an older player within that team, that is just the way the game is.

"I am not blind to the fact that things may need to happen, but is it me (leaving)? I am not too sure."

McCullough was believed to be one of the six players in the hotel along with Matt Gillett, Anthony Milford, Corey Oates, Payne Haas and David Fifita.

McCullough appeared to already be sweating on his future with reports the veteran hooker was expected to be told to move on next year.

Fullback Milford is also believed to be on thin ice, after reports he was on his "last chance" after the 11-tries-to-nil loss to Parramatta.

Winger Oates is off contract and yet to re-sign for 2020.

And it is a bad look for Gillett, who had been linked to the Broncos captaincy amid speculation skipper Darius Boyd would step down following their finals shocker.

Broncos great Darren Lockyer was gutted to hear players were playing the machines past 11pm the night before the sudden-death final.

"If you're any chance of winning that game, you need to be as best prepared as you can.

"Regardless of [whether] there's any drink involved, if you're out until 11pm the night before a game in an establishment like that, it doesn't set a good example of how much the game means to you."

Former Brisbane captain Kevin Walters said there was "clearly something not right" at Red Hill.

"I'm not sure sitting in front of a poker machine is in any way going to help you the next day," he told NRL Tonight.

"It was disappointing to hear that was happening the night before a game and the biggest game of the year."