THIS weekend sees the return of the Premier League and the highlight is without doubt the Manchester Derby – with City hosting United on Sunday afternoon.

After the first two match days of the season, you would have been forgiven for thinking that this derby match would represent a walkover for the home side. 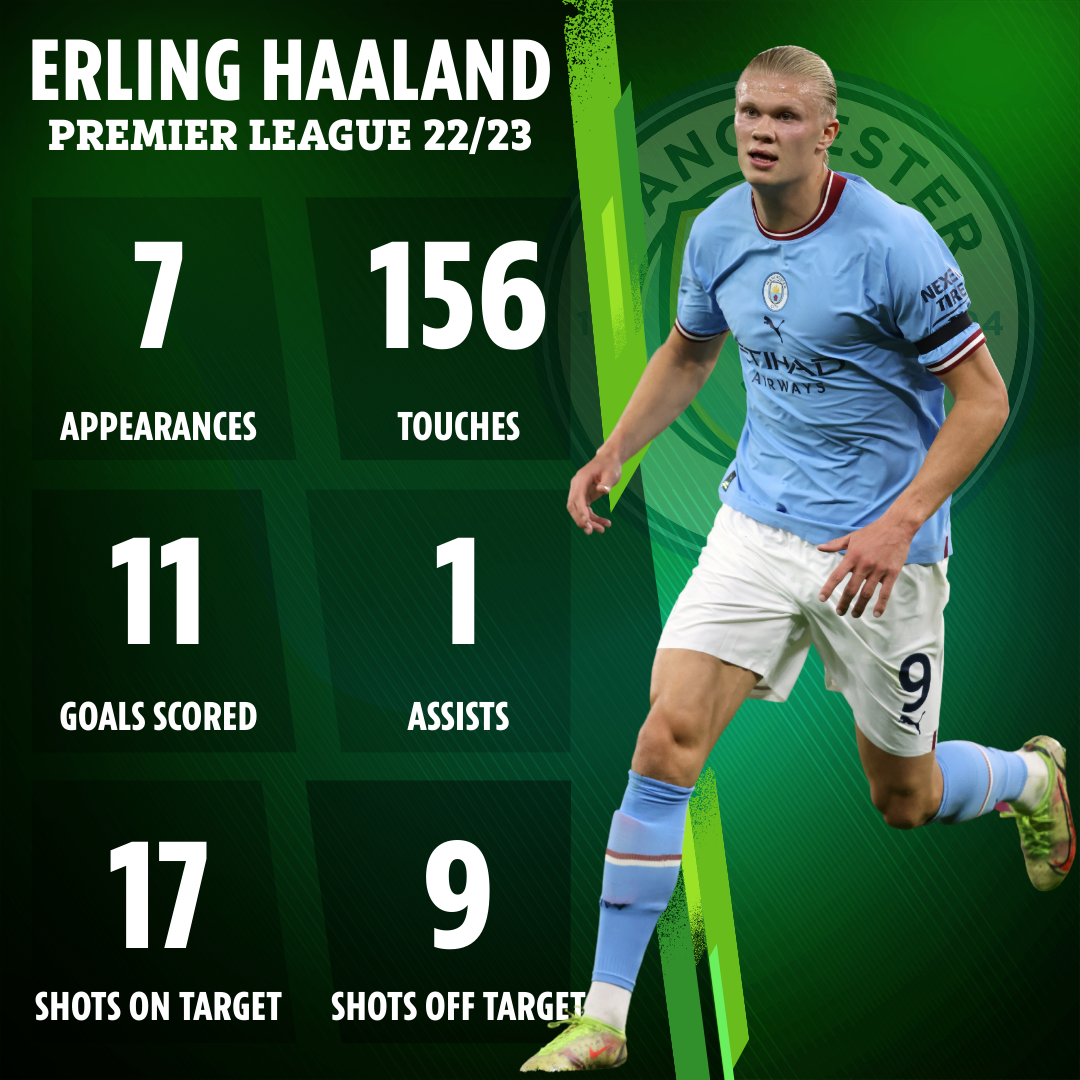 Since then, Erik ten Hag has impressed with his ability to make decisive decisions, dropping Harry Maguire and Cristiano Ronaldo to the bench, and stabilising performances.

While United have already shown the ability to beat strong teams – they beat league-leaders Arsenal 3-1 -a match against Pep Guardiola’s Manchester City side is still a daunting task.

While United sit in 5th place, City are 2nd, behind only Arsenal, and they are looking extremely strong as always.

read more on the derby 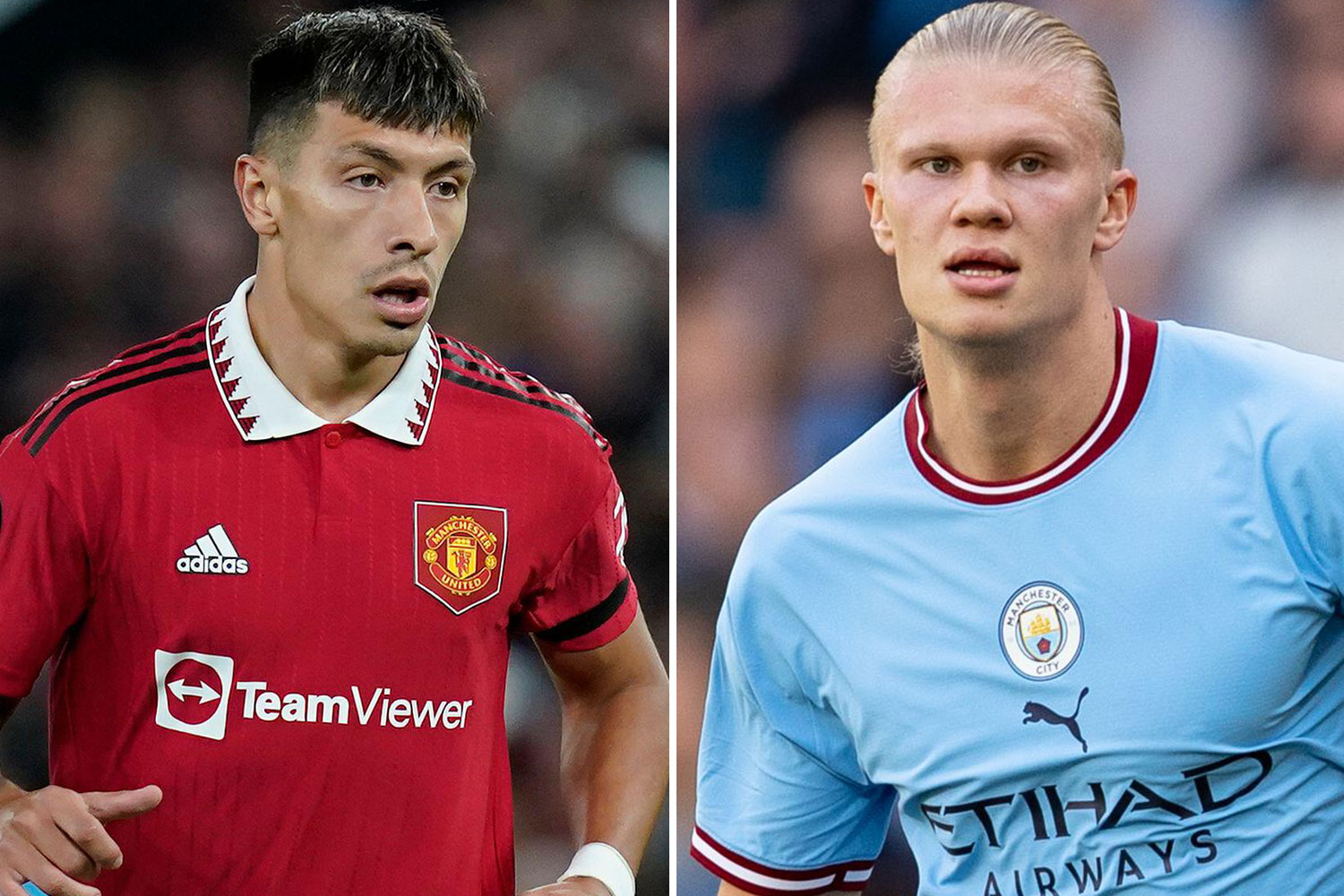 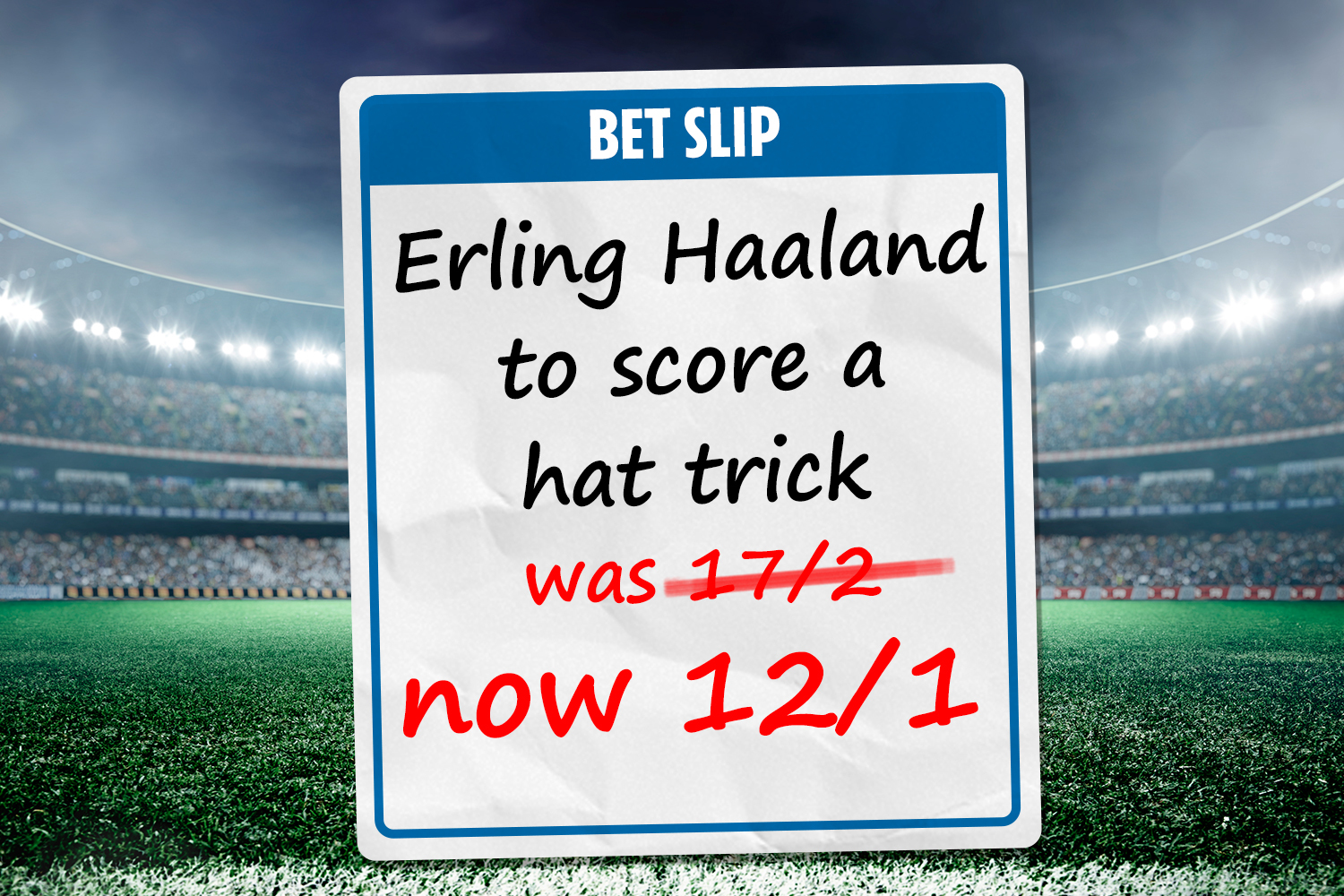 There was some noise around City coming into the season and the decision to sign the Norwegian international forward Erling Haaland led to some doubts as to how Guardiola would fit Haaland’s very specific style into the City system.

Fast forward to now and those doubters are looking well off the mark as Haaland has adapted to City and the Premier League immediately with 11 goals and 1 assist in 7 games so far.

City are looking confident and strong at this point.

This match represents a real test for Ten Hag and his Manchester United team but what are the key aspects of this match to look out for from a tactical perspective?

How do you solve a problem like Erling Haaland?

It is a mark of how impressive Haaland has been so far this season that he appears to be immune to Guardiola’s normal policy of heavy rotation, even for key players.

This is in part at least because City simply do not have another player who is able to play the striker role in the way that Haaland does. 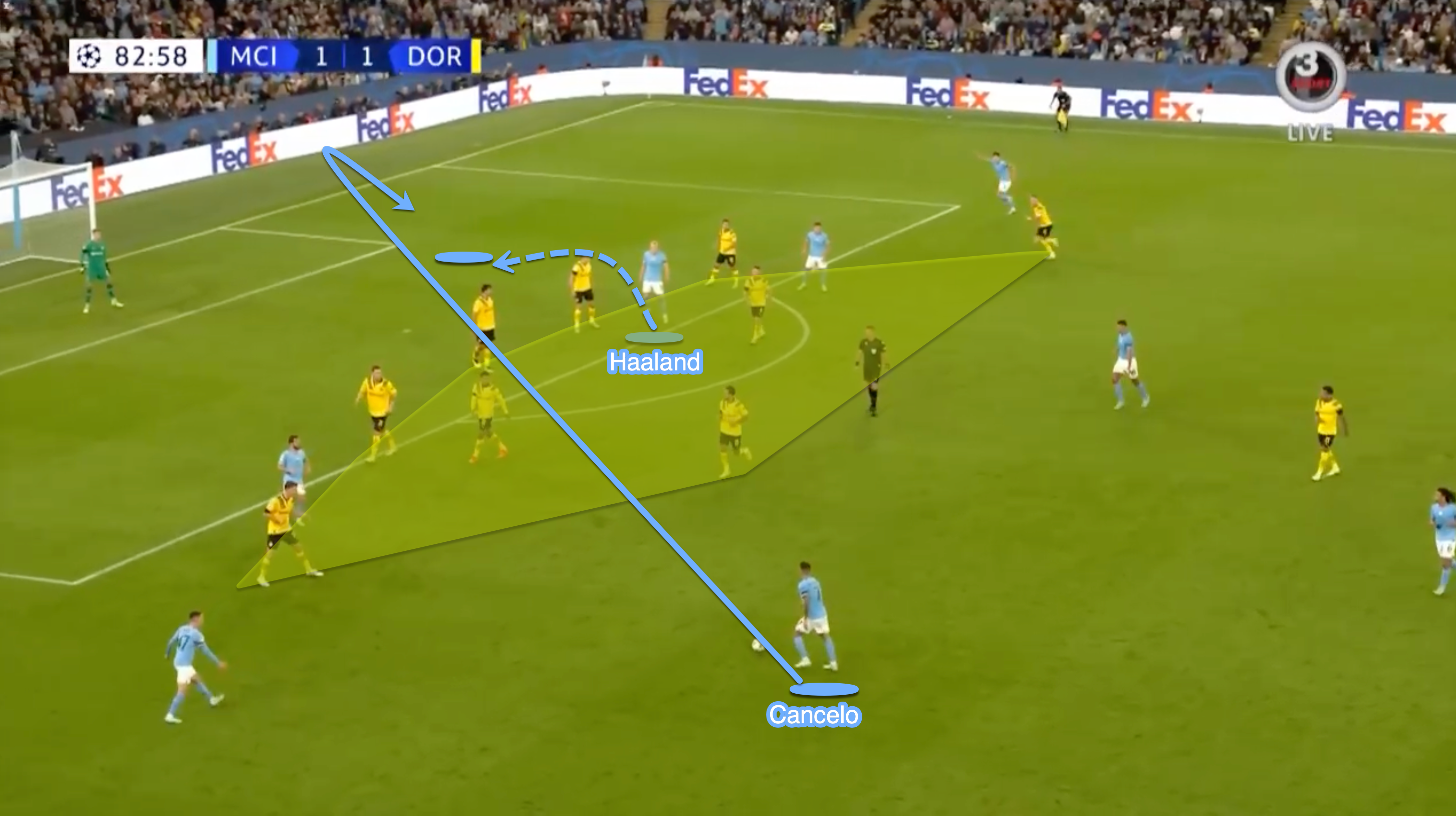 Last season we may have seen the likes of Bernardo Silva and Phil Foden used as a false nine and the Argentine international Julian Alvarez also arrived at the club in the summer.

But all of those are more mobile attacking players who do not profile as an out and out striker.

It has been striking watching City play with Haaland that the striker does not seem overly worried about joining in and building the attack.

That is not to say that he is not capable of doing so though, and Haaland has already commented that in his perfect game he would have five touches and score five goals.

You can see that happening at some point this season.

Haaland’s ability to play across the width of the penalty area and his movement and physical capacity to make runs that break the line at pace make him exceptionally difficult to defend against.

This extends to his movement in tight areas and in the penalty area.

There have already been numerous examples this season of Haaland being positioned in the area and making a run to attack space only to drop back out when the cross does not come. 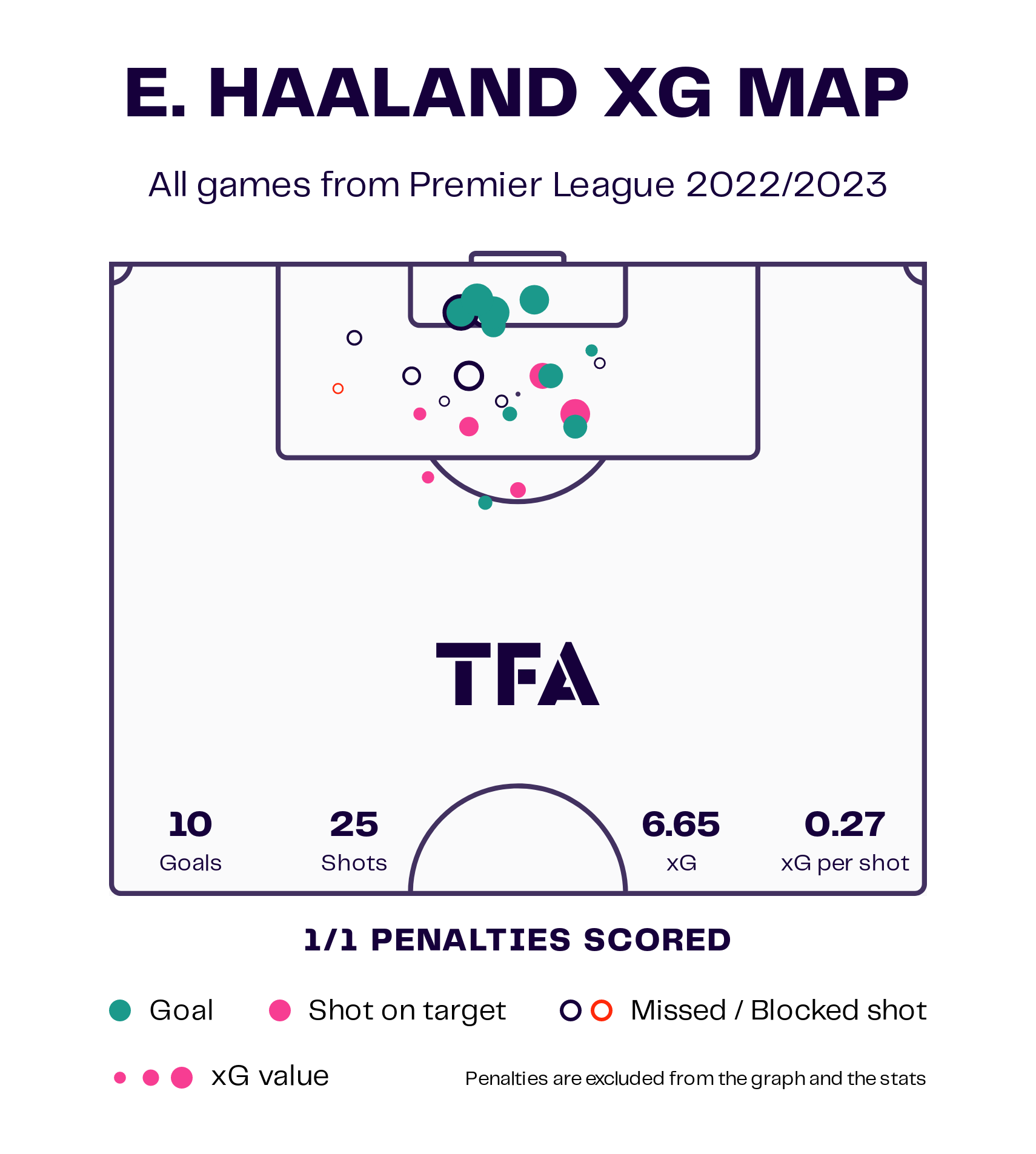 Crucially though he will then reset and make a second run and then a third run until eventually the ball comes in.

He is not a striker who loses concentration easily and this makes him exceptionally difficult to defend against.

How then can United defend against the threat of the Norwegian forward?

We are likely to see Ten Hag continue with a central defensive partnership of Lisandro Martinez and Raphael Varane and Martinez has actually faced Haaland before in last season's Champions League when Ajax played Borussia Dortmund.

Despite all of the concerns around Martinez’s height prior to the start of the season, he has actually impressed with his combative nature and willingness to defend aggressively in tight areas.

He will have to be at his best to deal with the pace and the movement of Haaland, especially in the area.

But United can also help their central defenders by not allowing City space to attack in the final third and get the ball into the area.

But don’t forget – Ivan Toney killed Martinez in the 4-0 win for Brentford and we all jokingly said “What will Haaland do to him?”

It’s time to find out.

While Haaland’s movement and finishing ability will pose a huge threat in this game there is still a need for City to find ways to create chances and find entries into the United area in this game.

City are still a side who are possession dominant, even without a striker who drops in to overload the centre and link play. 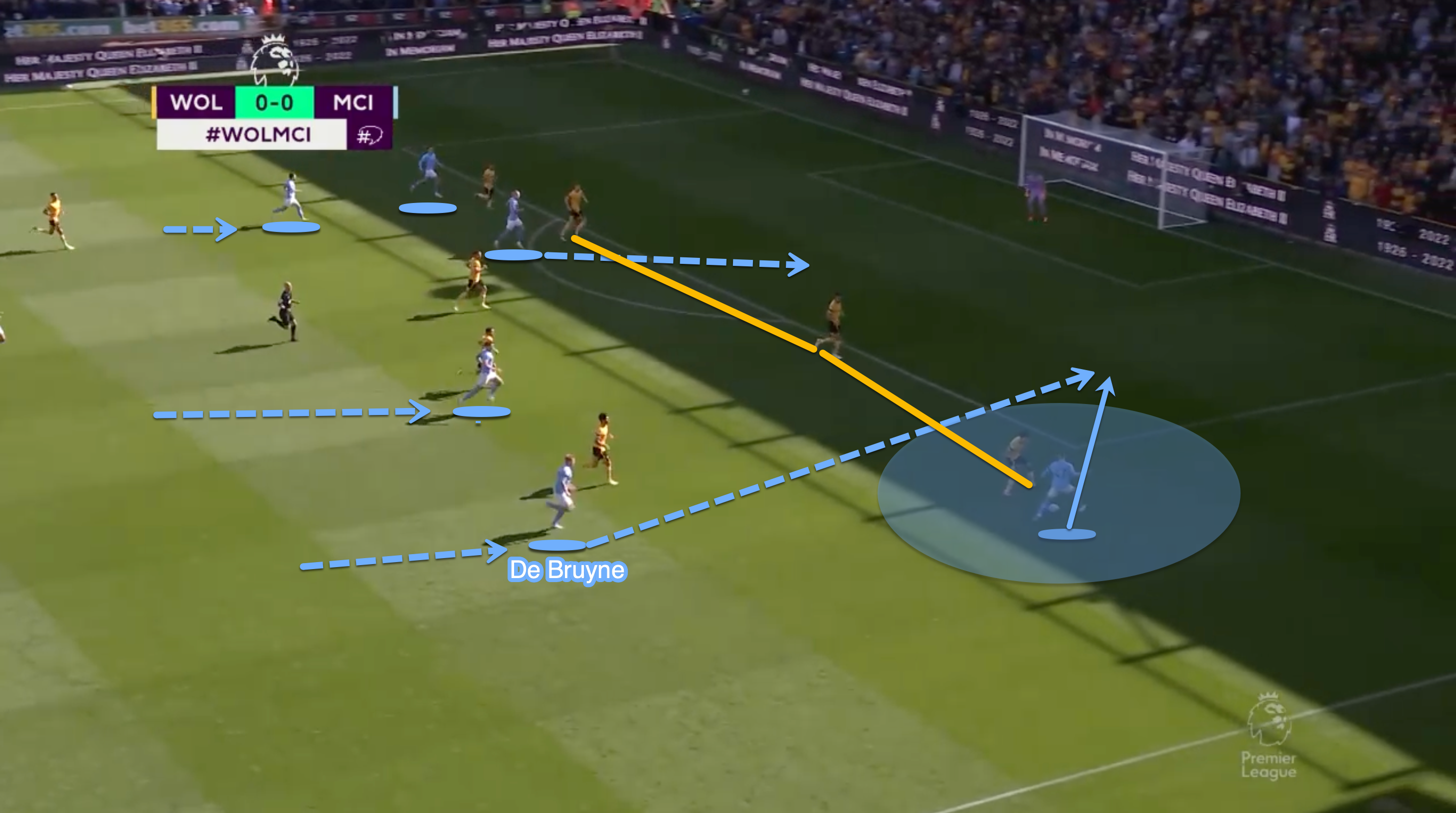 And with their fullbacks continuing to play in an inverted style they are extremely solid both in possession and then when having to defend against quick transitions from the opposition.

Crucially, City will look to create opportunities to isolate their wingers 1v1 against the United fullbacks.

Typically, teams would then look to use their fullback to overload with overlapping runs around the outside.

City are more of a threat in these positions to provide underlapping runs from their central midfielders and especially Kevin de Bruyne.

In these positions, the Belgian international midfielder is exceptionally dangerous and he is arguably playing the best football of his career at the moment.

He makes runs through gaps, which are created because the central defenders are drawn towards the threat of Haaland, and will attack the channels before looking for angles to shoot or cross the ball across the area. 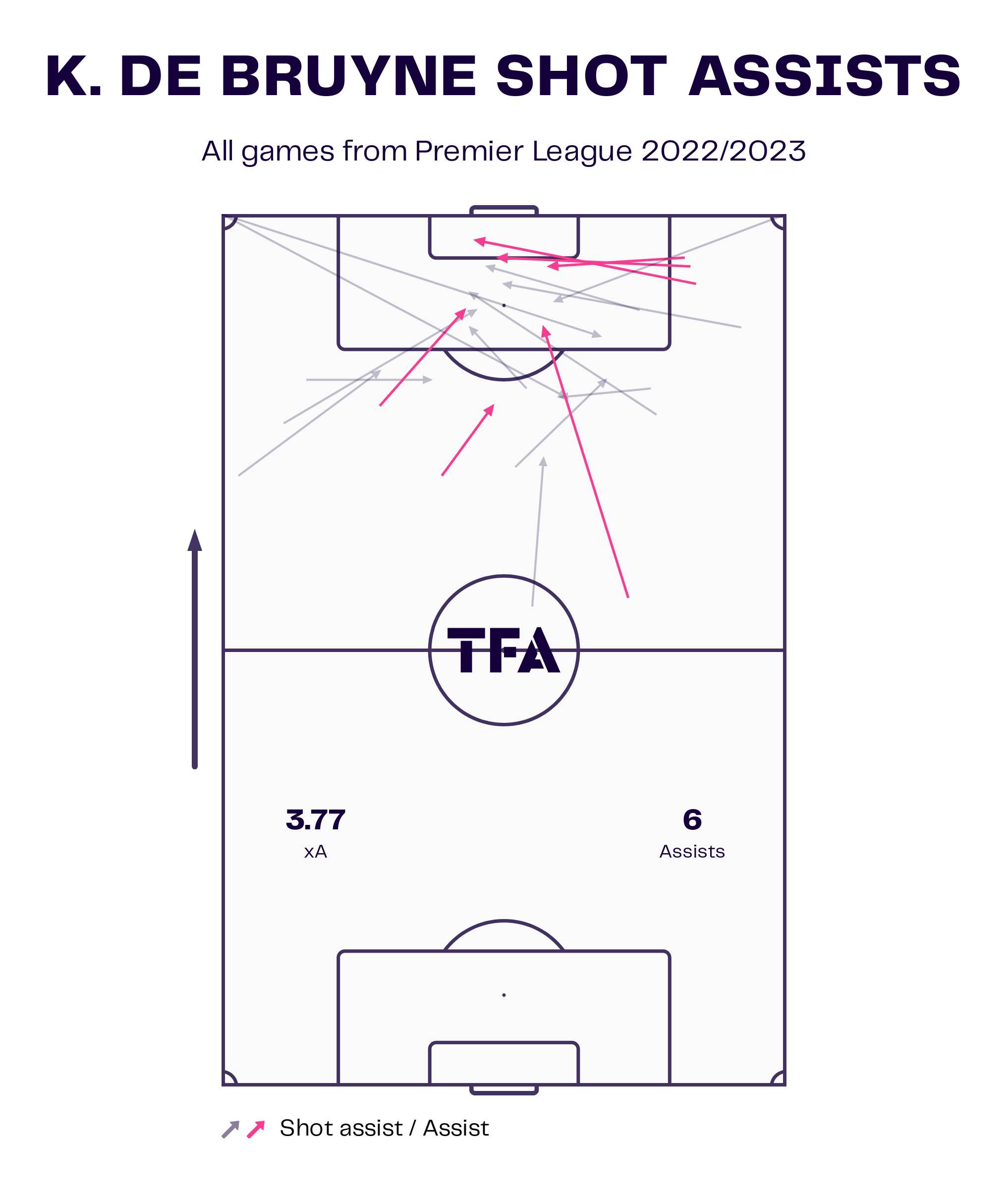 This match might be the right time for Ten Hag to introduce the vastly experienced Brazilian international midfielder Casemiro to the starting lineup as the deepest midfielder for United.

Since signing for United from Real Madrid, the Brazilian midfielder has been introduced slowly but his defensive understanding and ability to cover space and block central passing lanes could be needed to prevent City from finding ways to easily dominate the central areas and their attacking third.

After all, it’s him or McFred really – isn’t it?

Playing against the away side against one of the most impressive possession-dominant sides that we have ever seen in the Premier League it is fair to say that United will expect to lose the possession battle in this game. 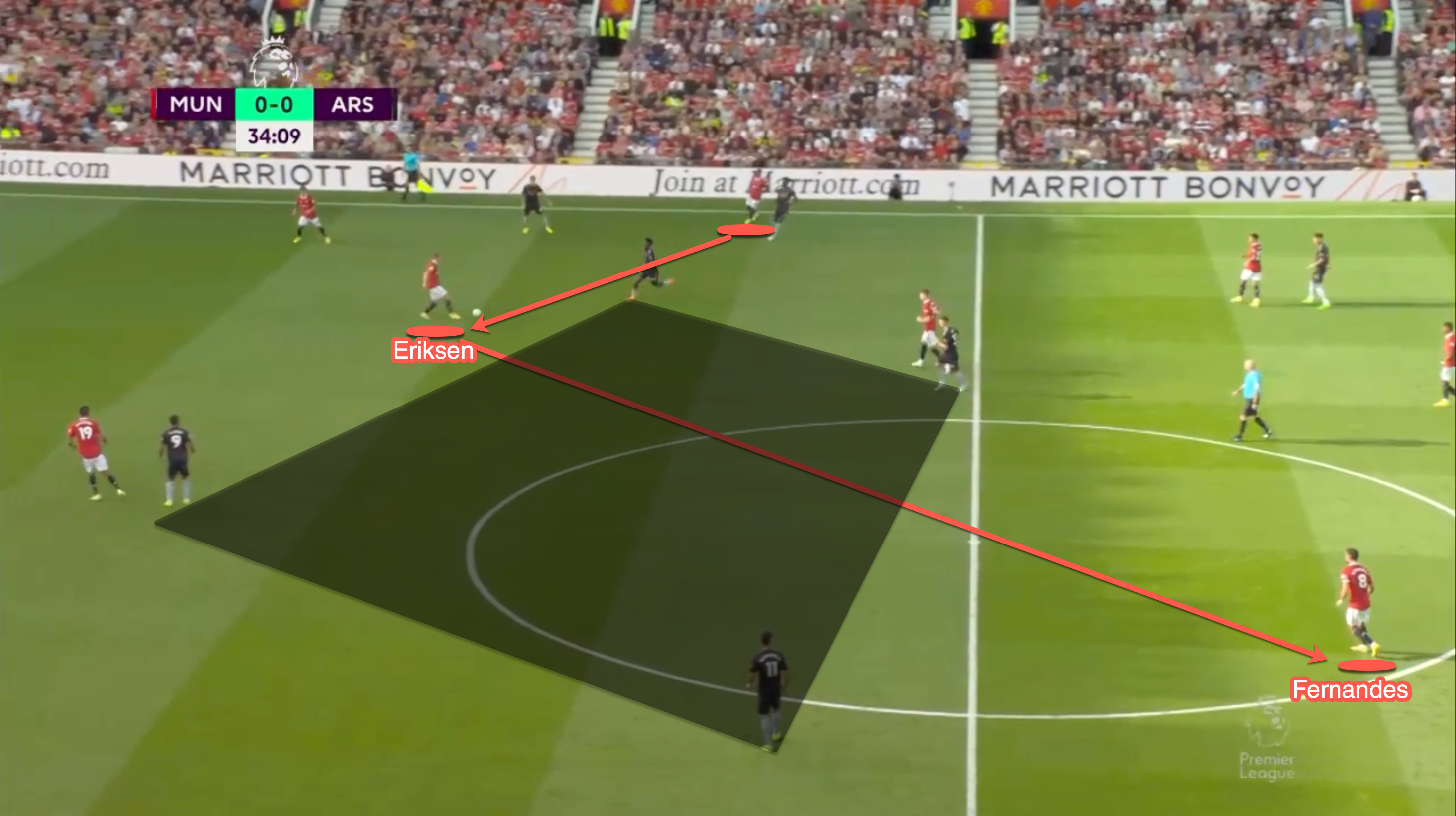 The key thing for United in this game, however, will be to ensure that they are able to take advantage of the opportunities that they have when they do actually get possession of the ball.

In order to do so, they will need to be aggressive in their passing to move the ball quickly through the defensive press of City and into dangerous areas.

City are typically strong in defensive transition but if United can find passing lanes to break the initial press they do have the attacking players to cause City problems.

Christian Eriksen will be exceptionally important in this game.

The Danish international is coming into the match off the back of a sensational game in the international break when he led his Denmark side to victory over France and United will hope that he will continue this form this weekend.

Eriksen is likely to play in deeper areas but whenever he gets possession of the ball he will look to be aggressive and vertical in his passing and in order for this to be effective United will need the likes of Jadon Sancho and Bruno Fernandes to find pockets of space that they can receive these passes in. 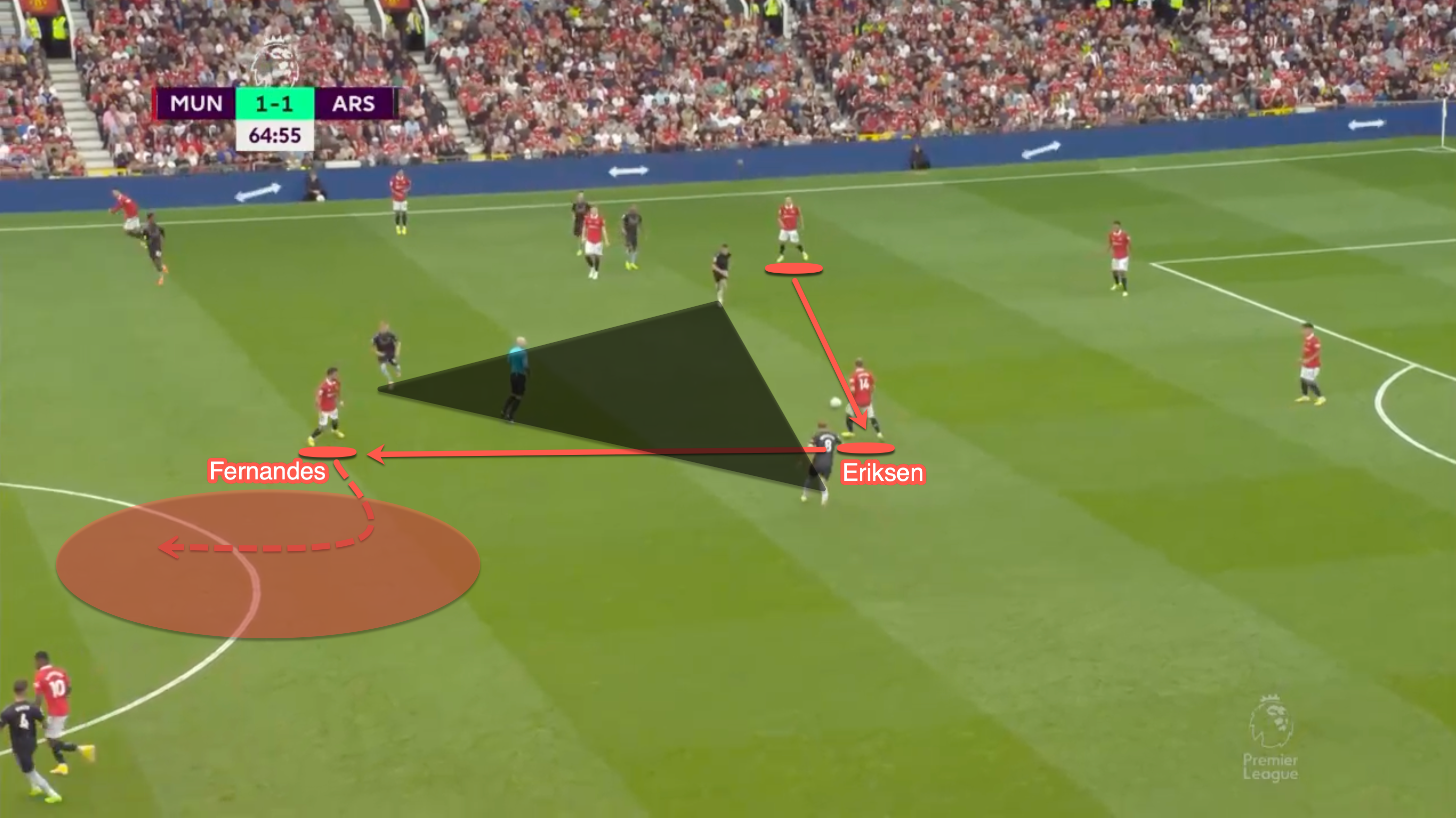 Bruno Fernandes will be important with his ability to link the attack through the thirds.

He will drop into pockets of space and allow Eriksen to play these vertical passes into space and through the thirds.

The key for United will be in ensuring that they are then able to take advantage of these situations when they do manage to break the City press and attack a disorganised defensive structure.

So what does all this mean?

City come into this game, like most games, as clear favourites and the emphasis will be on them to take the game by the scruff of the neck.

But, if United have a plan to deal with Haaland and all the movement around him then it’s not impossible to believe that Ten Hag’s lot couldn’t cause them a few problems on the break.

It’s just having a plan to stop Haaland and actually doing it are two entirely different things.

The October Total Football Analysis Magazine is hitting the digital bookshelves on Tuesday, October 4th – pick up your copy here.