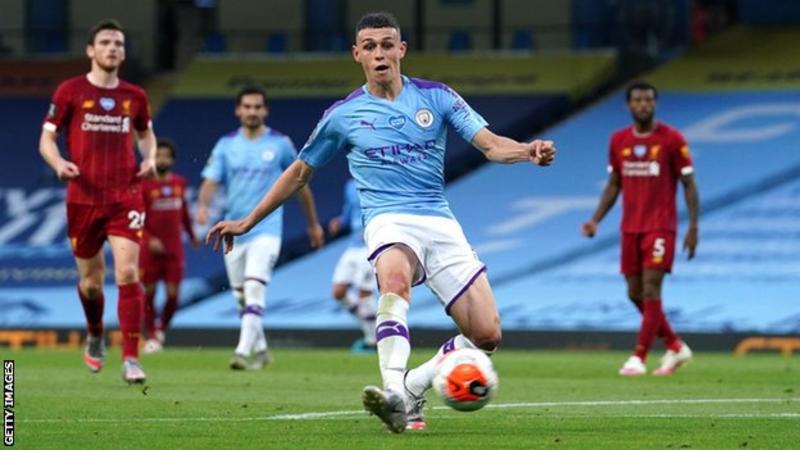 Jurgen Klopp’s side ended an agonising 30-year wait for the top-flight title when City lost at Chelsea last week, but were resoundingly hammered on their return to action.

The Reds, who were given a guard of honour by the hosts before kick-off, could have taken the lead at Etihad Stadium but Mohamed Salah’s low drive cannoned off the post.

It proved costly as Pep Guardiola’s men took complete control with a devastating first-half display in which they scored three goals within 20 minutes.

The sublime Kevin de Bruyne converted the opener from the penalty spot after Joe Gomez hauled down Raheem Sterling and the England international finished off a swift counter-attack for the second.

Midfielder Phil Foden further enhanced his reputation as a star in the making, coolly slotting home before half-time following a quick one-two with De Bruyne.

City scored their fourth in the second half when Alex Oxlade-Chamberlain inadvertently slid the ball into his own net from Sterling’s low drive.

Manchester City have been champions for the past two seasons, pipping Liverpool by a point in 2018-19, and will have been frustrated at how they surrendered their grasp on the trophy in such meek fashion.

It is only the third time in 11 campaigns as a manager that Spaniard Guardiola has not ended the campaign by lifting the domestic title at either City, Barcelona or Bayern Munich.

A close contest was expected between the top two sides in England, but it turned into an absolute stroll for City and pointed to signs that they will aim to come back stronger next year.

De Bruyne pulled the strings and was unplayable at times with his array of passing, while Foden highlighted why he is a ready-made replacement for the departing David Silva with his intelligence both on and off the ball, contributing a goal and an assist.

The home side may be disappointed to have scored just the four in a dominant showing with Sterling seeing a shot deflected wide and Foden having a low strike cleared off the line by Virgil van Dijk.

Riyad Mahrez came off the bench and thought he had netted a fifth with a low drive at the near post, but the effort was ruled out by the video assistant referee for handball in the build-up.

Though they kept a clean sheet this time, City have struggled at the back by conceding 33 goals in 32 league games, and may well look to use the money from Leroy Sane’s sale to Bayern to add a new centre-back.

Having already claimed the Carabao Cup and reached the semi-finals of the FA Cup while remaining in contention in the Champions League, City have plenty to look forward to from now until the end of the season and could well finish with another treble of trophies.

German manager Klopp has turned Liverpool into a footballing force since taking over in 2015 and finally delivered the one trophy the players, staff and supporters have craved the most – the Premier League.

Despite suffering just their second league loss of the campaign, clinching the title with seven games to go is the earliest any team in English top-flight history has managed to achieve the feat.

Having thrashed Crystal Palace at Anfield on 24 June and become champions the following day, Liverpool may point to a week of celebrations for their off-day in Manchester.

The Merseysiders started sharply, pressing and harrying their opponents and even striking the post through Salah on 20 minutes, but capitulated once the first goal went in and never managed to recover.

The Egyptian curled another effort straight at Ederson, who was barely troubled by the subdued Sadio Mane and Roberto Firmino.

Liverpool will want to pick themselves up quickly for their remaining six games and not let their superb season fizzle away.

Writing in his BBC Sport column, former England striker Alan Shearer said that Liverpool had taken City’s trophy and now have an eye on their records too.

Here is what Liverpool can still achieve: 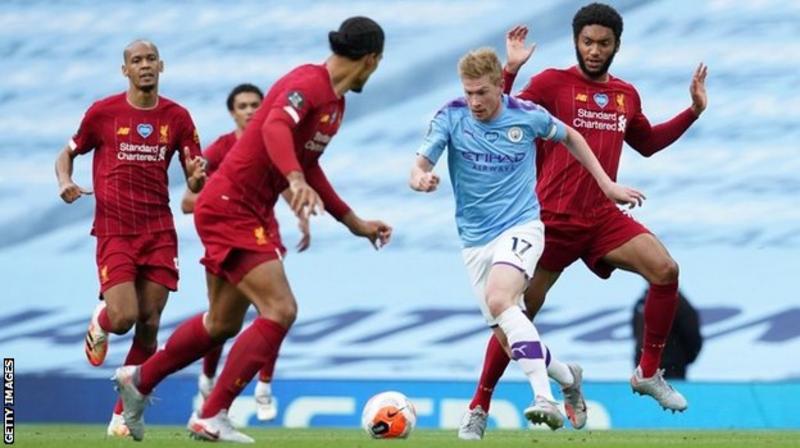 ‘They didn’t come here to celebrate’

Man City boss Pep Guardiola said: “I’m delighted. Congratulations to the team, we beat the champions with the quality they have.

“I saw in the guard of honour how incredibly focused they were, how they shouted. I saw their faces, that’s why they’re champions.

“They didn’t come here to celebrate. They’d drunk enough beers and they came here to compete.

“So the chances we created, to beat them 4-0, it was so important for preparing against Arsenal and Real Madrid.”

Liverpool boss Jurgen Klopp told Sky Sports: “Is the game important to us? I saw a brilliant attitude.

“They were quicker than us in mind. We lacked fluidity. Against Man City you have massive problems. We had moments. We had chances, we didn’t use them. The result we have to take.

“If you want to lead this story in direction we were not focused, then do it. I liked my team’s attitude. Isn’t it nice another team can be champions when Man City can play so well?

“Man City are incredible. I saw their season, they didn’t play a bad game.”

Manchester City host Southampton on Sunday (kick-off 19:00 BST), while Liverpool are home to Aston Villa on the same day (16:30).

De Bruyne the key for Man City – the stats

GOAL OVERTURNED BY VAR: Riyad Mahrez (Manchester City) scores but the goal is ruled out after a VAR review.

Rodrigo (Manchester City) wins a free kick in the defensive half.

Attempt blocked. Mohamed Salah (Liverpool) left footed shot from the centre of the box is blocked. Assisted by Divock Origi.

Neco Williams (Liverpool) wins a free kick in the defensive half.

Attempt missed. Kevin De Bruyne (Manchester City) header from the centre of the box misses to the left. Assisted by Riyad Mahrez.

Attempt missed. Riyad Mahrez (Manchester City) right footed shot from the centre of the box is close, but misses to the left. Assisted by Kevin De Bruyne following a fast break.

Kevin De Bruyne (Manchester City) wins a free kick in the defensive half.

Attempt saved. Mohamed Salah (Liverpool) left footed shot from the right side of the box is saved in the bottom left corner. Assisted by Neco Williams with a cross.

Attempt blocked. Sadio Mané (Liverpool) right footed shot from the left side of the box is blocked. Assisted by Divock Origi.

Attempt missed. Phil Foden (Manchester City) header from the centre of the box misses to the right. Assisted by Benjamin Mendy with a cross.

Attempt missed. Raheem Sterling (Manchester City) left footed shot from the centre of the box is close, but misses to the left. Assisted by Kevin De Bruyne following a fast break.

Attempt blocked. Divock Origi (Liverpool) right footed shot from the left side of the box is blocked. Assisted by Mohamed Salah.

Attempt missed. Kevin De Bruyne (Manchester City) right footed shot from outside the box is close, but misses to the right. Assisted by Riyad Mahrez.

Attempt blocked. Alex Oxlade-Chamberlain (Liverpool) right footed shot from the right side of the box is blocked. Assisted by Mohamed Salah.

Attempt blocked. Roberto Firmino (Liverpool) left footed shot from the centre of the box is blocked. Assisted by Sadio Mané.