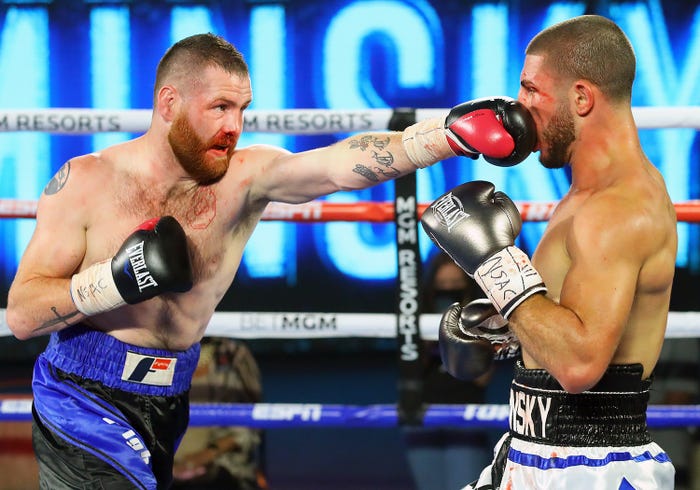 Lockdown cult hero Clay Collard wants to be one of those rare beasts who can win world titles in boxing and mixed martial arts.

The former UFC athlete is signed to the Professional Fighters League (PFL), but as the PFL postponed its 2020 season because of the coronavirus pandemic, Collard fought under Top Rank's boxing banner through its residency of events at the MGM Grand Conference Center in Las Vegas — colloquially known as the bubble.

Collard's exciting fighting style and winning ability attracted the wider boxing industry's attention, and he returns to the bubble Saturday for his sixth match of the year.

"I've been working hard since a young kid at this, so it's great to finally get a bit of credit," Collard told Insider ahead of his middleweight fight against Quincy LaVallais, which is a rematch from a 2019 draw the 27-year-old disputes to this day.

Before 2020, Collard's boxing record was four wins (one knockout) against one loss and three draws.

Bektemir Melikuziev last stopped him in November 2019. Collard told us he took the fight on two days' notice at a weight he does not normally campaign at — 175-pounds. "It always sucks to lose," he said.

But fast forward a year and he's now tallied nine wins (four knockouts) in total, has a hard-fought victory over David Kaminsky, and has captivated the attention of fight fans as "one of the most popular boxers of the summer," as recently reported by Insider.

For Collard, there's no real secret to his success. "I just keep winning, keep taking tough fights. I'm going after the tough guys and I'm not trying to pad my record.

"I want to fight the top competition and sometimes that means you're going to lose. We win and we learn."

Collard returns to the ring Saturday for his fight with Lavallais. He is confident of victory as he believed he had the beating of the Louisianan the first time around and said he's only improved since then.

"Honestly, I thought I had the fight won," Collard told us. "When they called the draw, I was really surprised.

"Every single fight, you get better and for me, the message was to just slow down. I think I was rushing and trying to make things happen. I was trying to force things in the fight that weren't there.

"Now it's about being calm and going with the flow, I guess. I've been working hard. I'm well-prepared. I just need to land my shots, and I'll eventually hurt him, so I'm just going to fight like Cassius Clay fights. I'm all in, man."

Though he's continued to practise mixed martial arts in the background, Collard has enjoyed the six training camps this year where he's been drilling boxing techniques.

This, he told us, will benefit him when he returns to MMA next year when the PFL 2021 season begins in April.

"Honestly, I think getting back to my roots and back to my boxing has benefitted my all-round game," Collard said.

"I still haven't stopped training mixed martial arts but I can tell the difference in sparring. My eyes are better. I can see things coming at me sooner, I'm hitting harder, and my hand-speed is faster.

"So, I think it's improved my fight game tremendously. I'm just excited to get back to PFL, MMA, and showcase my skills."

Though he's a striker at heart and has not tested beyond a white belt in jiu-jitsu, Collard said he remains confident of finishing MMA fights on the ground or the feet.

"I think everybody in PFL is going to try to take me down — they're stupid if they don't," he said.

"I think I am one of the best strikers in the game today, and I decided to go to PFL to prove that but I still think I'm dangerous anywhere.

"If they want to lean more toward the striking, that definitely benefits me. I consider myself more a striker but you got to be well-rounded and well-prepared for anywhere the fight goes in mixed martial arts."

Unlike other mixed martial arts firms where athletes vie for rankings in standalone matches, the PFL has a league structure with a play-off and a post-season.

Every year builds toward a big New Year's Eve show where 12 fighters compete against one another in different weight classes. The six winners leave the arena with a $1 million check each.

The lightweight division's current champion is Natan Schulte, and Collard wants to fight — and beat — Schulte straight away.

"Obviously, I want to take down the champ and I hope I match-up with him first so I can take him out early," Collard said, living up to that statement he only wanting tough fights.

Collard added that he'd then want to fight his friend, Johnny Case, as the PFL recently signed his Las Vegas training partner.

"Mr. Hollywood and I trained together, sparred together, rolled together, and so it'll be fun to get in there and actually fight," said Collard.

"Those are the two I'm excited to fight. One, because he's the champ and I'm excited to take him out, and the other because we've exchanged blows as friends, and I hope we can do that in a fight.

"That's just the business, man," Collard said when we asked whether it would be awkward punching a buddy in the face.

"It's just another day in the office. I don't care if we're friends. That's my belt we're working towards and he wants that belt, too. When we get in the cage, it's just business, I'll beat you up, and then I'll shake your hand after."

Though he is contractually obliged to compete in the PFL, Collard told us he'd love to balance his MMA day job with one in which he could venture into the boxing ring and build enough momentum where he can secure a title shot.

"I would like to box, still, throughout the year when we have break [in the PFL season]," he said.

"Eventually, I'd like to win a belt in boxing and mixed martial arts.

"So I'll focus on the PFL season, win that belt, then come back to boxing, talk a little crap and hopefully get a big fight."

Collard fights LaVallais in an eight-round middleweight match on ESPN+ before the broadcast shifts to ESPN for a three-bout main event.