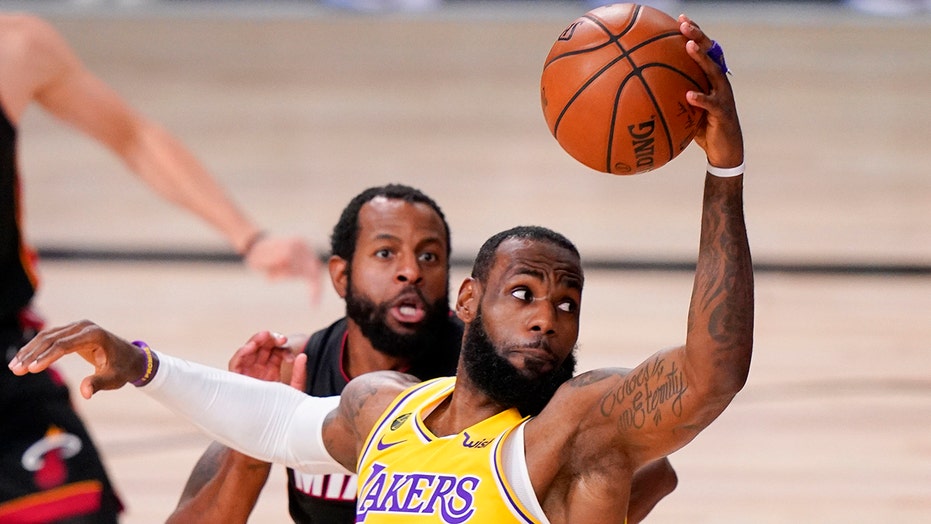 The Los Angeles Lakers had to grind it out in Game 4 against the Miami Heat but moved closer to an NBA championship with the win Tuesday night, 102-96.

Anthony Davis hit the dagger three-pointer to put the Lakers up nine points with under 40 seconds left. Davis added a big fourth block of the game on Jimmy Butler to kill any kind of momentum brewing for Miami at the end of the game.

Davis’ big plays along with LeBron James’ play throughout the night helped the Lakers to win. Los Angeles also got a clutch three-pointer and an aggressive layup in pivotal moments from Kentavious Caldwell-Pope.

Davis finished with 22 points, nine rebounds and four assists in 42 minutes. James had 28 points, 12 rebounds and eight assists in 39 minutes. Caldwell-Pope played 32 minutes and had 15 points and five assists.

The Heat appeared to be playing at a different pace after a momentous Game 3.

They kept up with the Lakers for the most part but couldn’t turn the corner when it counted. Butler missed a big wide-open three-pointer in the corner that would have brought them at the Lakers’ door. Key missed shots from Kendrick Nunn would also hurt down the stretch.

LEBRON JAMES WALKS OFF COURT IN FRUSTRATION BEFORE GAME 3'S END: 'THIS IS NOT A GOOD LOOK'

Butler finished with 22 points, 10 rebounds and nine assists in 43 minutes. Rookie Tyler Herro contributed 21 points had a big part in keeping the Heat in the game down the stretch.

Bam Adebayo played Game 4 after missing Games 2 and 3 with a neck injury. He had 15 points and seven bounds.

Los Angeles moves within one game of its 17th NBA title. James is also close to getting his fourth ring.