When Lani Pallister hauled herself out of the pool at the Australian Swimming Championships in Adelaide, having just gone wire-to-wire in the 800m freestyle to book a spot at the World Championships and Commonwealth Games, she made a beeline for the nearby coaching box.

The first face she saw was none other than a beaming Dawn Fraser, who had just watched the 19-year-old lay down a personal best (8:17.77s) to become the second-fastest woman over the distance in Australian history, behind only the imposing Ariarne Titmus.

Pallister’s gaze shifted to her mother and co-coach Janelle, who was being congratulated by her peers and colleagues. Her daughter waited patiently, then tapped Janelle on the shoulder to get her attention. The embrace they shared was long and deep, signifying a bond that had been tested and strengthened under the most trying of circumstances.

Only a select few knew of Pallister’s troubles over the previous 18 months. She had resolved to keep it from the public eye until she had safely made her way onto her first senior national squad. With that milestone now achieved, the words began to flow like water.

“Last year wasn’t the year that I wanted,” Pallister said. “It started with heart surgery and ended with an eating disorder. Bouncing back from that sort of disappointment has been remarkable.”

It was a lot of information packed into a single sentence. For Pallister and her family, it was an extended period of heartbreak, physical and mental travails and finally, a brilliant light at the end of a long, dark tunnel. 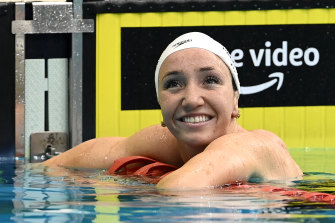 Lani Pallister takes in her start-to-finish 800m freestyle win at the Australian titles in Adelaide.Credit:Getty

Pallister had always loomed large on the radar of Australian swimming. She won 400-800-1500m gold at the 2019 Junior World Championships and the Tokyo Olympic Games seemed like the natural next step.

So when she wasn’t able to qualify for the team at the trials in 2021, it was clear something had gone amiss. Janelle, who works alongside supercoach Michael Bohl at Griffith University, only knew part of the story. Lani gave a small insight into her anguish on social media.

“Definitely not the week I had in mind and I have struggled with how to put it into worlds but I guess shit happens. A dream is still a dream.”

The first speed bump for Pallister was a diagnosis of supraventricular tachycardia (SVT), which can cause an irregular or elevated heartbeat. It is the same condition suffered by Kyle Chalmers, among other swimmers, and Pallister underwent the same operation to get things under control.

But while the procedure was a success, Pallister soon began to obsess over something else as she embarked on her recovery: food. She had convinced herself that to swim fast, she had to shed weight, and began comparing her physique to other athletes.

“In March, I was diagnosed with SVT, so I had a cardiac ablation. That was the start of a snowball effect. I stopped eating in pursuit of trying to be skinny instead of fit and strong, like the majority of athletes are,” Pallister said.

“I look at Ariarne (Titmus) and a lot of the other girls, I look at their bodies and think ‘wow, I wish I looked like that’. Being younger last year, not being as mature in my body, I got stuck in this idea that I need to eat less to swim better because I’ll be lighter.

“I went through trials and had probably the worst year of my life. A big, big disappointment. I walked away from that not knowing what I wanted from the sport any more. I had Mum put me back together. Now I’m back and better than ever.”

Lani Pallister and her mother Janelle at the Australian trials in Adelaide this week.Credit:Delly Carr/Swimming Australia

To see Pallister now is to look at a vision of youthful, athletic excellence. She is tall, with long legs, strong, fit and confident. It’s difficult to believe she could have looked in the mirror and seen anything else but such is the insidious nature of eating disorders.

“When we went to hospital for the heart surgery, it was scary for Lani and scary for my husband and I as parents,” said Janelle, a former Olympic swimmer and Commonwealth champion. “But we didn’t really know a lot about the other stuff that Lani went through until after trials. It was just about finding each little piece of the puzzle and trying to put it all back together in a nice, gentle way.

“I don’t think I’ve really been breathing for the past six months. I feel like I’ve just been holding my breath the entire time.”

Eating disorders have been an ongoing issue in swimming. An independent report commissioned last year into the treatment of female athletes said skinfold tests should be banned, while weighing swimmers in front of squad mates, once a common practice, should never happen again.

For Pallister, it was the brave admission by champion backstroker Emily Seebohm in early 2021, who revealed her own battles with weight and body image, that has prompted her to speak out so courageously.

“I went to a psychologist first, so that was one of the biggest steps for me moving forward,” Pallister said. “I had Emily Seebohm training in my program last year, so her support was phenomenal.

“I don’t think injury or illness should define you, that’s why I didn’t really want it to come out before I had made the team and foreshadow what I was doing here.

“But you have to be open and honest as an athlete. I know when Emily came out with it, I knew I needed to talk to someone. I’m so grateful to have my Mum put me back together and Michael Bohl. They have been amazing.”

Titmus didn’t race the 800m at trials but will meet Pallister in the 400m near the end of the meet, a race in which Titmus is the Olympic champion. She set the benchmark in Tokyo. Now Pallister is ready to emerge from the wings and make a mark of her own.