Nick Kyrgios has a level of talent perhaps never seen before, former champion Chris Evert says of the Australian player who will start next week's US Open a relatively lowly 30th seed.

Kyrgios, 23, has teased and tantalised his fans in five years as a professional, making headlines by beating Roger Federer, Novak Djokovic and Rafael Nadal the first time he played them. 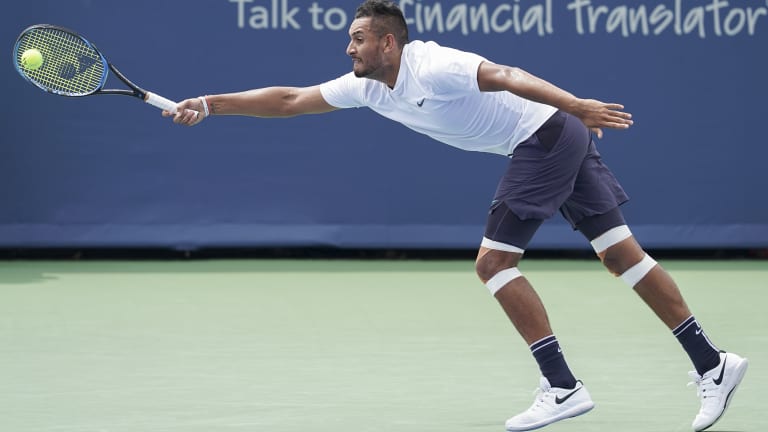 Nick Kyrgios has talent to burn, but does he have the will to win?

As often as not he has disappointed, however, losing to players with clearly inferior talent, and displaying an unfocused attitude instead of ruthlessly dispatching his opponents.

"It's frustrating to watch him," 18-times grand slam winner Evert said on Wednesday ahead of the US Open, where she will be part of ESPN's coverage.

"[He] brings talent to another level that we've never seen I don't think, in the tennis world.

"He's going to coast as long as he wants, as long as he can, but at some point I think we all who are fans of his and love his tennis are probably wanting this more than he is right now."

Former world No.4 Brad Gilbert describes Kyrgios as "too much of a showman".

"He's got immense talent but unfortunately he doesn't know how to use it at the moment," Gilbert said.

"He's become a bit of a prisoner to hitting tweener shots between his legs, imitating other players' serves.

"He needs a trainer, he needs a coach, and then he needs the ability to let them make the decisions for him," Gilbert added.

"If he does that, I think that his skill set is still better than probably anybody's, so those are the questions that he's got to learn to answer and want to do. But maybe he's happy doing what he's doing."

Evert also questioned whether Kyrgios is prepared to make the sacrifices to become a great.

"He's a complicated guy and I wonder if he just doesn't want to give up a lot," she said.

"To be the best to win grand slams, you have to make mental and emotional sacrifices, as well as physical.

"I think he doesn't train like the top men do, and I don't think mentally and emotionally he's at that level of the top players.

"But he's gotten by with not having to work that hard at any of those components.

The US Open starts in New York on Monday.