Virat Kohli had declared the Adelaide Oval his overseas batting paradise but it quickly became a nightmare after he fell to one of the great gully catches on the opening day of the first Test against Australia.

The Indian captain was confident his fast bowlers were ready to learn the lessons of past failures but he and his fellow batsmen failed to read the play book during a rugged first session when the tourists were keen to show intent but tumbled to 4-41 before lunch. 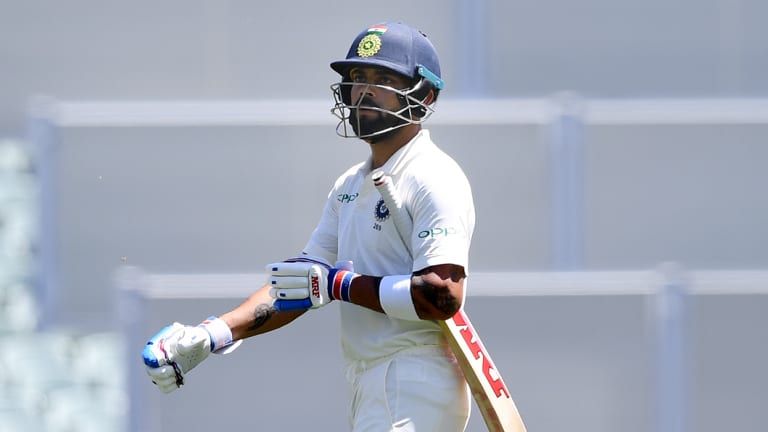 Kohli, the world's premier batsman averaging 98 in Adelaide, fell for three when he drove at a fullish delivery from Pat Cummins and was caught by a diving Usman Khawaja.

Khawaja has dropped 10 kilograms in recent months to become more agile at the crease but it has also helped in the field. The Kohli edge was a blur yet he still managed to take a step to his left and then dive, completing a stunning catch in his left hand. It reinforced how sharp his on-field focus was, in a week when his brother had been arrested.

It was also his second catch of such skill in recent weeks, for the Queensland captain completed a similar effort to dismiss Victorian Aaron Finch in their clash at the Gabba. This time, Finch, standing at slip, had reason to celebrate.

Khawaja's brilliance left the bruised tourists at 3-19 in the 11th over on a morning of carnage when they were accused of "shambolic" shot selection by former England captain Michael Vaughan. This less than 24 hours after Kohli had urged the batsmen to bring their "A game".

One man who did deliver was Cheteshwar Pujara, the No.3 batting rock who does not boast an Indian Premier League contract but understands what's required to prosper in the traditional format.

The patient Pujara posted his third ton against Australia, his previous two culminating in a double century, before he was run out by Cummins on what was to prove the final ball of the day as the tourists edged their way to 9-250 by stumps.

Cummins could not believe his good fortune when he had Kohli snapped up. In a statistical quirk, he has bowled only four deliveries to Kohli in his career but has dismissed the batting maestro twice, without having conceded a run. Cummins had dismissed Kohli for six during last year's Test in Ranchi, when the fast bowler joined the campaign mid tour, and Kohli missed the final Test because of injury.

While Kohli averages 49 against Australia in 28 innings, he has a modest 95 runs at 13.5 in his past seven innings against the home side. If this form continues, the tourists will struggle to claim a breakthrough series victory here.

Kohli wasn't the only Indian batsman guilty of an injudicious shot on a pitch featuring a thick coverage of grass and pace, bounce and swing for Mitchell Starc, Josh Hazlewood and Cummins. This meant the tourists needed to be circumspect but they too often threw their hands at the ball late and were caught behind the wicket.

Hazlewood sparked the crash when opener Lokesh Rahul sparred at a wide ball and was caught at third slip by Finch. Starc, having ramped up his speed into the high 140kms despite temperatures nudging 40 degrees, then extracted a thin edge from Murali Vijay. When Kohli, then Ajinkya Rahane fell, the latter snapped up at second slip by Peter Handscomb, a year of tumult was – temporarily at least – finally over for the Australians.

Vaughan, commentating on Fox Cricket, could not believe the manner in which the tourists had "gifted" their wickets to the Australians.

"India surely know in the first session you almost give it to the bowlers – get the bowlers into their second and third spell and then attack. Really poor planning by India," he said.

"Yes, you have to have a mindset to come out and play but the way the Indians have played today has been shambolic."

Former Australian batsman Mike Hussey concurred, declaring the tourists had attempted strokes they could get away with on their flatter home wickets but not on what had been offered in Adelaide, while former captain Ricky Ponting said the tourists had succumbed to pressure.

Australian bowling coach David Saker praised his attack for embracing their pre-match plans, that being to push the batsmen back on the crease with short balls then tempt them into sparring at wider deliveries. That Starc and Hazlewood had been strong in their bowling actions and not fallen away at the point of delivery was noted as another reason for their success.

It became more of a grind for the Australians after tea when the ball was soft and a baked pitch did not provide its earlier assistance but the introduction of the second new ball in the shadows of stumps has the hosts set to wrap up the innings when play resumes on Friday.