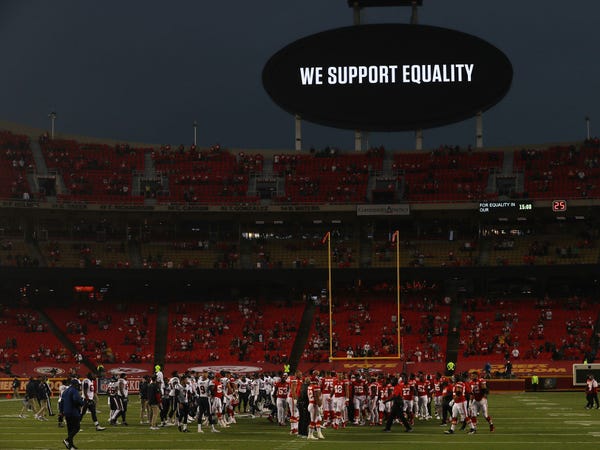 Kansas City Chiefs fans booed through a moment of silence dedicated to "the ongoing fight for equality," before kickoff of the team's opening game of the 2020 NFL season.

After the playing of "Lift Every Voice And Sing" and the national anthem, players from both teams met in the center of the field in a show of unity. The Chiefs PA announcer then called for a moment of silence "dedicated to the ongoing fight for equality," as players stood arm-in-arm.

Fans could be heard booing through the gesture.

Social justice issues have been at the top of mind for the league as it prepared to return to play, with the deaths of George Floyd and Breonna Taylor and the police shooting of Jacob Blake all looming large in the sports world in recent months.

On Twitter, fans called out those present at the stadium for booing through the moment of silence.

Across the league, teams plan to handle the national anthem and the league's gestures towards fighting for equality in different ways. The Chiefs were out on the field for the national anthem, with some standing arm-in-arm, others standing with their hands over their heart, and others still kneeling or raising a fist in the air. The Houston Texans opted instead to remain in their locker room as the anthem played.

On Thursday, the Miami Dolphins announced that they would not take the field for the anthem for their Sunday game against the New England Patriots.

"No more fluff and empty gestures," the Dolphins told the league in a video.