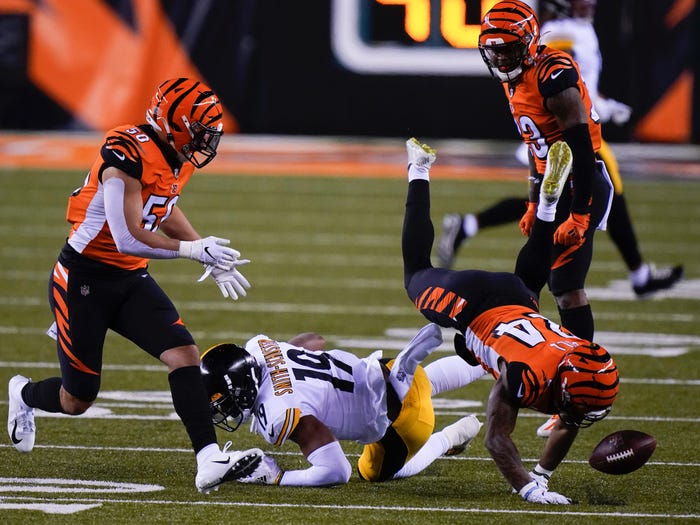 JuJu Smith-Schuster got his s— rocked.

Cincinnati Bengals safety Vonn Bell delivered a massive hit on the Pittsburgh Steelers wide receiver that forced a fumble during the first quarter of their Monday night football matchup. Bell hinted that the bulldozing was meant to punish Smith-Schuster for his social media antics.

Smith-Schuster, a 24-year-old star out of USC, is one of the most active professional athletes on social media, and he's taken over TikTok by posting videos of himself dancing in the locker room, at the gym, and — most notoriously — on his opponents' midfield logos before away games.

Before the Bengals-Steelers matchup this week, Bell called Smith-Schuster "young-minded" to members of the press but said dancing on rivals' logos was "kind of disrespectful at the end of the day."

"But they're on top right now, so you can't really say nothing right now," Bell said, per The Athletic's Jay Morrison. "We just gotta go out there, between the lines, go out there and hit him and let him know where he stands."

Smith-Schuster did not heed Bell's warning, sharing a TikTok of himself dancing atop and spiking a football into the tiger-striped "B" on the 50-yard line at Paul Brown Stadium.

Bell must've seen the clip before kickoff and responded accordingly, absolutely laying him out. The team celebrated on Twitter by referring to Smith-Schuster simply as "Pittsburgh TikTok star" while sharing the replay:

Here's a closer look at the hit and Bell's reaction:

And after the game, Bell confirmed there was a bit more oomph behind that hit because Smith-Schuster was on the receiving end. In his postgame press conference, Bell revealed that he was inspired to ramp it up because "I seen 19," Smith-Schuster's number.

The Bengals went on to upset Pittsburgh 27-17 on the night, extending the Steelers' losing streak to three games and putting Smith-Schuster's squad in serious danger of relinquishing its now-narrow AFC North lead.

Cincinnati remains in last place in the division with a 3-10-1 record. Though they've already been eliminated from playoff contention, Bell and the Bengals will now gear up to play the Houston Texans and Baltimore Ravens to finish out the season.