LOS ANGELES, January 1980 — It is an incredible time for fans of the Los Angeles Rams. Just when people thought the 1980s could not get off to a better start — especially after that mind-blowing Cheap Trick concert at the Forum on New Year’s Eve — the Rams are going to their first Super Bowl.

It is the pinnacle for a proud franchise, the first major league sports team to make a permanent home on the West Coast, way back in 1946. The Rams have not won a championship since 1951, but Super Bowl XIV will surely be the first of many more Super Bowls for the Rams and their loyal fans in Los Angeles.

(Note to the National Football League: Roman numerals might work for movie sequels like last year’s “Rocky II” and this year’s “Smokey and the Bandit II,” but it might be unreasonable for football games. Try to count in Roman all the way to something like Super Bowl 53.)

It was the latest in a lasting connection between the Rams and Hollywood. The Rams had Bob Hope as a part-owner long before the Dodgers (1958) or the Lakers (1960) arrived. In fact, the Rams have been the perfect combination of sports and entertainment since receiver Elroy Hirsch, who was known as Crazylegs, starred in a movie about himself, and Bob Waterfield married Jane Russell.

The Lakers, meanwhile, have an intriguing 20-year-old rookie named Earvin Johnson, though he seems big for a point guard. But they play in a second-tier sports league whose championship games are on tape delay late at night. And what team would ever choose to play its home games in Inglewood?

Aside from the Rams, the team with the brightest long-range prospects might be the Aztecs. Many predict soccer will be the most popular sport in the United States someday soon.

Until then, this is the age of the Rams, just as it always has been. Who can forget Sid Gillman, Jon Arnett and Les Richter on “The Donna Reed Show”? Or Roman Gabriel as a “native” on “Gilligan’s Island”? Or Rosey Grier appearing everywhere from “The Man From U.N.C.L.E.” and “Bewitched” to “Roots” and “The Love Boat,” and telling children that, yes, “It’s All Right to Cry”?

The Fearsome Foursome might be the fastest way to Hollywood. Look what it did for Deacon Jones, who made bookends of the 1970s with appearances on the “The Brady Bunch” (1971) and “Wonder Woman” (1978). Even now, Merlin Olsen stars on “Little House on the Prairie,” just as he did while he was playing. Casting directors might keep an eye on Fred Dryer.

It is not just that Hollywood loves the Rams; the Rams love star power, too. Last season, they signed Joe Namath, often remembered for his role on “The Brady Bunch.” The Rams got rid of the strong-kneed quarterbacks James Harris and Ron Jaworski, and Namath retired from football, but it worked out because now the Rams have Pat Haden and Vince Ferragamo. 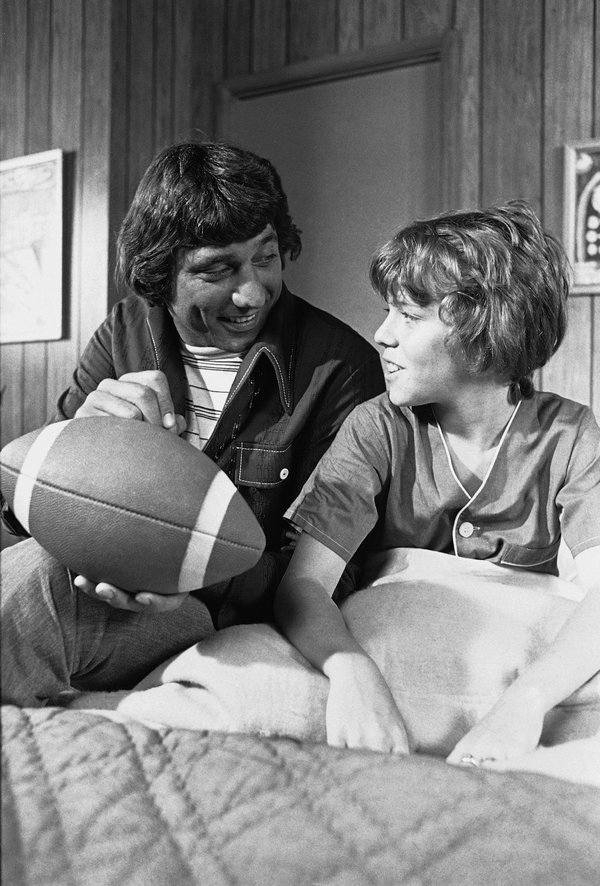 The only better combination at quarterback would be Tom Jarrett and the ghost of Joe Pendleton in “Heaven Can Wait,” nominated for 13 Academy Awards last year.

That movie was about a quarterback for the Rams who died and then came back in the body of the team’s other quarterback, who also died, and yet the movie still somehow predicted this week’s Super Bowl matchup with the Pittsburgh Steelers.

It would be even more amazing if Warren Beatty wore No. 15 in the movie, like Ferragamo. Maybe someday the Los Angeles Rams will have a No. 16 at quarterback who leads them to the Super Bowl. His name probably won’t be Jarrett, but maybe something like it. Only in Los Angeles.

The Rams themselves are like a movie script. The team’s owner, Carroll Rosenbloom, drowned under mysterious circumstances in Florida last off-season. Jonathan Winters, maybe the most famous of all the Rams fans, told jokes at the memorial service attended by Beatty, Jimmy Stewart, Diane Keaton and hundreds more.

Most thought Steve Rosenbloom, a longtime team executive under his father’s tutelage, would take over the team, but Carroll Rosenbloom left ownership to his widow, Georgia — 20 years younger than her husband and married five times before. She was the first female N.F.L. owner, and promptly fired her stepson.

She has been quite the conversation piece this week before Super Bowl XIV.

“She is the platinum blond star/heroine/villainess of a Hollywood real-life drama that is two touchdowns better than ‘Days of Our Lives’ on that soap’s most gold digging, betraying, bizarrely gauche day of its life,” is how the Washington Post sportswriter Dave Kindred put it.

Los Angeles fans just hope she steers the franchise the way her late husband did. The Rams are moving 35 miles down the freeway to Anaheim for the 1980 season (something about additional revenues from luxury boxes), but they still will be the Los Angeles Rams. Yes, she will soon marry for the seventh time, but her commitment to keeping the franchise in Southern California appears solid.

Where else would they go? The Rams are one of those N.F.L. franchises perfectly matched to its location, like the Raiders in Oakland, the Browns in Cleveland and the Colts in Baltimore.

Carroll Rosenbloom, actually, was the majority owner of the Baltimore Colts, all the way back to 1953. They won a bunch of championships, but he didn’t think the city appreciated them enough after winning Super Bowl V. So in 1972, he traded the Colts for the Rams, straight up, with Robert Irsay. Everyone won.

Rosenbloom knew what he was doing. He hired Coach Chuck Knox in 1973, and the Rams have captured the division every year since. But they never had an offense as good as their defense, and they kept getting beat in the playoffs, so Rosenbloom brought in the former Rams coach George Allen in 1978 to toughen them up.

Players complained, and Rosenbloom fired Allen after two preseason games, in a delicious Hollywood twist. That is how Malavasi, the offensive coordinator, got to be coach. Otherwise, George Allen would have been on “Fantasy Island.”

The Rams were just 9-7 this season, and people were surprised when they finally beat the Cowboys in the playoffs. But now that they are playing in the Super Bowl (oddsmakers have them as the underdog), it is easy to imagine them being stout for a long time under Malavasi.

One thing on their side: They have little competition in their division. Which team looks like it might be better than the Rams through the 1980s? The Falcons? The Saints? The hopeless 49ers were 2-14 this season under their first-year coach, Bill Walsh. They drafted a quarterback named Joe Montana, and he barely played.

So starting with this weekend’s Super Bowl, the 1980s are perfectly lined up to be the Rams’ decade, just like the 1970s were, or almost were, if only the Rams actually won a championship.

That might start on Sunday, with Super Bowl XIV at the Rose Bowl. It promises to be a good show. The Embraceable Ewes, the cheerleading squad so popular that it has been featured on “The Merv Griffin Show,” will be on the sideline.

One Embraceable Ewe, Jenilee Harrison, has been on “CHiPs” and looks enough like Suzanne Somers that maybe she’ll join the cast of “Three’s Company” someday. Another is Cheryl Ladd’s stunt double on “Charlie’s Angels.”

Ladd, incidentally, is singing the national anthem before the Super Bowl. And the halftime performance, as usual, should not be missed. The N.F.L. keeps one-upping itself. This year it features Up With People.

On Jan. 20, 1980, the Los Angeles Rams lost Super Bowl XIV to the Pittsburgh Steelers, 31-19. Ray Malavasi coached three more seasons (the Rams were 19-22) and died in 1987 of a heart attack in a California courthouse. Vince Ferragamo played in the N.F.L. until 1986 and won one more playoff game. Jenilee Harrison, the former Rams cheerleader, did join the cast of “Three’s Company” after Suzanne Somers departed.

In Anaheim, behind running back Eric Dickerson and a string of forgettable quarterbacks, the Rams had some good seasons but could not keep up with the Walsh-Montana 49ers. The Rams returned to their habit of losing playoff games and fell into relative obscurity in Southern California.

In hindsight, the end of days should have been recognized with this team video from the era, “Ram It.”

The use of Roman numerals to mark Super Bowls persists.

Frontiere died in 2008. Stan Kroenke, a minority owner of the team, bought a majority stake from the Rosenbloom family and moved the Rams back to Los Angeles in 2016.

Rams crowds at the Los Angeles Coliseum averaged 72,429, 10th in the N.F.L. and about three-quarters of the stadium’s capacity. The Rams are building a stadium on the site of Hollywood Park in Inglewood. It is scheduled for completion in 2020.

Rams quarterback Jared Goff wears No. 16, just like the winning quarterback, Tom Jarrett, in “Heaven Can Wait.” In real life, he looks more like Ryan Gosling than Warren Beatty.

John Branch is a sports reporter. He won the 2013 Pulitzer Prize for feature writing for “Snow Fall,” a story about a deadly avalanche in Washington State, and was also a finalist for the prize in 2012. @JohnBranchNYT