Ben Hunt describes it as “a pretty big error.”

It was the momenthe gave Adam Reynolds a chance to kick South Sydney to victory, one the opposing halfback accepted. With the scored tied and just a minute left on the clock, Hunt got the football on the last tackle. Had he put boot to ball, the opposition would have been pinned in their own territory, giving St George Illawarra the chance to win the game in extra time.

Instead he put the ball through the hands, a decision that resulted in a turnover and, ultimately, a match-winning Reynolds field goal. 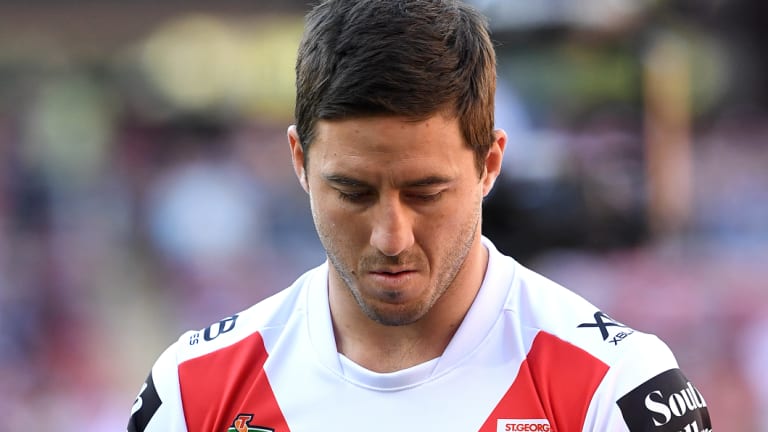 Spotlight: Dragons halfback Ben Hunt sought help for the torrent of criticism he has endured.

“It was a pretty big error by me, to be honest,” Hunt admitted.

“I thought we had a few numbers on the edge and I was just trying to shift the ball.

“I should have maybe just gone with the percentage play and kicked on the last, put them down their end. It was a bit of an error on my behalf.

“It was very disappointing. Those little things in a game really change the outcome. That gave them field position and credit to Reynolds, he’s a great player.

“He kicked three field goals in a row, that’s what hurt us.”

The pivotal play resulted in Souths progressing to the grand final qualifier in a blockbuster clash with arch rivals the Roosters. The Dragons are left to lament what might have been, although coach Paul McGregor said he was proud of the performance his injury-ravaged side produced.

It ends what Hunt described as a “rollercoaster” season, one in which he has had to endure relentless criticism. To his credit, he has fronted up to the media during the good times and the bad and spoken with a rare candour about the pressure of constantly being in the spotlight.

“There has been some good times and there’s been some hard times,” Hunt said.

“There’s been some lessons learned. Overall, I’ve been quite pleased with the year and I’m happy with it at the moment.

The Red V will also take some valuable lessons out of the season. The side was flying going into the State of Origin period but the interstate series undoubtedly took a toll on their stars. Forward Jack De Belin conceded he was mentally and physically spent after his first Origin series, with the joint-venture outfit experiencing a slump after opting not to give its representative stars a break.

“It was very weird at the back end of the year. I just felt so flat,” De Belin said.

“Hopefully next year we have even more boys in Origin and we will be better for it.”

While McGregor gave his Origin contingent the option of taking a break, the players refused. However, the club may opt to take the decision out of the players’ hands given De Belin’s candid reflections.

“I want to back up for the club, I don’t want to be that guy who doesn’t back up for his club because I love playing for the Dragons. These are my brothers,” he said.

“You never know [if it could have been handled better]. Even more just getting away from footy, switching off a bit. It’s pretty hard when it’s footy, footy, footy.

“It’s kind of dominating your life. Personally if I am backing up I just need to get away from footy. When I turn do turn up I have to perform.”