Before tip-off ahead of his team's match against the Memphis Grizzles, San Antonio Spurs coach Gregg Popovich was asked about the availability of injured guard Marco Belinelli.

It was a standard question that Popovich would answer eventually (he didn't play in the 108-106 win, as it turns out). First, he had something to get off his chest. 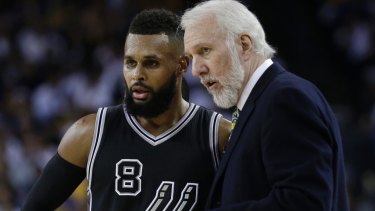 "Our number one priority as far as the country and society is concerned is racial justice, actually racial injustice, that exists in our country and trying to make everything just for all people,” Popovich said. "Just as a reminder, in this world a lot of people really do not understand the breadth and depth of this horrific situation that black people have been in for so long."

It was a statement that didn't raise many eyebrows, given Popovich's longstanding outspoken advocacy for social justice causes. What did come as a surprise happened a few days earlier, when he elected to stand during the national anthem while his team kneeled to show their support for the Black Lives Matters movement.

When asked for his reasons, Popovich said he would prefer to keep that to himself. Given his track record of activism, nobody could accuse him of not having being on the right side of history when it came to race relations in America.

That was precisely how his players interpreted things. DeMar DeRozan was among those who defended Popovich's (along with his assistant Becky Hammon) right not to take a knee, just as Popovich had insisted on the players' right to do precisely that.

"You know Pop speaks out. When it comes to Becky, she's been [on the] front line, fighting for equality since I've been a fan of hers playing in the WNBA," DeRozan said. "So everybody has their own right of making a statement and you can't vilify nobody for not doing what the other group is doing. I'm all for it."

All of which brings us around to Israel Folau, who declined to take a knee when his Catalans Dragons side prepared to take on St Helens in the Super League clash at Headingley. It's fair to say his public record of tolerance hardly compares to a progressive darling like Popovich and the criticism was immediate and predictable.

It was also misplaced, although he has made himself an easy target with his damaging homophobic social media posts, for which he was rightly sacked by Rugby Australia for breaches of the player code before being signed by the French league outfit.

It would probably help if he explained his reasoning but he shouldn't feel compelled to do that, either. Like Popovich said, these sorts of matters can be deeply personal and not everything needs to be laid out on the table, although Folau should have probably followed that advice the first time around.

"As a group of players and coaching staff, we spoke about it in depth and as a club we are completely against racism and all for equal opportunity," coach Steve McNamara said afterwards.

"But there were some players and staff who made the decision not to take the knee. That was based on personal choice, they have their own reasons for doing that, and we decided we would respect anyone's personal choice on the matter."

Can we assume that Folau doesn't support racial equality because he didn't take a knee? Obviously not. As a Polynesian, he's no doubt dealt with his fair share of barbs and insulting stereotyping on and off the field.

More likely, his reasoning once again comes back to his religion. In case you weren't keeping track of his Instagram posts, Folau is a devout conservative Christian whose moral compass gets steered by the Good Book. 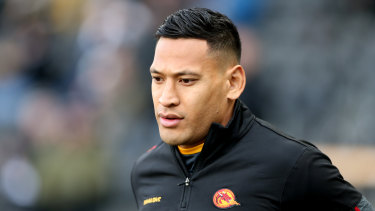 So to is the Orlando Magic's Jonathan Isaac, a black player who stood while the rest of his team took a knee in the NBA over the weekend. He did explain his reasons afterwards, saying he believed the gospel was the answer to America's problems

"Absolutely. I believe that Black Lives Matter. A lot went into my decision. And part of it is, first off, is my thought that kneeling or wearing a Black Lives Matter t-shirt don’t go hand in hand with supporting Black lives.

"So I felt like, just me personally, what it is that I believe is standing on the stance that: I do believe that Black Lives Matter, but I just felt like it was a decision that I had to make and I didn’t feel like putting that shirt on and kneeling went hand in hand in supporting Black lives, or that it made me support Black lives or not."

What Isaac was saying is that you don't have to wear the jersey to support the team. If Folau feels like kneeling is reserved for his deity of choice, so be it. He doesn't deserved to be publicly shamed for his decisions.

At the heart of it all lies the principle for which former San Francisco 49ers quarterback Colin Kaepernick fought so hard and paid such a hefty price. In winning the right to protest, he also won the right for athletes to elect not to do the same.

It's a delicate issue and one that has the International Olympic Committee wary of allowing its athletes carte blanche when it comes to acts of political protest at the Games in general and podium in particular.

There stands a chance that those who take a knee or raise a hand would be lauded as heroes, while those who prefer to support their causes in more circumspect fashion may be cast as villains. That is a deep injustice in itself.