Captain Tim Paine has declared Steve Smith and David Warner will play integral roles in Australia's defence of the urn, but the race for Ashes berths remains wide open after the thumping win over Sri Lanka.

The Canberra Test, which Australia won by 366 runs to complete a 2-0 series win, is the last that falls within Smith and Warner's one-year suspension, which expires March 29. 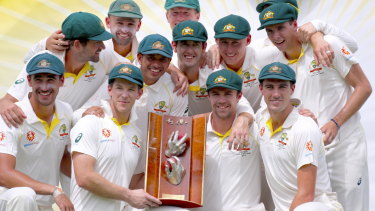 Long wait: Australia’s captain Tim Paine holds the trophy as he poses with teammates after they finally broke through for a series victory.Credit:AAP

The pair are recovering from elbow surgery but are poised for a return to the baggy green for the first Test at Edgbaston. Their reintegration into the side is not complete but Paine and coach Justin Langer want the star duo back in the fold.

"I think everyone has to a degree got to earn their stripes. I think those to have plenty of runs in the bank," Paine said. "I see us going to the Ashes and them having a huge part in us winning the series. That's how I see how important they are to this team.

"We know how good they are. Hopefully once their bans are up they'll be welcomed back and they'll win Test matches like they did beforehand."

It has taken until the end of the home Test summer and demoralising defeats to Pakistan and India but Australia are now seeing some of the gains from the on-field pain caused by the ball tampering scandal.

Amid one of the most turbulent periods in Australian cricket, Paine's men have in some respects exceeded the albeit modest expectations for a side that was rocked by the loss of its two superstar batsmen.

The 1-0 loss in the UAE was an improvement on the whitewash of 2014 while they were competitive for long periods against India before tailing off in Melbourne and Sydney when their inability to hit big scores was exposed on flat tracks.

Paine believes Australia are starting to build depth in their batting ranks to the point. He believes there are 16-20 players in the running for a ticket to England. Confidence has risen in the past two weeks after four centuries, including maiden tons to Travis Head and Kurtis Patterson.

Sri Lanka's lack of quality, however, will be a factor in how selectors assess that form with competition for places now strong.

One of the incumbents appears likely to miss out, possibly two if selectors name an all-rounder in Marcus Stoinis, and challenges will come from discards Shaun Marsh, Mitchell Marsh and Peter Handscomb.

"I haven't written any down, but I've got a fair idea what it might look like," Paine said of Australia's Ashes touring party. "But I'm not a selector, so I get asked my input but I think they would have a pretty good picture of what it would look like.

"What we've seen over this summer is that we've now started to build a squad with plenty of depth.

"So there's probably anywhere between 16 and 20 players now that we think are in the mix, which is a really good place to be."

Paine revealed he has been thinking about the Ashes for "six months".

"I've been dreaming about it actually. I'm happy now that we've got this out of the way I can put everything into it because every Australian cricketer can’t wait to go and play an Ashes series and particularly in england," Paine said.

"It's something that I've certainly dreamed of as a kid, I didn't think I'd be going over as the captain, but in the back of my mind I’ve been thinking about it. 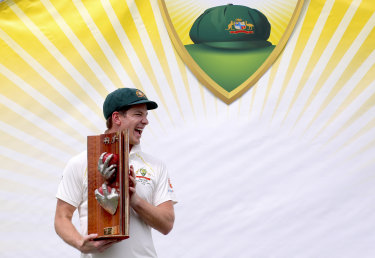 Finally: After months of torment, Tim Paine was able to pick up a trophy after a series win as captain.Credit:AAP

"I’ve been watching England, keeping a really close eye on them, I can’t wait to get over there."

Australia wrapped up victory in the second session of day four after skittling Sri Lanka for 149. Mitchell Starc sealed player of the match honours with 5/46 for a match haul of 10 wickets though Joe Burns and Travis Head can consider themselves unlucky after setting the game up with big hundreds in the first innings.