NAPLES, Fla. — Minjee Lee, the No. 2 money winner in the L.P.G.A. this season, follows men’s golf pretty closely because her younger brother, Min Woo, is a top amateur making his way into the pros. So, of course, Lee said recently, she would be interested in watching Tiger Woods and Phil Mickelson in their $9 million, winner-take-all exhibition on Friday.

“I think it’s going to be a great match,” she said.

Then someone mentioned $19.99, the cost for golf’s first foray into pay-per-view.

“I didn’t know that,” Lee said with a thin laugh. “Maybe I’ll just follow it on Twitter or something.”

In an HBO special last week that played like a 45-minute infomercial for the match, Woods said one of his objectives was “getting the next generation interested in the game.” He and Mickelson have hit that theme hard: Their showdown can expand the sport.

“This is a fantastic way to do it,” Woods said on HBO. 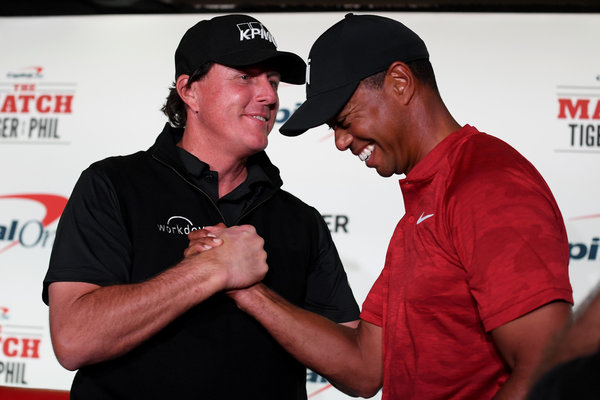 But by themselves, this pair of 40-somethings, who have a combined 19 major titles, can sell only nostalgia, if that. Their audience has already been hooked, riveted for years to the two biggest names in the game.

If Woods and Mickelson were serious about using Turner Sports’s multiple platforms to extend golf’s reach, they could have joined with L.P.G.A. players in a team event. The women’s and men’s tours have come together before in a prime-time exhibition. In 2001, under the lights outside Palm Springs, Woods and Annika Sorenstam defeated David Duval and Karrie Webb in 19 holes in an alternate-shot match.

The players wore microphones, but the exchanges were drier than the desert air.

That wouldn’t be the case today. The L.P.G.A.’s current players possess both the game and the gregariousness to sell themselves to a wider audience. All they’re missing is a stage big enough to accommodate their personalities.

Take Shanshan Feng, a former world No. 1 and the first player from China to join the L.P.G.A. Tour. You never know what she will say next. Her stories are almost as colorful as her outfits. She might talk about the popularity of her cow-pattern pants or about making an indelible first impression on China’s president, Xi Jinping, during a formal meet-and-greet for Olympians by telling him that he was handsome.

It conjures a smile just imagining Feng, 29, known to her friends as Jenny Money, and her cow pants teaming with Mickelson and his green alligator shoes. Whatever the outcome of the match, high-definition TV would be the winner. Feng, a 2016 Olympic bronze medalist, also has the potential to make a vast Chinese audience care about the outcome.

Unlike in tour events, Mickelson and Woods will wear microphones during the exhibition so viewers can hear them talking smack. If the HBO special was any indication, viewers should not expect Woods, whose resting state is guarded, to play Mickelson’s straight man in an on-course comedy routine. If it’s spirited banter the viewers want, there’s always Ernie Johnson and Charles Barkley in the broadcast booth.

Neither Mickelson nor Woods will be the most entertaining major winner in Las Vegas this week. That distinction belongs, hands down, to Danielle Kang, who lives in the city. In an interview this year with Golf World, Kang mentioned wanting to buy a tarantula. She grudgingly decided against it after none of her friends would agree to care for the pet while she was on the road.

Kang, 26, is a self-described drama queen and the L.P.G.A. player most likely to break out into a rap or call out an amateur partner for chunking a shot in a pro-am — and then spend the rest of the round offering instruction. Before her opening shot in her first Solheim Cup, Kang implored the fans to get louder, a crowd-pleasing gesture that won’t be an option for Mickelson or Woods — no spectators will be allowed on the course during their match.

The $9 million pot for Woods and Mickelson, who both ranked in the top 25 on the 2018 Forbes list of the world’s wealthiest athletes, is hard to fathom for people on the L.P.G.A. Tour, where the largest purse for a tournament this season was $5 million for the United States Women’s Open. (The men’s tour topped out at $12 million for its U.S. Open.)

From a strictly financial perspective, Woods and Mickelson could reject the idea of sharing a huge check with partners whose skills have less market value. But remember, they’re the ones talking about building the sport. And the women’s game is the next frontier. A report commissioned this year by the R&A, one of golf’s two governing bodies, found that there was ample opportunity to increase participation in the game — by luring more women and families.

They’re making slow but steady progress. Ahead of last week’s season finale at Tiburon Golf Club, Terry Duffy, the chairman and chief executive of the CME Group, the tournament’s title sponsor, announced that next year the purse would double, to $5 million, with a record $1.5 million for the winner (about $600,000 higher than at this year’s U.S. Women’s Open).

Though Duffy, an avid golfer with a single-digit handicap, is willing to raise the ante for the women’s game, he professed little interest in the high-stakes match between Mickelson and Woods.

“I would not pay to watch that,” Duffy said. “That kind of money should have a lot of beneficiaries.”

Brittany Lincicome, a two-time major winner who made a PGA Tour start in July, is always looking for a way to bring more people into the game. At the L.P.G.A. season finale in Naples, Fla., she invited Reilly Kirwin, an 8-year-old from nearby Bonita Springs, to join her inside the ropes for a nine-hole pro-am.

She let Reilly, a budding golfer, hit a putt and chip, and entertained all of her questions. Two days later, Lincicome opened with a 64, and then told reporters that the time she spent with Reilly had inspired her to adopt a carefree kid’s mind-set.

Mickelson and Woods will get pay-per-view in golf off the ground, but they missed the mark. Maybe the next such exhibition will expand more than one man’s bank account.