THE final round of the group phase is upon us – and the giant Group B clash as England face Wales.

The Three Lions are all but through to the knockout phase and the only way Gareth Southgate’s side will bow now out is if they lose heavily to Wales. 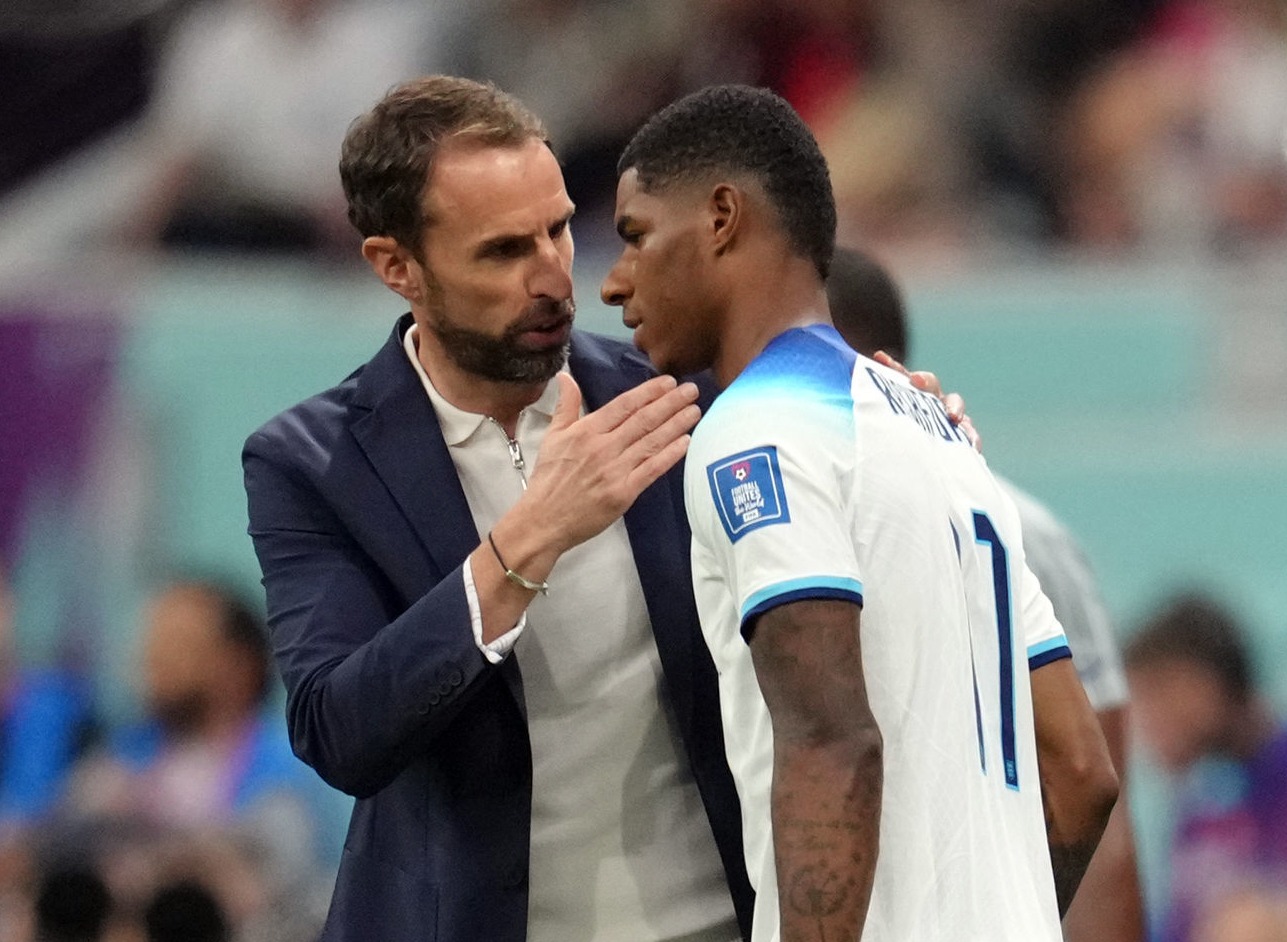 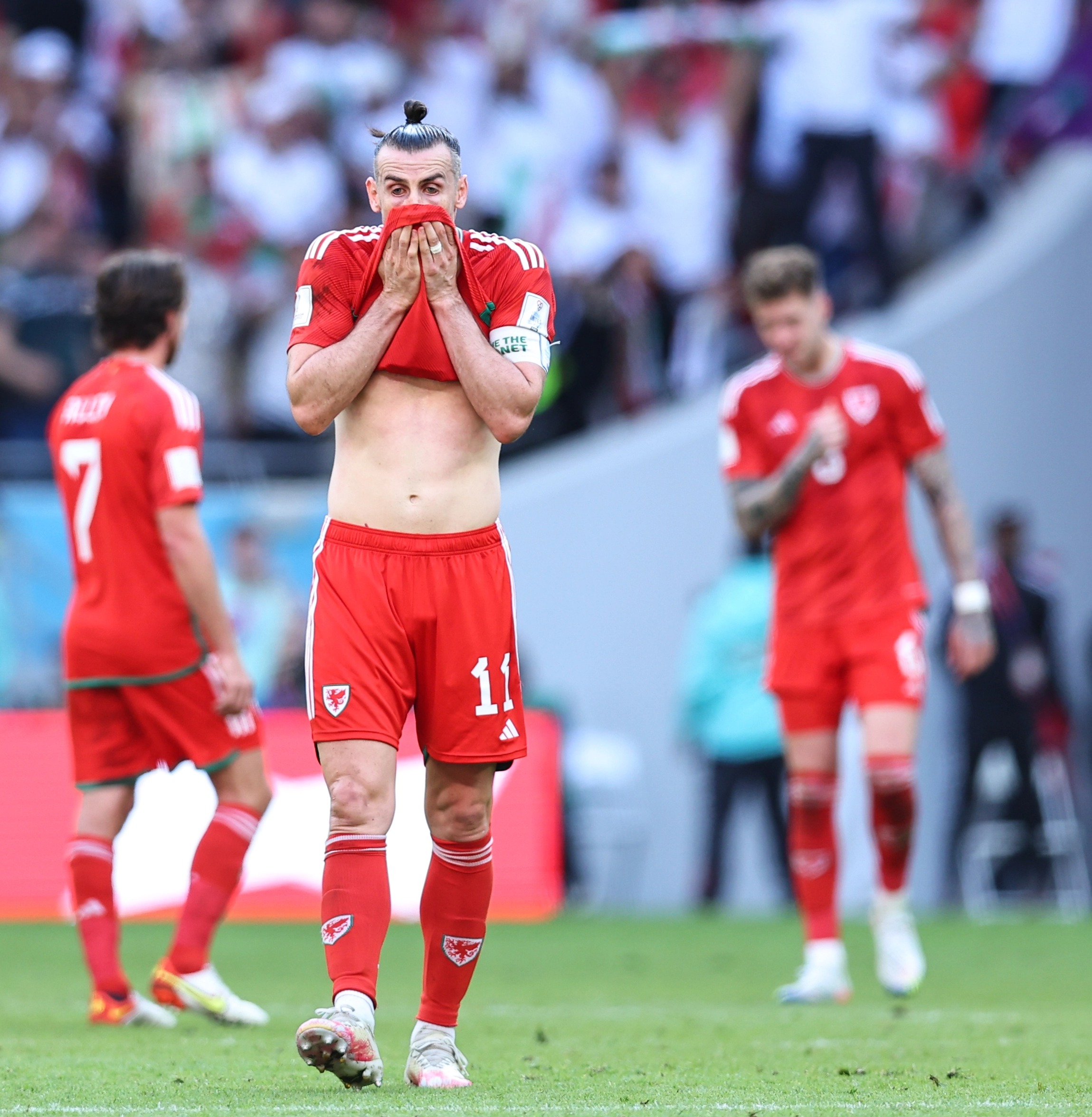 England’s opponents in this game are sitting rock bottom of the group, having picked up one point from their first two matches.

In Wales’ previous outing against Iran, the team were defeated 2-0 and looked hopeless at times.

If Rob Page’s men don’t pick up all three points, they will be on the plane home from Qatar.

The supporters of each nation in this clash will have one eye also on the match between Iran and the USA which could sway momentum on the field of play for the two British sides. 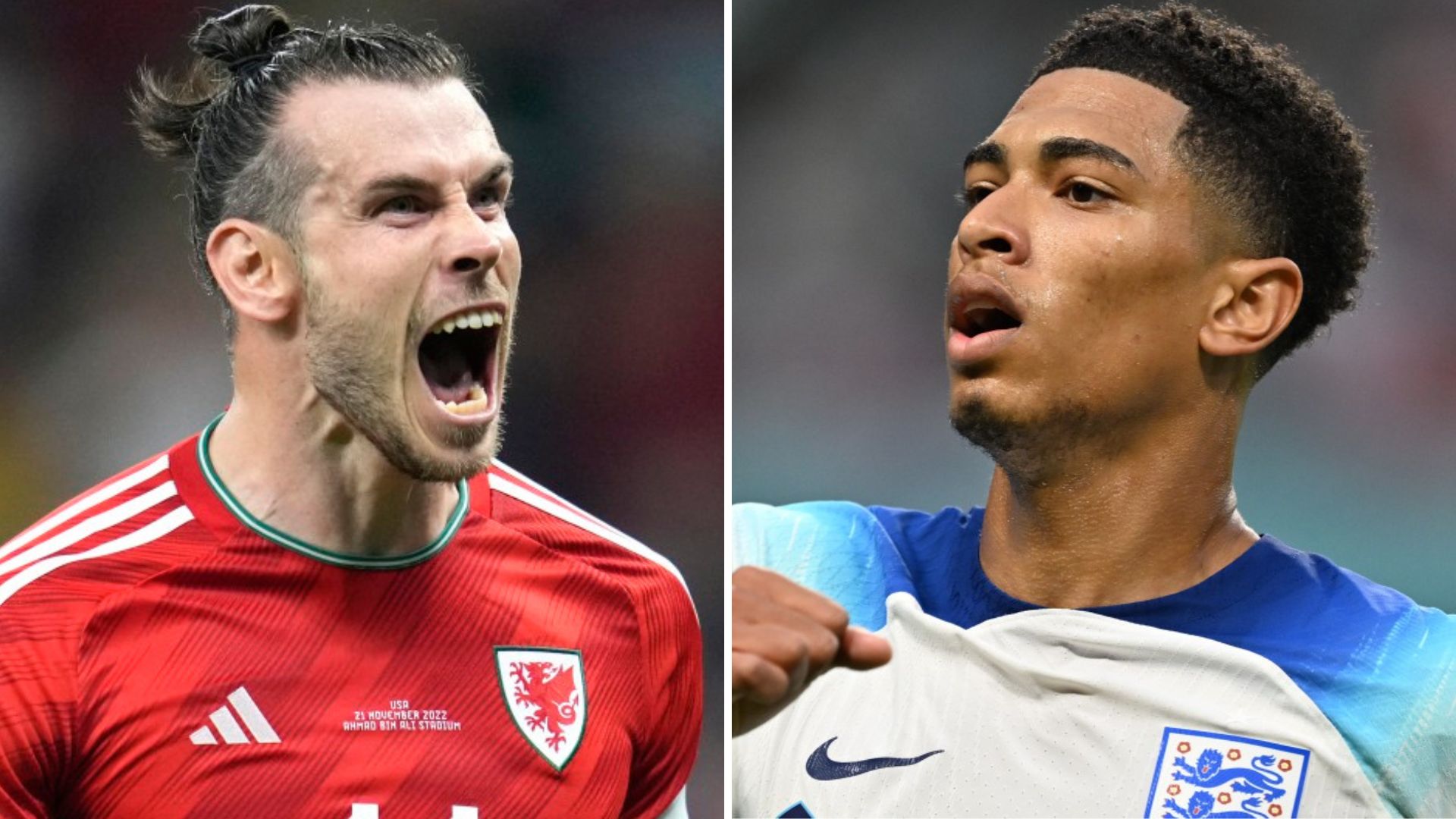 England's goalless draw with the USA will give Wales hope however of pulling off a major shock.

Here are three key tactical areas where the game can be won and lost.

Wales dominated the ball against Iran on Friday, but this played perfectly into the hands of the Middle Eastern side.

Manager Carlos Queiroz was unbothered by his team’s lack of possession and was more than happy for his players to sit back in a deep defensive block and deny goalscoring opportunities for Wales.

There are two ways of controlling games in football. Teams either look to control the ball or control the space. Iran fall into the latter category.

Nonetheless, the objective from Queiroz was not to merely keep a clean sheet.

They aimed to hit Wales with balls in behind the backline.

Switching from a 5-4-1, as used in the 6-2 battering taken by Iran against England, for a 4-4-2 versus Wales was a wise decision from the former Manchester United assistant manager.

Essentially, bringing Sardar Azmoun back into the side after his long injury absence and deploying him alongside Porto star Mehdi Taremi killed Wales’ defensive line.

When Iran would turn over the ball in their deep block, the first instinct from the players in transition was to play the ball as quickly as possible to the front two who would be darting into the channels. 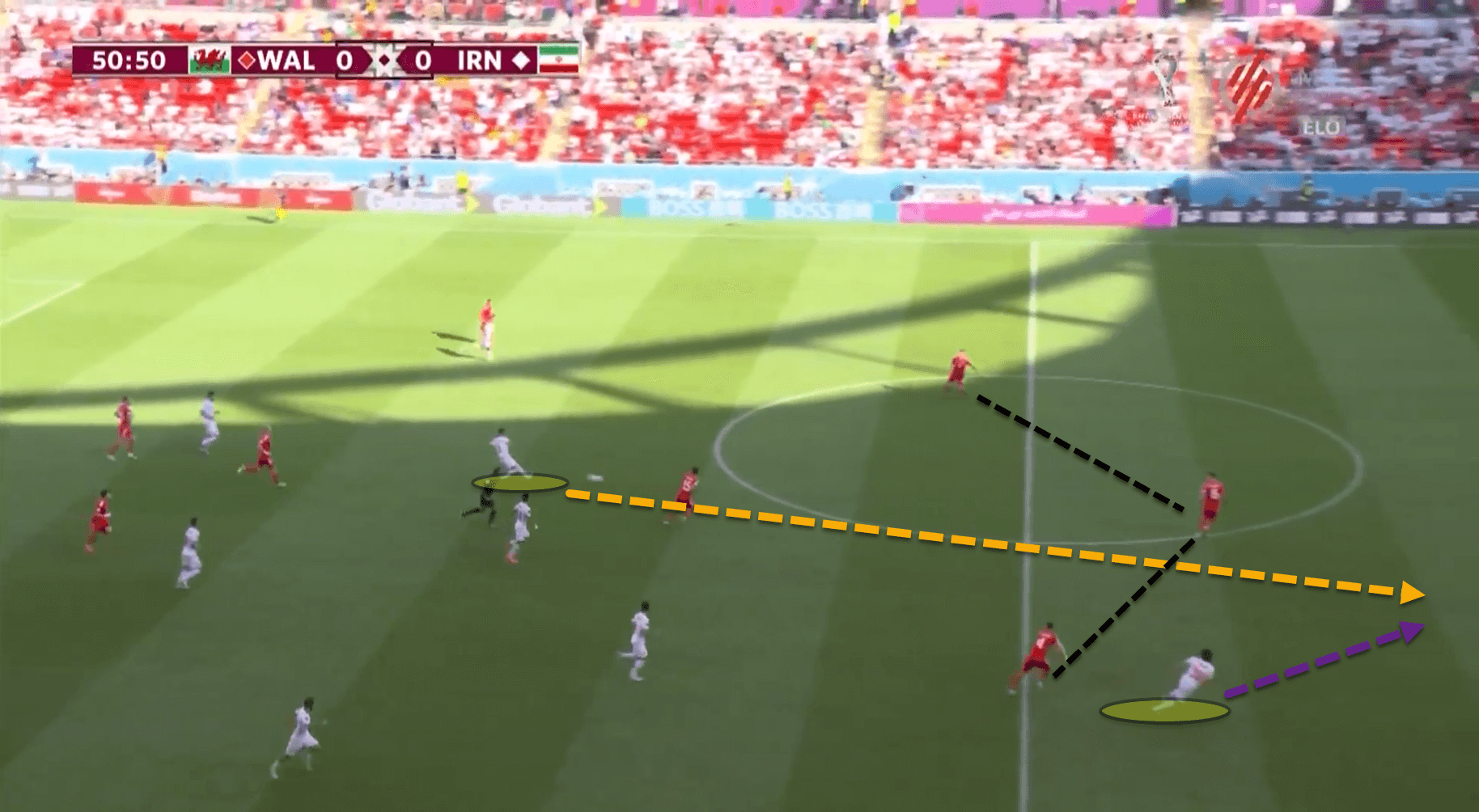 The three centre-backs couldn’t cope with these constant runs as well as the pace and movement of Iran’s two centre-forwards.

England can certainly look to take advantage of the space behind Wales’ back three when the Dragons are positioned high up the pitch.

Against the USA on Friday, Southgate’s men struggled during counterattacking moments to form cohesive attacks.

This is an area where the manager will be hoping his players can improve ahead of Tuesday’s all-British clash in order to cause significant damage to Wales in transition.

One player that could be important for England during these situations is Marcus Rashford. 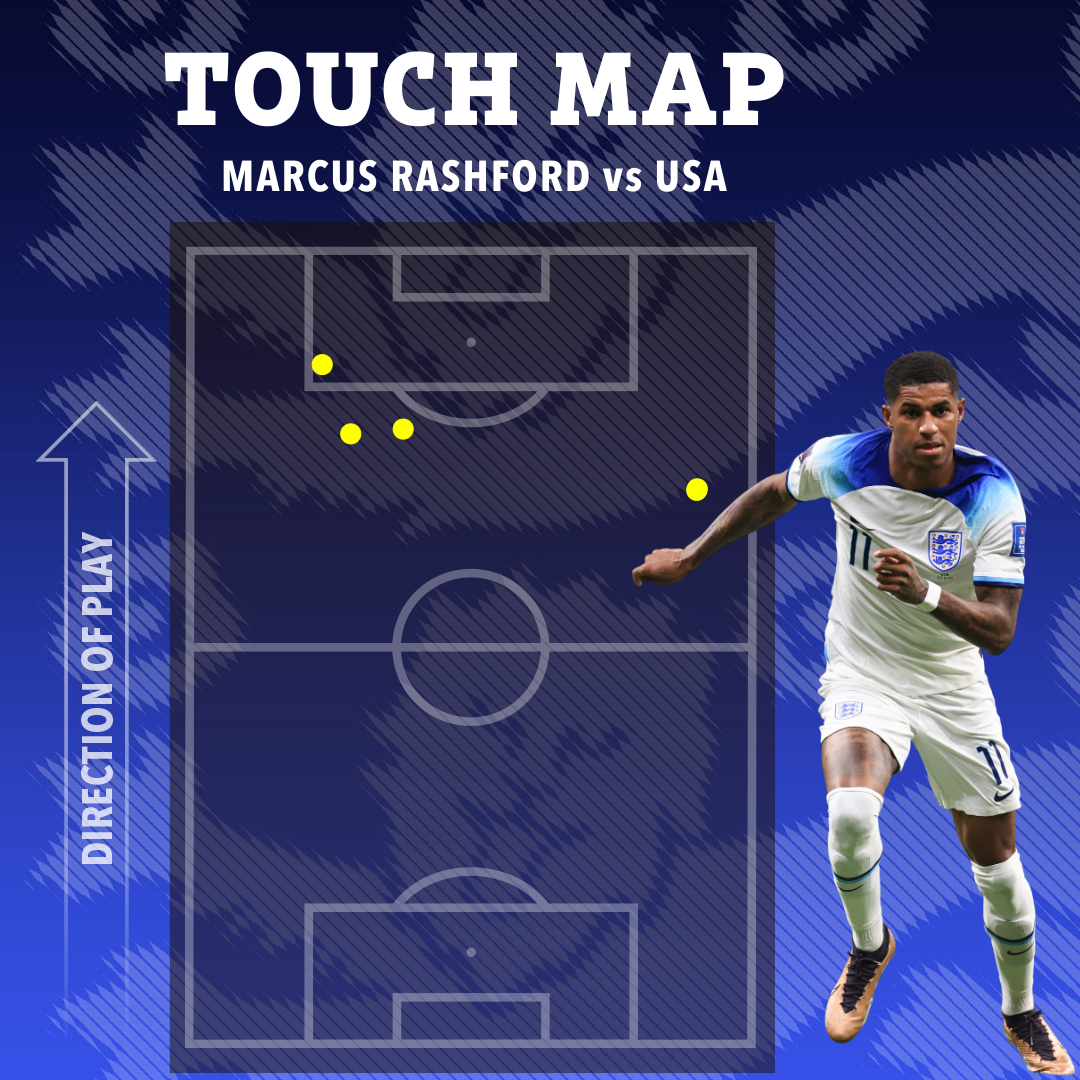 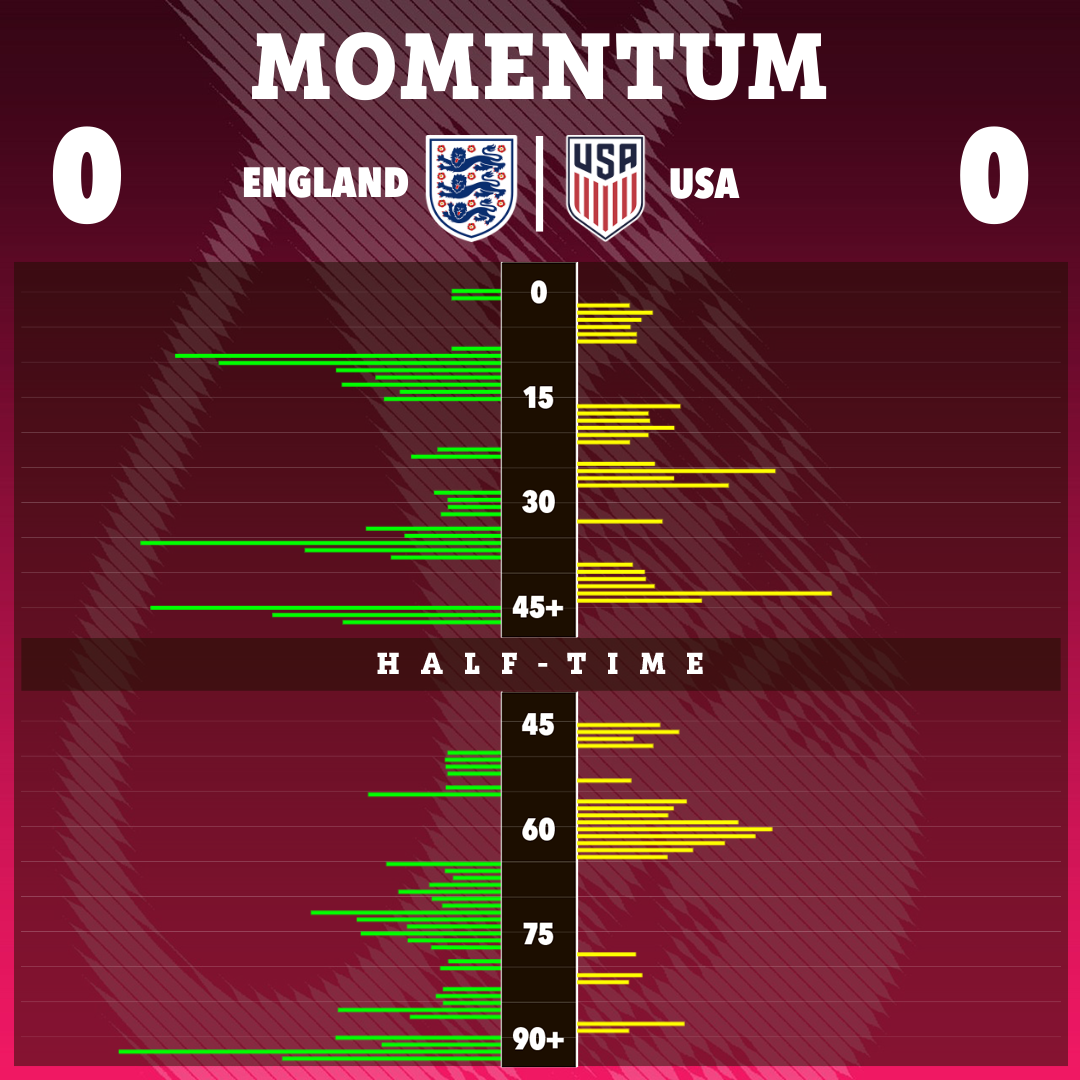 The Manchester United man came off the bench in the last two matches at the World Cup, scoring in the opening fixture against Iran.

Rashford is better at making threatening runs in behind than any other player in the Three Lions squad and it’s one of his greatest attacking attributes which has terrified many defences in the Premier League over the years.

For the past two games, Southgate has used Bukayo Saka and Raheem Sterling on the flanks but bringing Rashford in to make those channel runs between Wales’ centre-backs which caused them so many issues against Iran could be an excellent personnel tweak from the former Middlesbrough boss.

The other option if Rashford does not replace Saka – or maybe Sterling – in the starting XI would be to bring him off the bench as an impact sub around the hour mark. 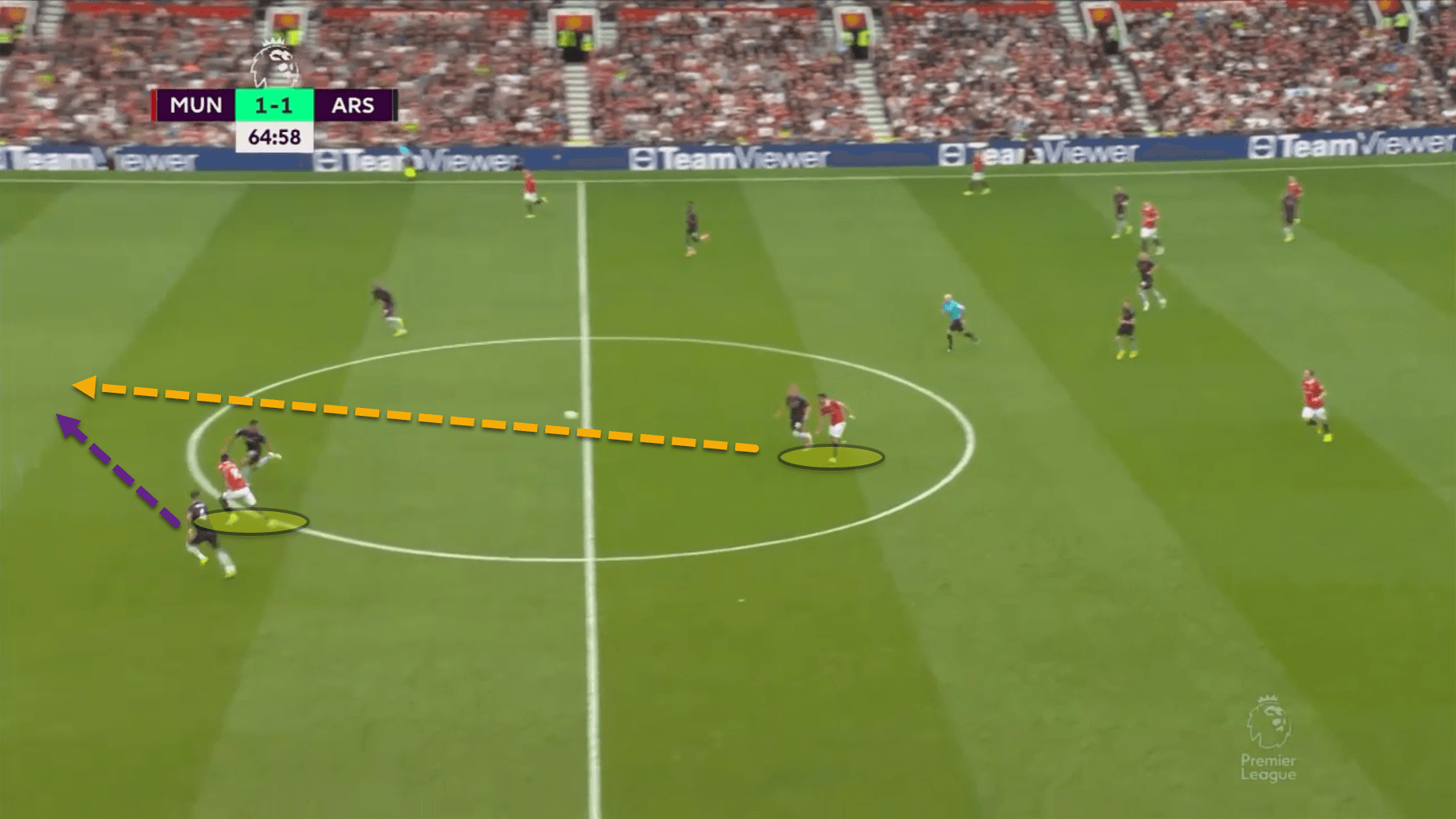 Taking a page out of the USA’s book

The USA showed the blueprint for how to play against England on Friday night.

One of the core strengths of Southgate’s side is that they excel when given room to play split passes through the opposition’s midfield and into the feet of their attacking players.

Gregg Berhalter made his side extremely tough to break down for England by setting up a well-drilled 4-4-2 defensive block out of possession.

The objective of the USA’s defensive tactics was to force the English backline to play to the wide areas, keeping them away from the central areas.

They did this by cutting off access to space between the lines, maintaining a very compact shape and blocking passing lanes to the England players that were situated inside the 4-4-2 block.

Once England did play to the flanks, the USA would press aggressively to win the ball back.

This was helped by the touchline which limited the space England had to play into, practically giving the Americans an extra defender. 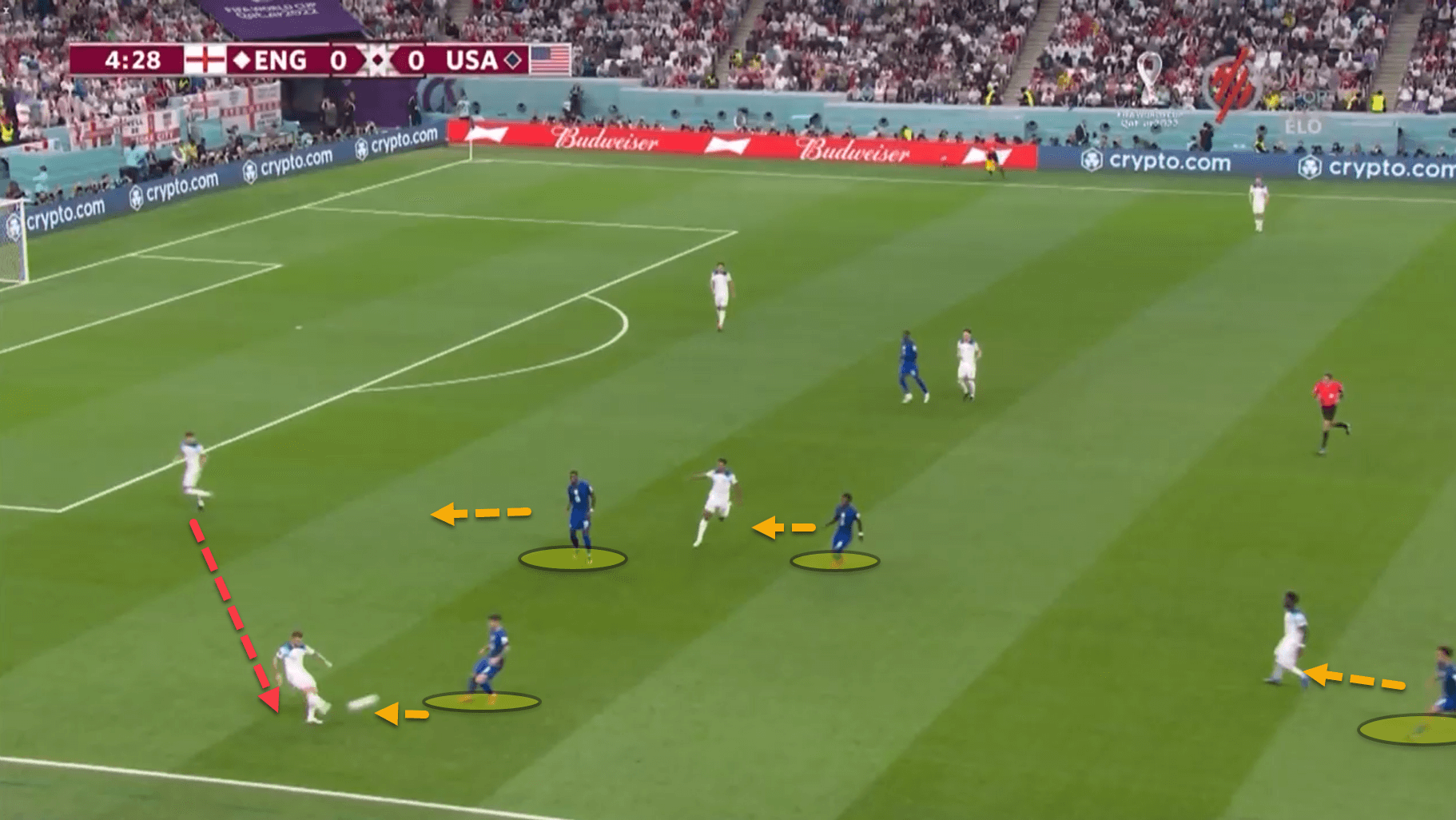 Against England, one thing that the Americans did really well was to prevent Declan Rice from receiving the ball in front of the backline.

In the USA’s 4-4-2 shape, the two centre-forwards would always ensure that the passing lanes between the centre-backs and Rice were blocked, meaning the West Ham United midfielder couldn’t act as the link man between the defenders and the attackers.

If Wales are to stifle England’s attacking prowess and ability to reach their offensive players between the lines, Rob Page will need to rip a page out of the USA’s book of defensive tactics.

So far at this World Cup, Page has lined his players out in a 5-3-2. The aim from the Welsh players has been quite similar to Berhalter’s side but the execution has been far from ideal. 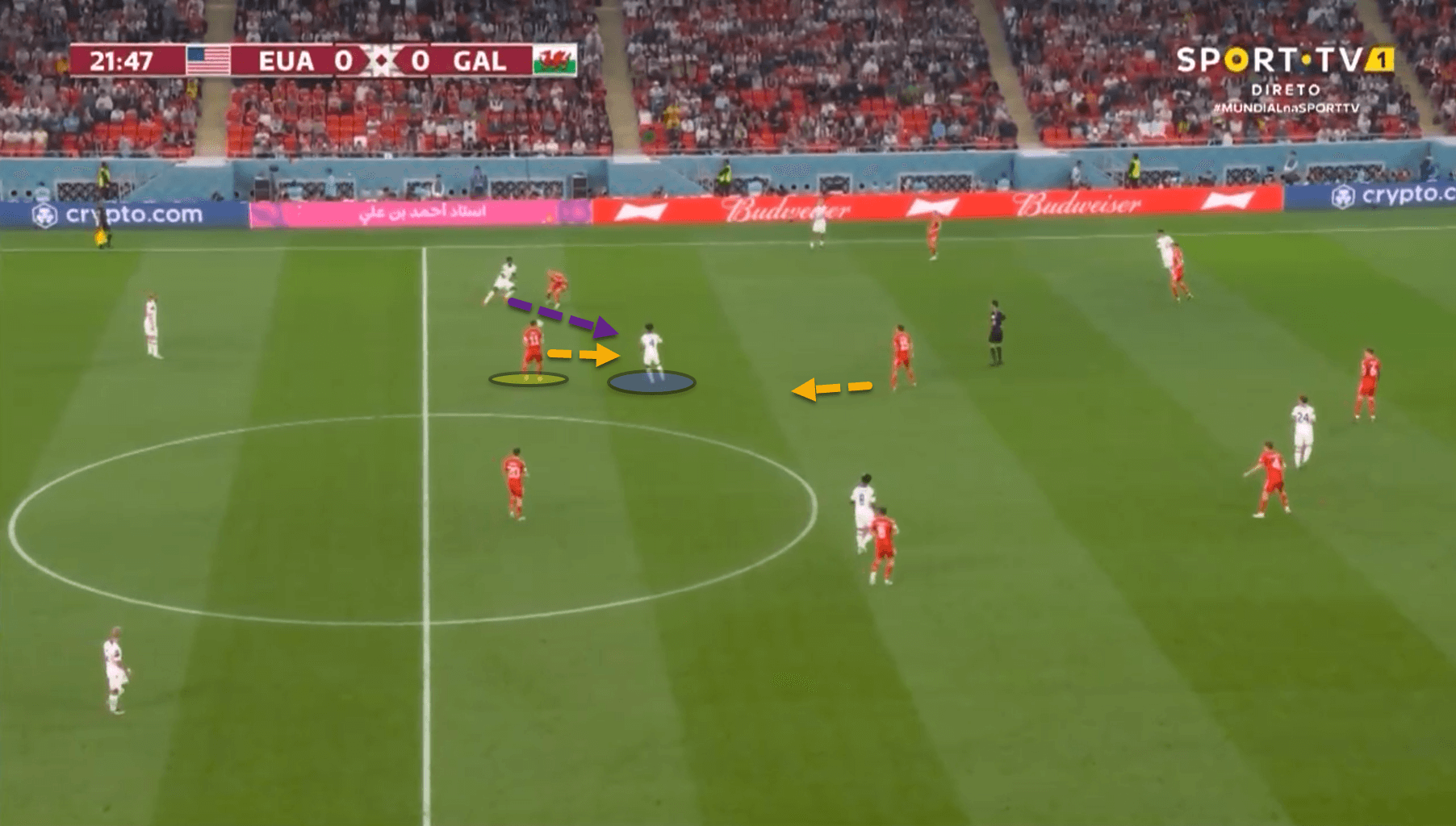 The USA found it far too easy to play to their link man, Adams.

Wales cannot allow this to happen against England as Rice has the ability to control games in the middle of the park, hence why he has been so important for Southgate over the past few years.

Wales’ forward line must be far more aware of their surroundings, ensuring that the passing lane into the West Ham skipper’s feet isn’t a viable option for ball progression from England.

Simply put, quite a niche chain of events need to come to fruition if Wales are to make it to the knockout phase of the World Cup.

Firstly, Page’s side must beat England. If Wales can’t put their British counterparts to the sword, it will be an early goodbye from the competition for the proud nation.

If Wales do manage to take all three points against Southgate’s 2018 semi-finalists, one of two things needs to happen.

Either Iran and the USA will have to draw, or else Wales will need to thrash England, pulling back a goal difference between the two sides of six in order to take their place in the top two.

Many Welsh supporters would love for the second option to transpire. 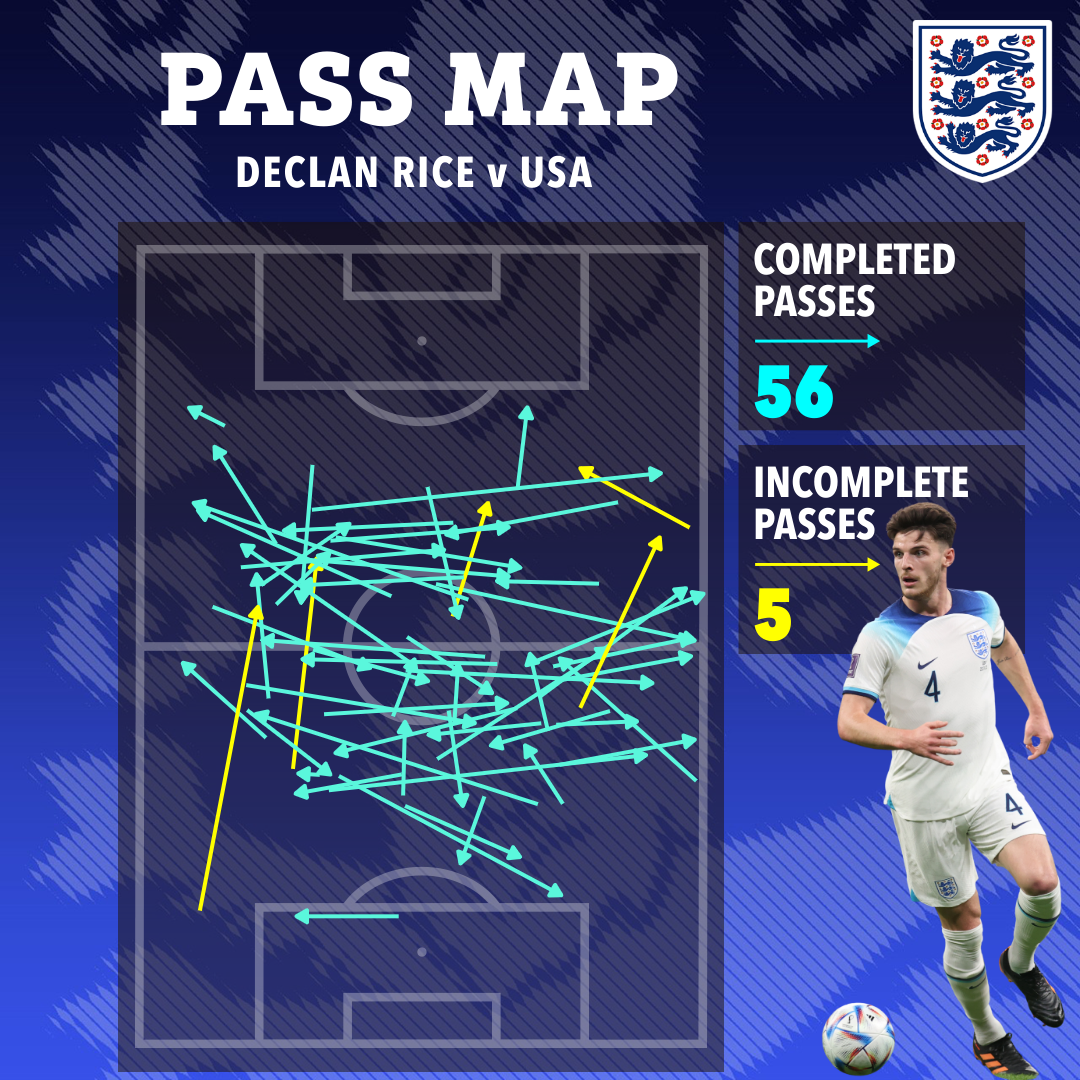 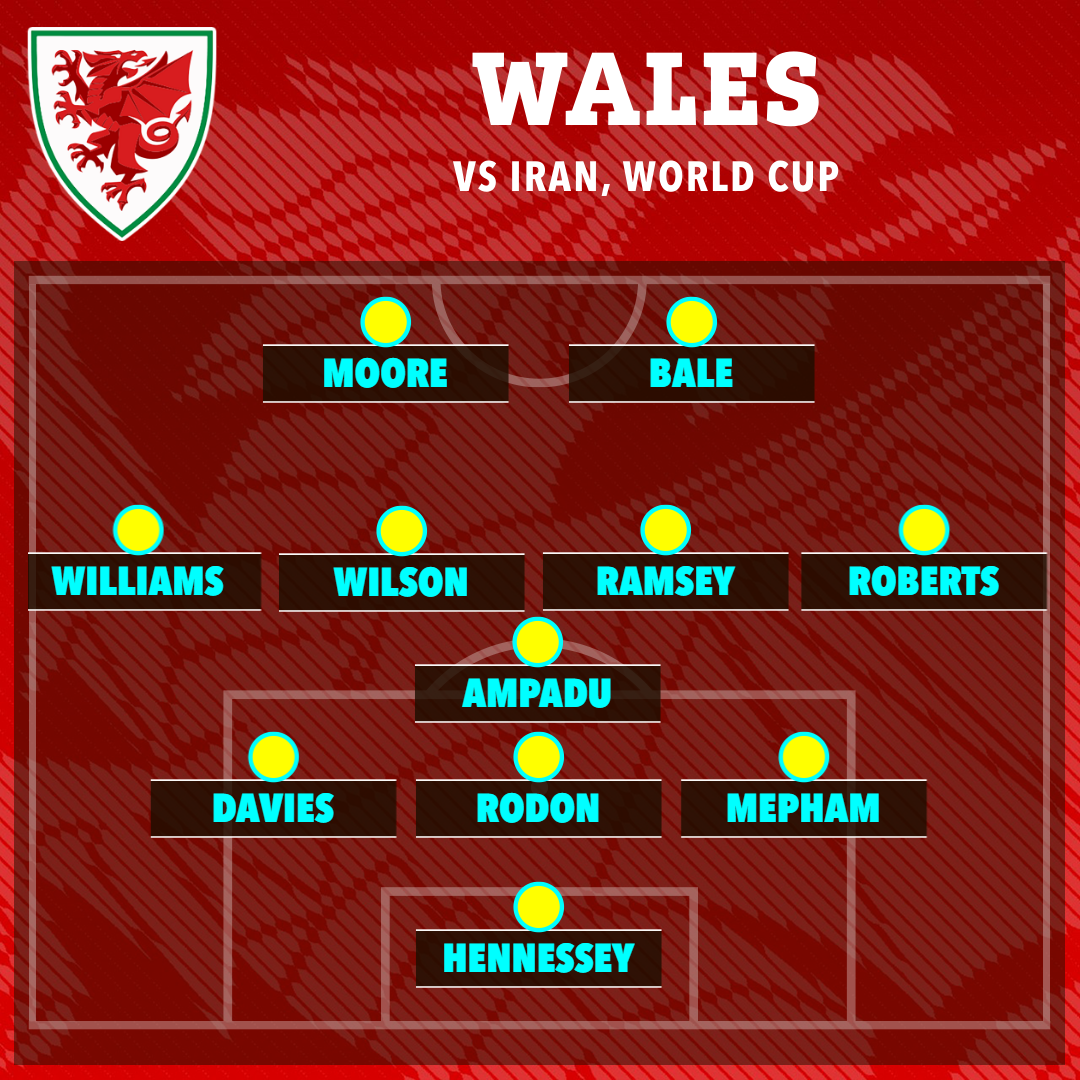 However, if Wales are to have any hope of putting at least four goals past England, Page needs to unleash his attacking threat from their shackles.

In Wales’ two matches so far, the team have had the opportunity to be flexible tactically.

Against the USA, Page demanded that his players sat deep, soaked up pressure and hit the Americans on the break.

And against Iran, Wales were forced to be the dominant side, controlling possession. They were effective in neither instances.

Going forward, Wales’ primary tactic has been to switch the ball to the wingbacks who then whip crosses towards the centre-forwards. 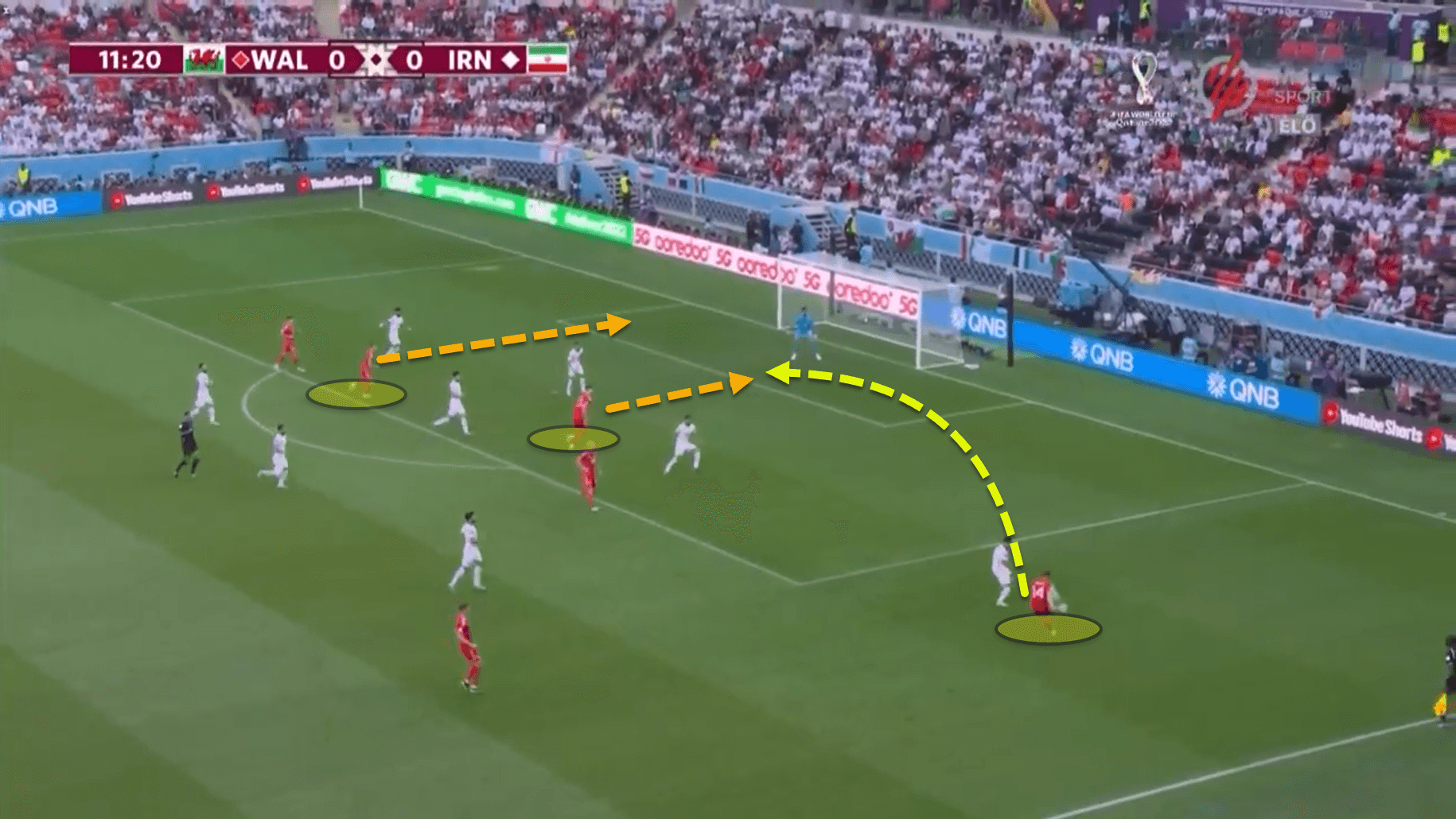 There is nothing wrong with crossing the ball into the box, particularly when you possess a player in the ilk of Kieffer Moore who stands at 6ft 6in tall.

However, if Wales are to put a few past England, they will need to be unpredictable going forward, making runs in behind, going long at times but also trying to progress through the middle when it’s applicable.

With Harry Maguire in the team, the battle between him and Moore will bring a nostalgic vibe to the game, but Wales must ensure that they are not relying on the big man to head home crosses as the only form of attacking threat.

If Page doesn’t manage to create offensive unpredictability within his side, England will keep them out with ease and Wales will be packing their bags by Tuesday night.

So what does this all mean?

The pressure will lean much heavier on the shoulders of the Welsh players heading into this clash.

Wales understand that anything but a win is the end of their World Cup journey.

Even still, it may not be enough if there is a winner from the game between Iran and the USA.

Meanwhile, Southgate will likely set out to ensure that his players are cautious in this game, keeping it tight at the back to prevent Wales from scoring.

England need just one more point to guarantee progression to the next stage of the World Cup and Southgate won’t take any risks to lose that point.