Star Melbourne defender Michael Hibberd is “100 per cent ready to go” for the Demons’ cut-throat semi-final against Hawthorn at the MCG on Friday night, according to Dees coach Simon Goodwin.

Concerns were raised over Hibberd’s availability on Tuesday as he was restricted to running laps following his team’s stunning five-goal win over Geelong in the first elimination final. 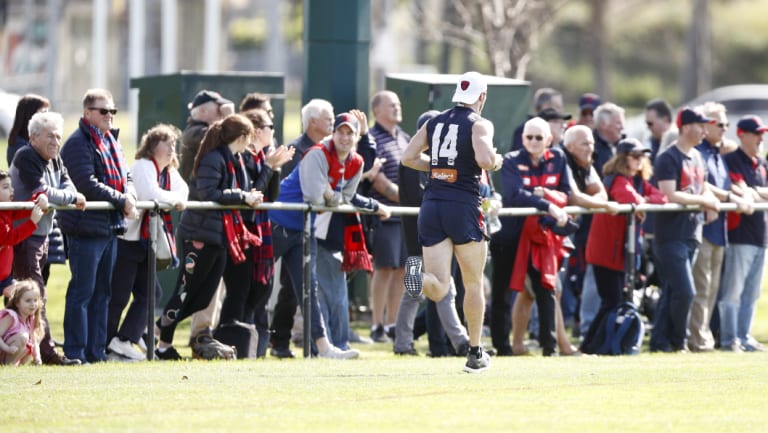 But Goodwin said that Hibberd took it easy earlier in the week because he still had some soreness from the Cats clash and after training fully on Thursday, the former Bomber had been given the green light to face the Hawks.

Goodwin confirmed the Dees had no other major concerns heading into the semi-final, although Dean Kent (AC joint) has been officially ruled out for the rest of the season after deciding to have surgery due to the fact that the injury he sustained in round 23 wasn’t healing quickly.

Having got the monkey off their club’s back last week by winning their first final in 12 years, Goodwin said his players were hungry for more and that the club was openly embracing the potential fairytale of a first premiership since 1964.

“Our challenge as a club and a footy team and a footy department is that when you have that experience and you handle it well and you see the rewards on the back of it, you want more,” Goodwin said at AAMI Park on Thursday.

“So our challenge tomorrow night is to come out there and play with the same intensity and that same want and will and desire and really establish our brand in the game and the way the game should look early.

“We’ve wanted to take our supporters on a journey and on this pathway to where we want to be.

“They’ve suffered a lot of misery and it’s a chance for them to really embrace our footy club and embrace their team and getting behind their team and inspire them.

“The noise coming out of the MCG last Friday was unbelievable from the players’ perspective and a club (perspective) and we want them all to rock up again and give us that excitement again.”

In order to progress further in the finals, Melbourne must get past the experienced Hawks and with key Hawthorn players such as Luke Breust, Jack Gunston, Ben McEvoy, James Sicily and Shaun Burgoyne all having quiet games against Richmond in the first qualifying final, Goodwin was expecting a strong response.

“I think they’ve proven over a long time those players, and Hawthorn footy club, the character that they’ve got so we know that they’ll respond, we know what we’re up against and we know the challenge that it’s going to become,” he said.

The Demons beat the Cats largely on the back of an impressive inside game with their hunger, pressure, tenacity and tackling proving too much for Geelong to handle, but Goodwin insisted the Hawks were capable of matching his team in those areas.

“Without question people underestimate what they’re like in the contest,” he said. “We’re certainly not underestimating that for one bit.”

When Hawthorn and Melbourne last met, the Hawks scored a convincing 67-point win in round four, but Goodwin said that game was such a long time ago that he hadn’t paid too much attention to it as he prepared for this week’s game.

The Hawks will be missing one of their most important players on Friday night in star defender Ben Stratton (hamstring), but Goodwin downplayed his absence.

“The good clubs and the ones that are still left in the tournament right now have players that are missing but are able to adapt,” he said.

“We understand the chatter, that chatter’s been around for five years,” he said.

“Jesse is a Melbourne person and a Melbourne player and we love having him at this football club so that won’t change.