Greater Western Sydney's injury woes have worsened with veteran defender Heath Shaw out for the rest of the season with his knee injury.

The dual All Australian is due to see a surgeon on Wednesday to discuss the best course of action to repair damage to his posterior cruciate ligament. The Giants will not know before then exactly how long Shaw will be out but have confirmed he will not be returning to the field this year. He is contracted for next season.

The 32-year-old had been hopeful after the game on Saturday night of being back in six weeks, which would have kept alive his hopes of playing in a grand final if the Giants made it. 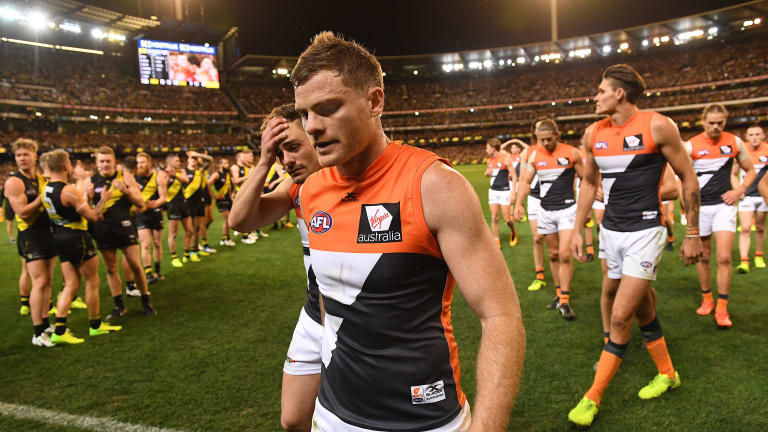 Heath Shaw won’t be back this season, even if the Giants make the grand final.

"There might be a bit of insider trading on this one. I can tell you that won't happen (a grand final return)," the Collingwood great told Macquarie Sports Radio.

"Heath's … torn his medial ligament and a few other little things.

"It's not an ACL which is good, but anywhere between a three- and six-month rehab, I've heard this morning."

The AFL veteran, who was on a run of 96 straight games, suffered the knee injury about halfway through the last quarter of GWS's crucial 14-point victory over Adelaide on Saturday night.

His knee twisted after a teammate inadvertently crashed into him while tackling Crows livewire Eddie Betts.

In a show of mutual respect after many battles over the years, Betts shook Shaw's hand and wished him well as he was taken from the field on a stretcher.

The 283-game dashing half-back flanker won the 2010 premiership with Collingwood before crossing to GWS for the 2014 season.

Earlier this week, Tony Shaw said his nephew plans to play on next season regardless of whether the knee injury proves to be season-ending.