London: Nathan Grey’s brief as Wallabies defence coach is to study his opponents as intently as possible and formulate a plan to nullify their attack.

In some instances, Grey needs to get into the head of the other team’s attack coach. That might be a little easier this week than others. 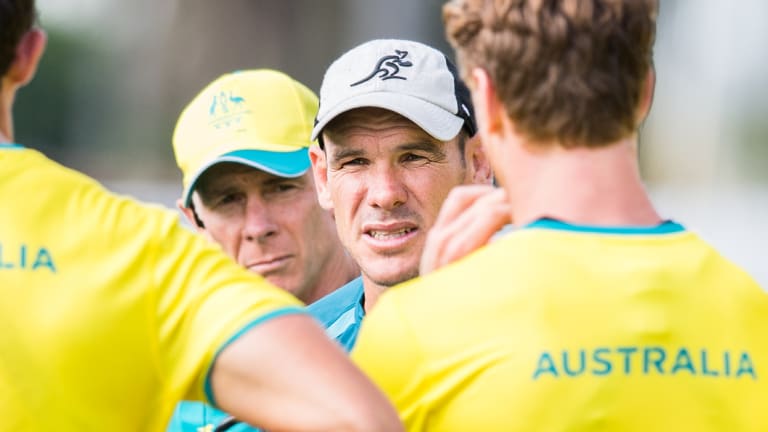 Grey’s son Toby, you see, has a godfather and that man is Scott Wisemantel, England’s attack coach. It will be a case of two close mates trying to outsmart one another.

“Scotty actually coached me when I first came into the Waratahs and was a very good family friend,” Grey said. “He’s the godfather of my son. I obviously have a very close relationship with Wisey and Gab his lovely wife. It’s going to be interesting, we’ll see each other out on the pitch.

“Our wives, Gab and Steph, kicked off a good friendship and he’s an exceptional man. He’s a very good surfer, knows everything about the water, a really knowledgeable guy and someone who I call a really dear friend.”

Wisemantel, who played for the Parramatta Eels between 1988 and 1992, has made his name in rugby since then, with stints at the Wallabies as a skills coach during Eddie Jones’ tenure, the Waratahs, as well as Japan when Jones was in charge for the 2015 World Cup.

He came on board for England’s three-Test series against South Africa in June before being convinced by Jones to stay on.

“I see he’s running the water,” Grey said. “We’ll probably be tripping each other and having a bit of friendly banter out there at Twickenham.

“I sent him a text message asking him if they’re going to run that 13-man lineout again and I haven’t got a response. No doubt I’ll look forward to having a chat probably before the game and definitely having a beer after it.”

All pleasantries aside, there will be no love lost on the field on Saturday as England look to chalk up a sixth consecutive victory against Australia – an achievement neither team has managed since the rivalry began in 1909.

Wisemantel will be doing plenty of homework this week, looking for ways to penetrate an Australian defensive live that has been uncharacteristically solid in recent weeks.

The Wallabies have conceded just 16 points in their last two Tests and the only try they have let in came off a poor Bernard Foley pass that went to ground before Italy's Mattia Bellini streaked away to score untouched.

Grey copped no shortage of criticism last year, so it is only fair to give him credit when things are clicking.

“It's good for the team,” Grey said. “I sound like a broken record but we're searching for that consistency and being able to do that for a couple of weeks. Really looking to execute our defensive systems and take it up another notch.

“The guys have got a lot of belief in what they're doing and then they're executing on the field. It is satisfying and it gives the guys good energy, so we're looking forward to delivering that and taking it up another level."

Grey said that while Australia would keep the same defensive structures in place, they would have to adjust plans to negate what England throw at them.

“We’ve had a really good look at what they’re bringing to the table from an attacking perspective and we’ll be well prepared for what we believe where their threats are and how they’re going to target us,” Grey said. “You’re always looking to tweak things to try and get a little bit of an advantage in the way you’re setting up or executing or how you want to defend.

“That’s part of the cat and mouse of rugby of trying to pick things apart and it’s a challenge we’re looking forward to.”