The fate of this year's Australian Grand Prix is the subject of live negotiation between the Victorian government and Formula One management as the state battles to contain a coronavirus outbreak.

The government confirmed on Tuesday that talks were "ongoing" over this year's calendar after an influential motorsport website reported that the race was set to be postponed. 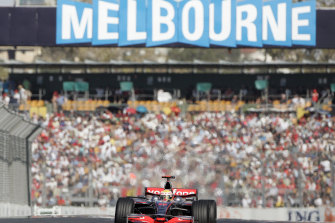 Officials say talks about the future of this year’s Australian Formula 1 Grand Prix are ‘ongoing’ amid reports the event has been called off.Credit:AP

The site, autosport.com, reported overnight the event could be rescheduled as Australia enforced strict travel restrictions amid global fears over the emergence of a new strain of COVID-19.

"Discussions between the Australian Grand Prix Corporation, the Government and Formula One management about the Formula One calendar for 2021 are ongoing," a government spokesman said.

"As part of those discussions, the government will continue to prioritise public health considerations while protecting our major events calendar."

The state's major events schedule is under close scrutiny amid fresh community transmission of COVID-19 in Victoria after a two-month period without a locally-acquired case.

Australian Open tennis officials are set to arrive in Melbourne this month and will undergo mandatory two-week quarantine before the rescheduled tournament is held from February 8.

However, plans for the grand slam are in disarray after a contract to quarantine international tennis players at The Westin Melbourne were abruptly cancelled.

Last year's Australian Grand Prix was cancelled at the last minute after Formula One teams and hundreds of staff had already arrived in Melbourne.

As recently as November, race organisers were optimistic that authorities would give the green light to a March 21 start date at a reconfigured Albert Park circuit that caters for crowds of up to 50,000. Those plans were subject to COVID-19 remaining under control.

At the time Australian Grand Prix Corporation chief executive Andrew Westacott confirmed that F1 personnel arriving from overseas would need to quarantine but those specific requirements would be determined by government and health authorities.

"We have all put in the hard yards over winter to hopefully allow us to kick-start the economy, not just from a tourism and hospitality point of view but also a major events perspective," he said.

"'We are the third of the big summer events, the Boxing Day cricket, the Australian Open tennis and then the Grand Prix and that's where Melbourne needs to shine."