The Gallagher Premiership club said the 33-year-old had made the decision to retire from rugby with immediate effect.

In a statement, Gloucester said: ‘Gloucester Rugby is deeply pained to announce that Ed Slater has been diagnosed with motor neurone disease (MND). 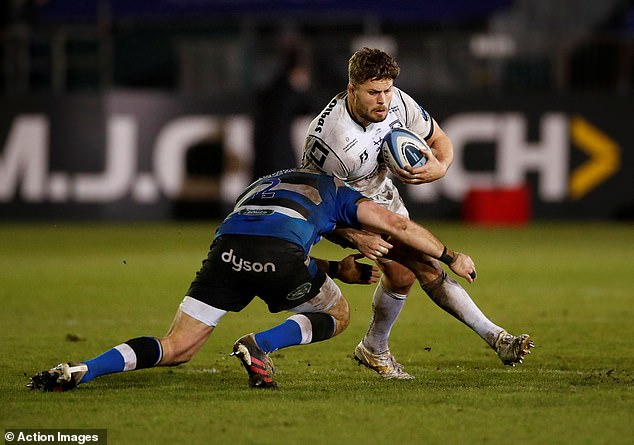 ‘Following six months of testing, Ed’s diagnosis was confirmed last week, and as a result, with the support of his family, friends and Gloucester Rugby, he has made the difficult decision to retire from professional rugby with immediate effect. 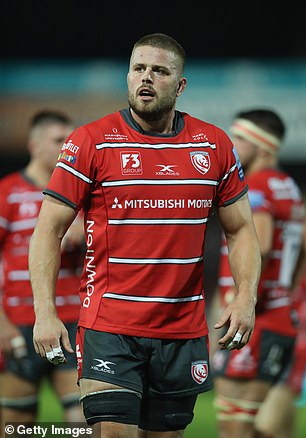 The lock has been forced to retire following the diagnosis

‘Everyone at Gloucester Rugby – players, management and staff – are entirely committed to supporting Ed, his wife Jo and his three children in whatever way required.

‘We know the same will be true of Gloucester and Leicester fans, and the wider rugby community.

‘While Ed, his family and the club take time to determine next steps, Gloucester Rugby have opened a JustGiving page.

‘The direction of these funds will be determined in due course, whether it be supporting Ed and his family directly and/or a selected MND charity.

‘Neither the club nor the Slater family will be making any further comment at this time, and kindly request that those wishes be respected.’

Slater, who has featured in a number of England squads and represented England Saxons, joined Gloucester in 2017 following seven years with Leicester, where he served as club captain.

Leicester said they were ‘extremely saddened’ by the news, while Premiership Rugby tweeted: ‘Everyone at Premiership Rugby would like to offer their 100% support to Ed, his family and @gloucesterrugby We will support you @edslater in whichever is best for you and your family’. 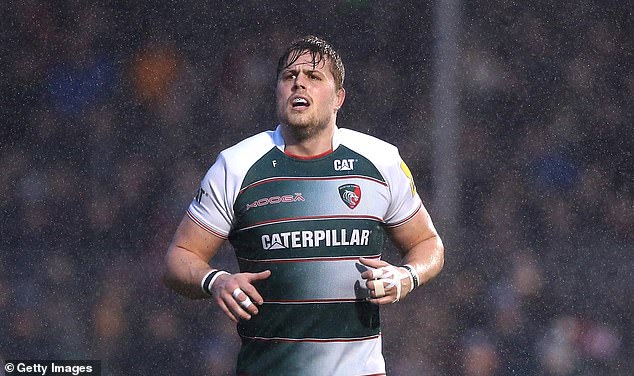 Slater was also a Leicester Tigers player for seven years, captaining the side for two seasons

The Rugby Players’ Association tweeted: ‘The RPA team and members are extremely saddened to hear of the retirement of @edslater today due to MND diagnosis. He’s been an outstanding player for Gloucester and Leicester over his long and distinguished career.

‘We will always be here to help and support Ed and his family as they face the challenges ahead, and will be on hand to provide our dedicated services for them through this difficult time.’

Gloucester added that the club was grateful for support already received by the My Name’5 Doddie Foundation.

The Foundation was set up by former Scotland and British and Irish Lions lock Doddie Weir, who revealed in June 2017 that he was suffering from MND.

Weir has been driven to help fellow sufferers and seek ways to further research into an, as yet, incurable disease. 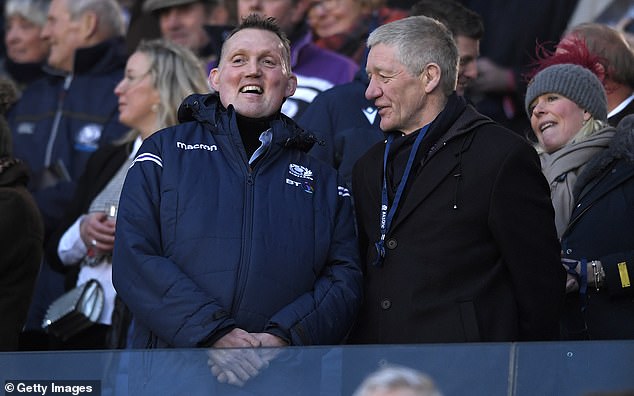 The My Name’5 Doddie Foundation, set up by Scotland and British and Irish Lions lock Doddie Weir, has already been helping Slater

There is no cure for MND and the disease is fatal, however the disease progresses at different speeds in patients.

People with MND are expected to live two to five years after the symptoms first manifest, although 10 per cent of sufferers live at least 10 years.

The NHS describes motor neurone disease (MND) as: ‘An uncommon condition that affects the brain and nerves. It causes weakness that gets worse over time.’

It was first discovered in 1865 by a French neurologist, Jean-Martin Charcot, hence why MND is sometimes known as Charcot’s disease.

However, according to Oxford University Hospitals: ‘Nearly 90 per cent of patients with MND have the mixed ALS form of the disease, so that the terms MND and ALS are commonly used to mean the same thing.’

Slurred speech is an early symptom and may later worsen to include difficulty swallowing food.

Muscle cramps or twitches are also a symptom, as is weight loss due to leg and arm muscles growing thinner over time.

MND is difficult to diagnose in its early stages because several conditions may cause similar symptoms. There is also no one test used to ascertain its presence.

However, the disease is usually diagnosed through a process of exclusion, whereby diseases that manifest similar symptoms to ALS are excluded.

The NHS says that MND is an ‘uncommon condition’ that predominantly affects older people. However, it caveats that it can affect adults of any age.

The NHS says that, as of yet, ‘it is not yet known why’ the disease happens. The ALS Association says that MND occurs throughout the world ‘with no racial, ethnic or socioeconomic boundaries and can affect anyone’.

It says that war veterans are twice as likely to develop ALS and that men are 20 per cent more likely to get it.

Lou Gehrig was one of baseball’s preeminent stars while playing for the Yankees between 1923 and 1939. Known as ‘The Iron Horse,’ he played in 2,130 consecutive games before ALS forced him to retire. The record was broken by Cal Ripken Jr. in 1995

As well as being known as ALS and Charcot’s disease, MND is frequently referred to as Lou Gehrig’s disease.

Lou Gehrig was a hugely popular baseball player, who played for the New York Yankees between 1923 and 1939.

He was famous for his strength and was nicknamed ‘The Iron Horse’.

His strength, popularity and fame transcended the sport of baseball and the condition adopted the name of the sportsman.

He died two years after his diagnosis.