ENGLAND desperately needed something to light the fires of hope from their last match before the World Cup.

With the Three Lions having gone over 450 minutes without a goal from open play and suffered the indignity of Nations League relegation, Gareth Southgate's critics were louder than ever ahead of Germany's visit to Wembley.

And the howls of derision grew louder as Hansi Flick's side, who have not been in the best form themselves this year, went 2-0 up in the 67th minute.

But then England's spark did arrive in the form of three goals in 12 minutes, a swarm of untethered football with an intent rarely seen in recent fixtures.

The hosts' third goal came from the penalty spot and the inevitable right boot of Harry Kane, whose record of 51 goals in 75 games puts him among the most prolific goalscorers in international football. 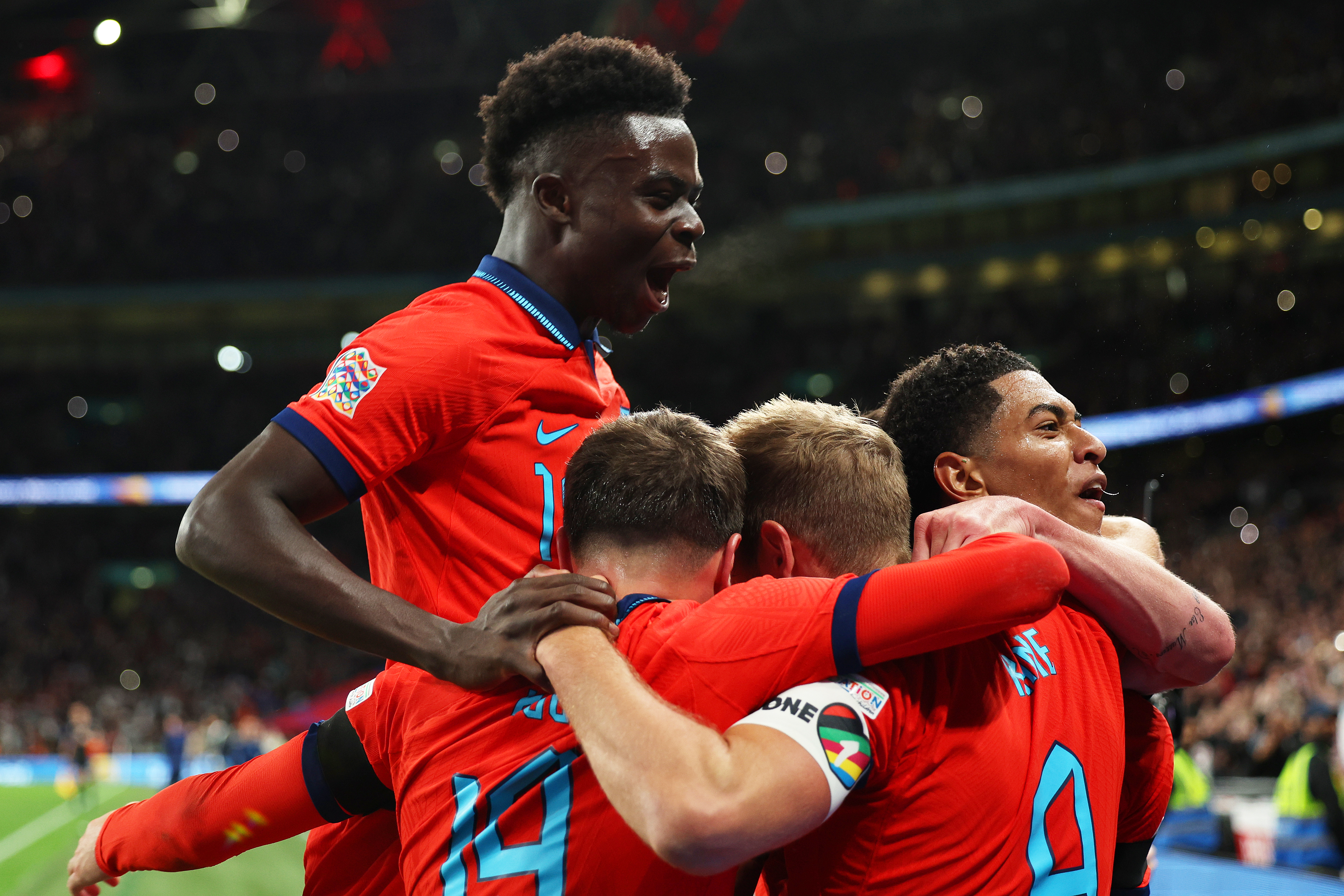 This injection of optimism, plunged into the heart of England fans like Mia Wallace's adrenaline shot in Pulp Fiction, was countered by Kai Havertz's opportunistic poke to make it 3-3.

Still, the 12-minute blitz served as a reminder that so many of England's attacking players are potential match-winners – it also ensured the Lightning Seeds, David Baddiel and Frank Skinner would receive their full allotment of royalties come winter.

Southgate deserves credit for his substitutions on the night as the introduction of Mount and Saka undoubtedly added impetus but many supporters saw the three-goal surge as an example of what can be achieved when the team breaks free of the shackles imposed by the coach's risk-adverse approach.

"Set this team free Gareth" was the call from Ian Wright on Twitter, a sentiment echoed by Gary Lineker and swathes of fans up and down the country.

Supporters were generally happy to tolerate defensive, structured tactics when results were positive – let's not forget a double pivot of Declan Rice and Kalvin Phillips came within a couple of penalties of anchoring England's first major trophy since 1966.

However, patience has evaporated rapidly with England now without a win in six, disastrous preparation for a World Cup. 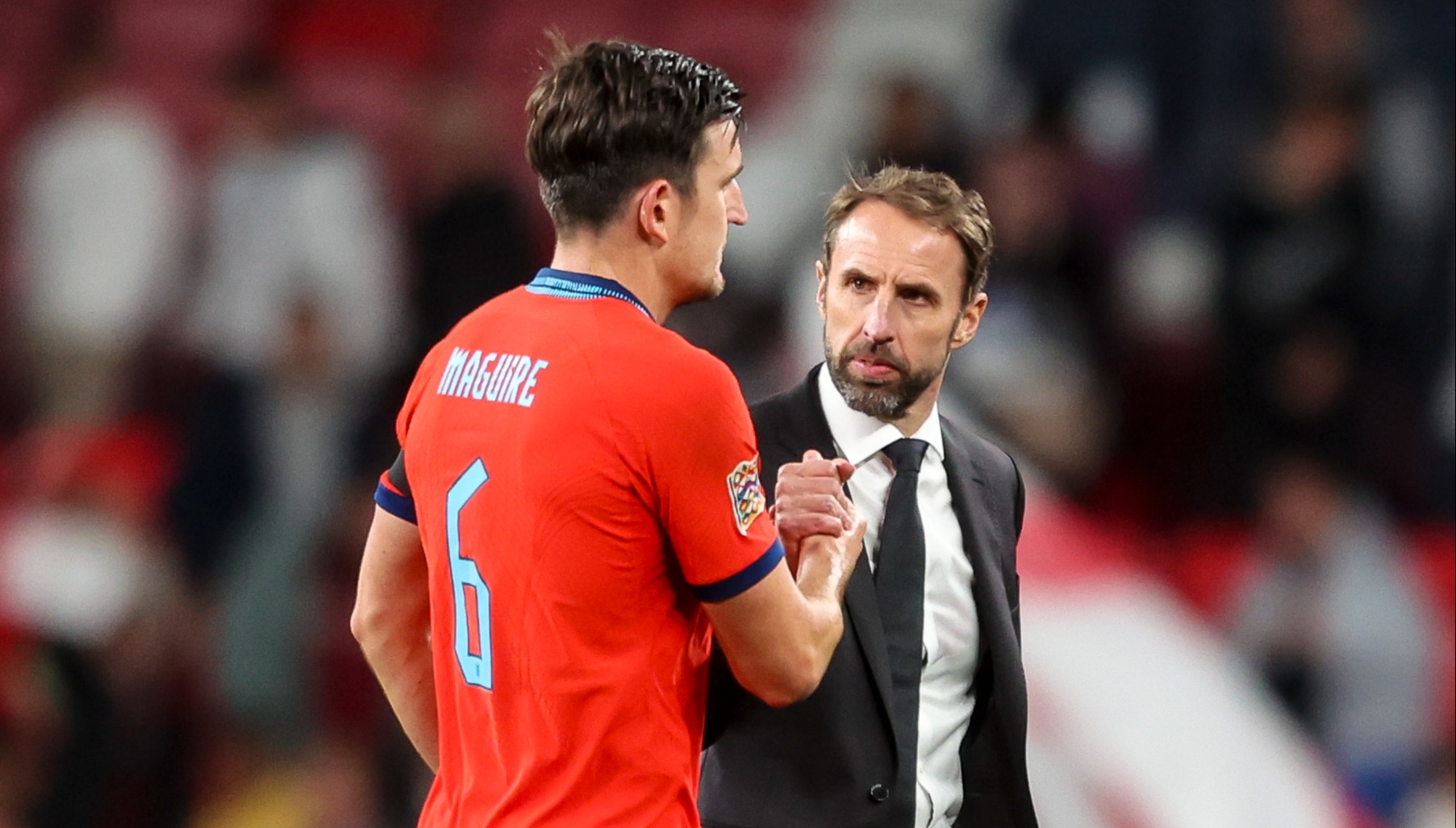 Throughout the Nations League campaign, England's passing has been ponderous and their movement snail-slow.

Fatigue may be a factor but many players from other nations have endured similarly demanding workloads in the last year.

There's no escaping the awkward fact that some individuals have looked a pale imitation of themselves on the international stage, Phil Foden being the most prominent example.

The 22-year-old is yet to truly light up an England game in the same manner he has done for Man City multiple times since establishing himself as a first team regular.

He already has three goals and two assists at club level this term but against Italy and Germany he looked as if he could play for hours without a substantial flourish in the final third.

The overriding feeling is that Saka, recently voted England's Player of the Year, is the superior option to start on the right wing (not left wing-back) against Iran come November 21st. 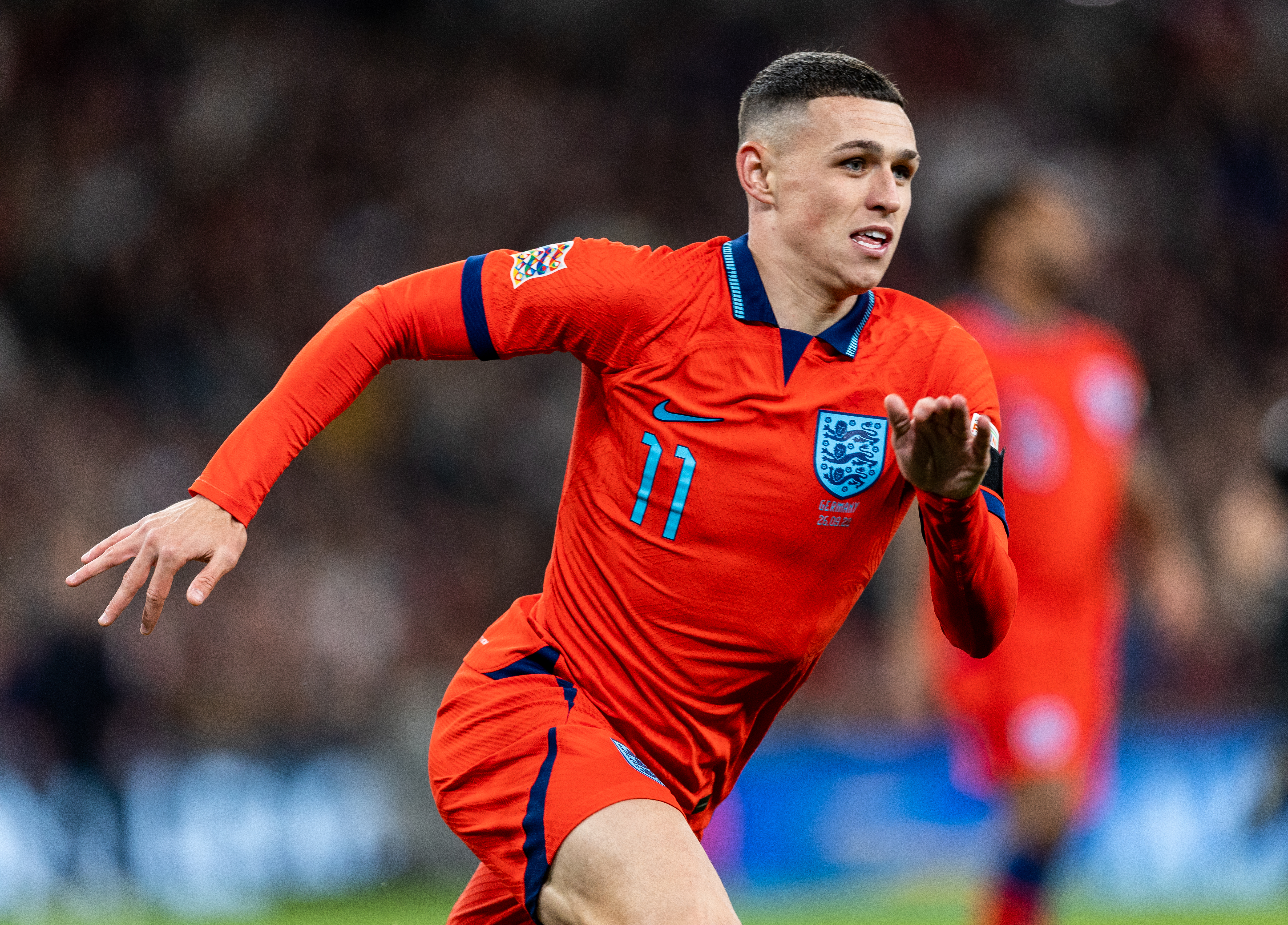 Southgate's biggest headache stems from centre-back where his loyalty to one of his favourite players will now be tested like never before.

Let's be clear, Harry Maguire has generally performed very well for England, even when his club form has been comical.

That being said, last night's second half was a horror show.

The Man United defender gave the ball away just prior to his foul on Jamal Musiala in the box, a stonewall penalty eventually awarded upon VAR review.

And it was Maguire who was initially dispossessed in the build-up to Die Mannschaft's second goal after a frustratingly hesitant dribble deep in German territory.

Southgate has remained loyal to Maguire on the basis that his performances for England have been significantly better than those witnessed at Old Trafford in recent times but last night's error-strewn showing underlined the fear that many fans have, that his mistakes will directly lead to elimination at a major tournament.

With John Stones departing prematurely with what looked like a hamstring injury, centre-back is now a huge area of concern for the Three Lions, which makes it even more curious that Fikayo Tomori, who has been consistently excellent for reigning Serie A champions AC Milan, wasn't given a single minute to prove his worth this international break.

Eric Dier's penalty-box defending should have earned him a seat on the plane to Qatar but Southgate's comments around the matter suggests Maguire will start once the tournament is underway, a significant risk. 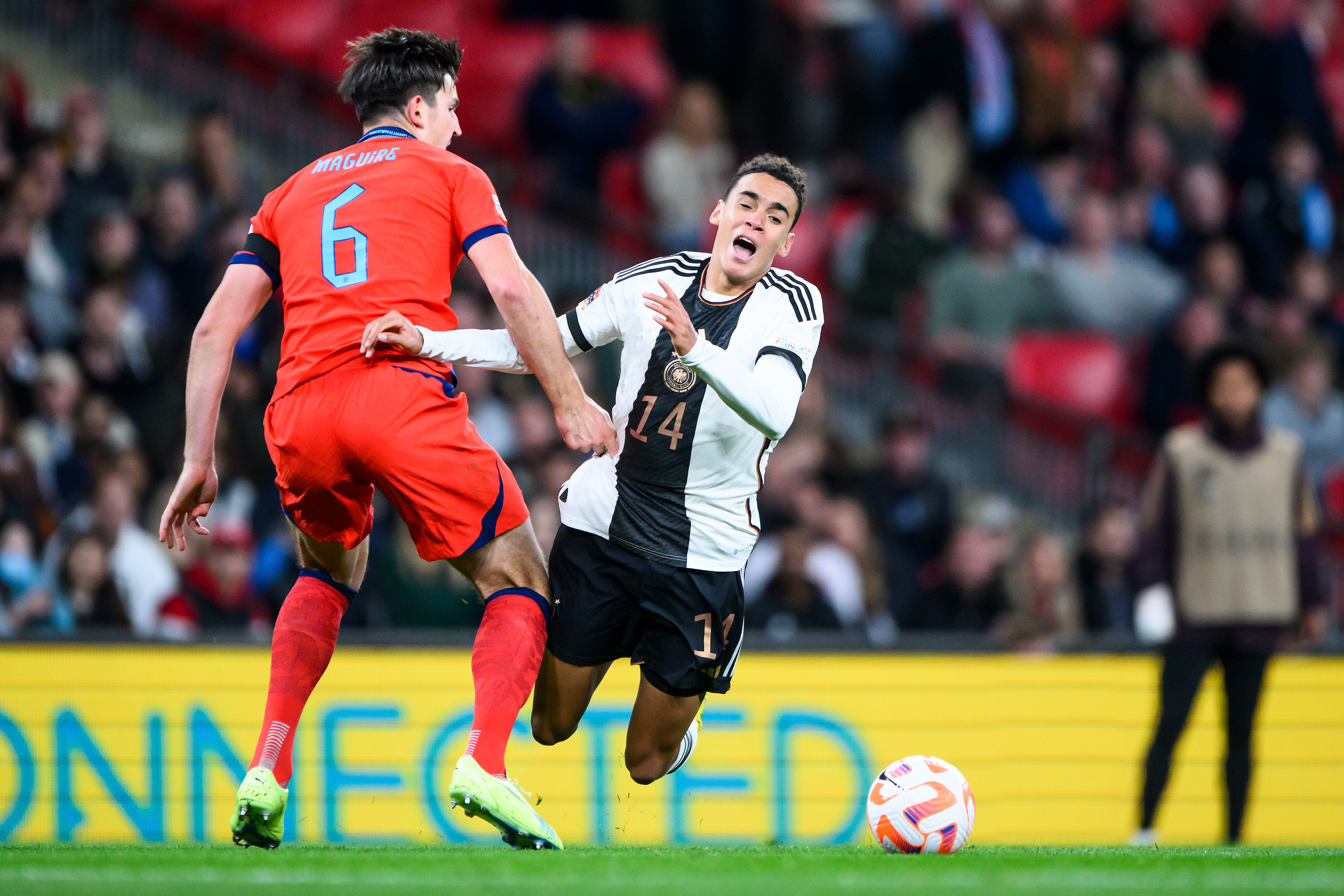 Despite being absent through injury, last night was a reassuring one for Jordan Pickford, one of Southgate's other favourites, as Nick Pope looked uncertain playing out from the back before dropping a clanger for Germany's late equaliser.

Like Maguire, the Everton goalkeeper has generally played very well for England even when he's simultaneously looked vulnerable at club level, particularly in major tournaments.

Given that Pickford started the season in great form for the Toffees before he was sidelined, there's no reason he shouldn't be No1 in Qatar.

Phillips has also been something of a teacher's pet under Southgate and another player who justified his repeated selection with an impressive Euro 2020 campaign.

However, the development of Jude Bellingham, who was named Player of the Match against Germany, means it will be extremely difficult for the Man City midfielder to reclaim his place, especially with injury concerns and reduced game time at club level having switched Elland Road for the Etihad in the summer.

Surely Bellingham is a guaranteed starter? The 19-year-old already looks nailed on for 100 caps. 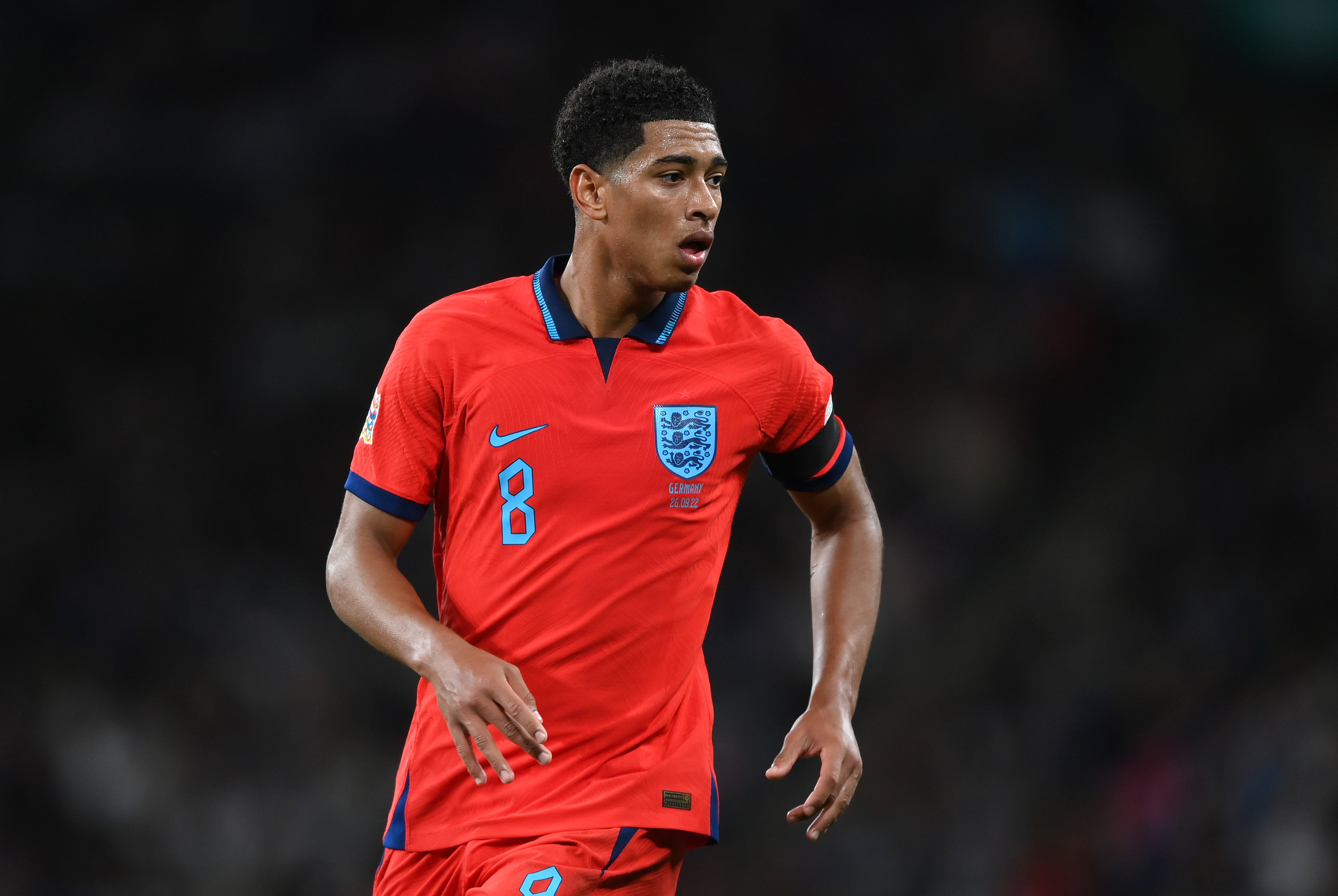 The overriding question Southgate will have to answer is whether, at this late juncture, it's best to move away from the pragmatic approach that has undeniably improved England's fortunes in recent years?

Should he ditch his most-trusted lieutenants and let England off the leash or should he keep trying to grind his way to glory?

Much of what Southgate has implemented should be maintained, most importantly the drastically improved sense of camaraderie, something the Golden Generation of 2002 – 2006 critically lacked according to the likes of Rio Ferdinand, Gary Neville and Steven Gerrard.

But the 52-year-old's reluctance to compromise some of his tactical beliefs may prove fatal.

To abandon one approach in favour of another and implement the change during the first game of a World Cup feels extremely rash – it would mean binning years of preparation and training ground rehearsals.

However, if England fail in Qatar playing cautious football and are undone by errors from out-of-form players who perhaps shouldn't even be in the squad, then it will be a massive opportunity squandered, one that would probably cost Southgate his job.

What might sway the once-beloved gaffer's mind is the feeling that most right-minded fans wouldn't mind if England were eliminated in the knockout stages so long as the team was picked on merit and the structure allowed the attacking players freedom to express themselves.

No reasonable Englishman expects World Cup glory, but to fade out of one with a whimper is inexcusable.

UK airport to permanently CLOSE as flights are stopped