“To be honest, it’s one of the first things I thought about when I got injured,” he said. 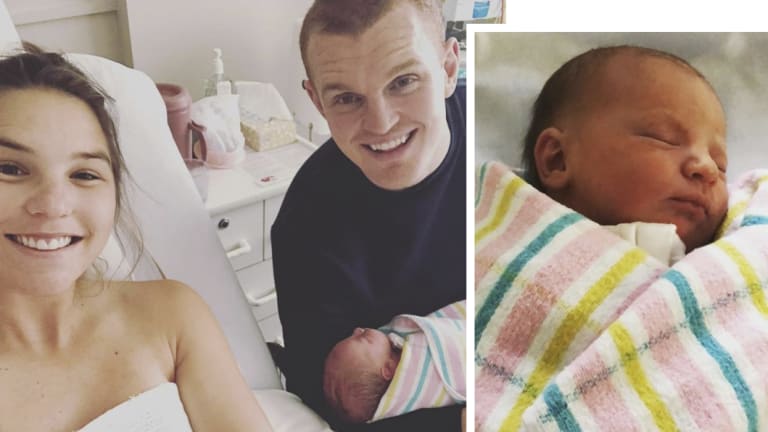 Ex-NRL star Alex McKinnon and his wife Teigan welcomed their first child into the world.Credit:Instagram/@alexmmckinnon

“I just had absolutely no idea what it meant. It wasn’t until we went and saw a doctor in hospital maybe four months after my injury that I got a bit of comfort and certainty around the ability to have kids. But you never really know, I suppose, until you get the green light and you actually have one.”

McKinnon became a dad for the first time at 1.30pm on Sunday when his “amazing” wife Teigan gave birth to “perfect” little Harriet Anne in Newcastle Private Hospital.

Harriet arrived a day before the couple’s first wedding anniversary on Monday.

An emotional McKinnon, who was by Teigan’s side for the birth, said it was an unbelievable experience.

“It’s easily one of the biggest and best days of my life,” he said.

“I’m so happy to see the baby healthy and to see Teigan healthy as well.

“Her performance was incredible. I knew she was amazing before that but for her to do that, it blew me away.”

Asked about becoming a father, he told Fairfax Media: “It’s crazy obviously. I was over the moon when it happened and still can’t really believe it to be honest.

“It all went really well. Teigan starting getting contractions through the night and we got to the hospital about 9 o’clock in the morning [on Sunday] and had our little girl by 1.30.

“Being in there for the birth, it was just unbelievable. To see what Teigan did, it didn’t surprise me, but when you go through something like that, there are so many different emotions. But she was amazing – incredible, and the baby, well she is perfect.”

McKinnon said the couple were aware they were having a little girl.

“We waited a fair while – about 16 or 17 weeks,” he said. “But we got a test done one day and the lady came back and asked did we want to know what it is and Teigan looked at me and said “yep” so we ended up finding out.

“We didn’t tell people for a while but we just got to a point where we thought, what the heck, and we let it out.

“Teigan didn’t have any real problems with the pregnancy and like I said, the baby is perfect. She weighs 6 pound, 15 ounces [3.15 kilograms] and is 49 centimetres long.”

While he knows parenting will be challenging, there is nothing he is looking forward to more.

“When I finally came home to Newcastle from hospital after the injury, to see dads and families running around with kids at the beach and kicking the footy and doing all that stuff – that was one of the toughest times of my life,” he said.

“To see all that stuff and realise I may never be able to do that.

“But as time passed, you start to see a different side of life and become very grateful I can do this. It’s a different experience than what it would have been before [the injury] but who knows, it could be better.”