We all paced nervously in the change rooms. It had been a long year, but we had made it to the final stage. Just one more game to go, one more opponent standing between us and glory. It was grand final day.

The rooms were pungent with footy potpourri. The smells of liniment, sweat, discarded ankle tape and Juicy Fruit filled the air. Our eyes were drawn to our team manager as he watched proceedings out on the ground through the gap in the door. Finally, he turned to us and gave our coach the nod. It was time.

The coach gave us one more burst of theatrical encouragement and we followed our skipper out the door and to the awaiting car horn soundtrack. Over the bitumen we were careful with each step, but as we ran down a small embankment of mud we were much surer of foot. 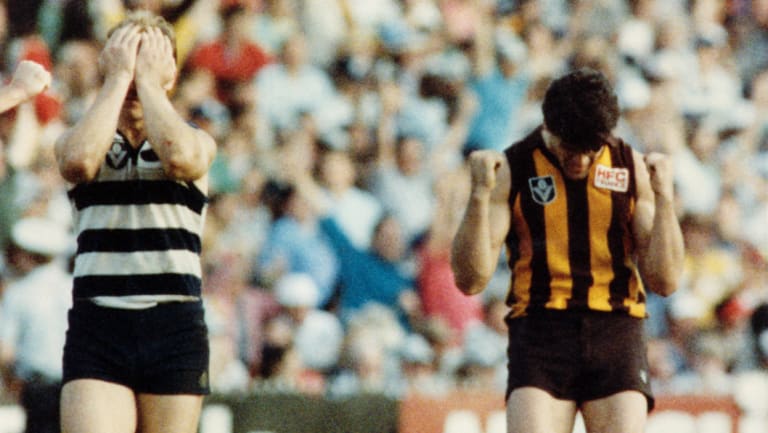 Gary Ablett and Chris Langford at the final siren in 1989.

Standing proudly before us was the banner our mums had crafted the night before on somebody’s shag-pile, lounge-room carpet. For most of us, this was our first banner. What a moment it was going to be.

I was at the back of the pack, which was the wrong spot. The crepe paper would probably be torn to shreds by the time I ran through it. It also turned out to be the hit spot for when the mums holding the broomsticks at the side of the banner let go. I took a hit to the side of the head. What a moment.

Maybe it jolted us out of the dreamy state we were in, because we played like gods that day. The Warragul under 12 Colts. Premiers. We were 11 years old. I’ll remember that day forever.

Forever is a heavy word. Its gravity in a football sense weighs this week, every year. The glory or defeat that awaits the Magpies and Eagles will drift in and out of the players’ thoughts all week. All the chips are on the table. Everyone knows what’s at stake on grand final day.

If there was an image to go with it, you could do a lot worse than the agony and ecstasy of Chris Langford and Gary Ablett snr as the final siren sounded on grand final day, 1989.

The optimism and heartache of finals football is a curious mix. The smell of jasmine in the air we instinctively link with optimism. If your side is still in, you’re a chance. But only one clan will feel the ultimate glory. Lingering questions and pain await everyone else.

The Tigers and the Demons had lungs full of optimism before last week, but it was replaced by the taste of battery acid by half-time of the preliminary finals. This game can stab you and twist the blade on a moment’s notice.

The Tigers had the chance to elevate themselves from the best team of the moment to one of the great teams, but it slipped out of their grasp on a dirty night for them. But they’ll be back next year to take another swing at that title.

The Demons rode the same sort of emotional wave we’ve seen carry the past two premiership teams, but it crashed onto the shores of Optus Stadium. In isolation, it was a disaster, but they were serious challengers this year. Their supporters gathered around them like we hadn’t seen in years. That same group of players will step into the ring next season. It ain’t over for the Dees. 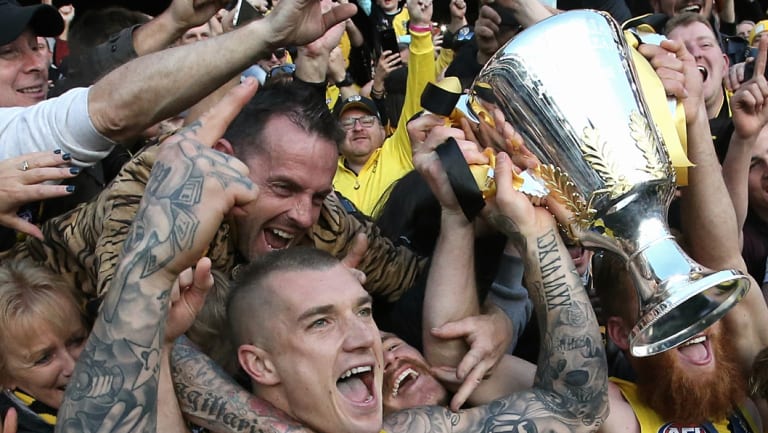 What it’s all about.

With two emphatic preliminary finals wins, we could hardly argue that we didn’t get the two best teams for this year’s grand final. Collingwood have been declared favourites, yet even in this, you can’t help but wonder why not the Eagles, so comfortable was their preliminary final win. They face each other running on top of the ground.

I once described grand final week as a juicy cheeseburger, full of fatty, salty goodness in the way of great stories and characters. Here is it again: two quiet, stoic captains, a plethora of exhilarating forwards and brave defenders. A miracle man in Tyson Goldsack. Two coaches seeking premiership redemption. Mason Cox, Kennedy, Darling. So many good stories.

But like any good cheeseburger, there needs to be a gherkin. Something sour or bitter to balance the flavours and cut through all that moorish beef. For different reasons, I’ll be taking a moment to think of Andrew Gaff, Nic Naitanui, Lynden Dunn and Sam Murray and so many others before the game starts on Saturday. It will have been an uncomfortable few days for those boys in the build-up.

This game and that notion of forever all come to a head on grand final day. A day the players will never forget.