BROCK Lesnar is officially a free agent after the athlete and the WWE agreed to go their separate ways – at least for now.

The 43-year-old fighter and the WWE failed to reach an agreement on a new deal, which allows The Beast Incarnate to focus on his next move. 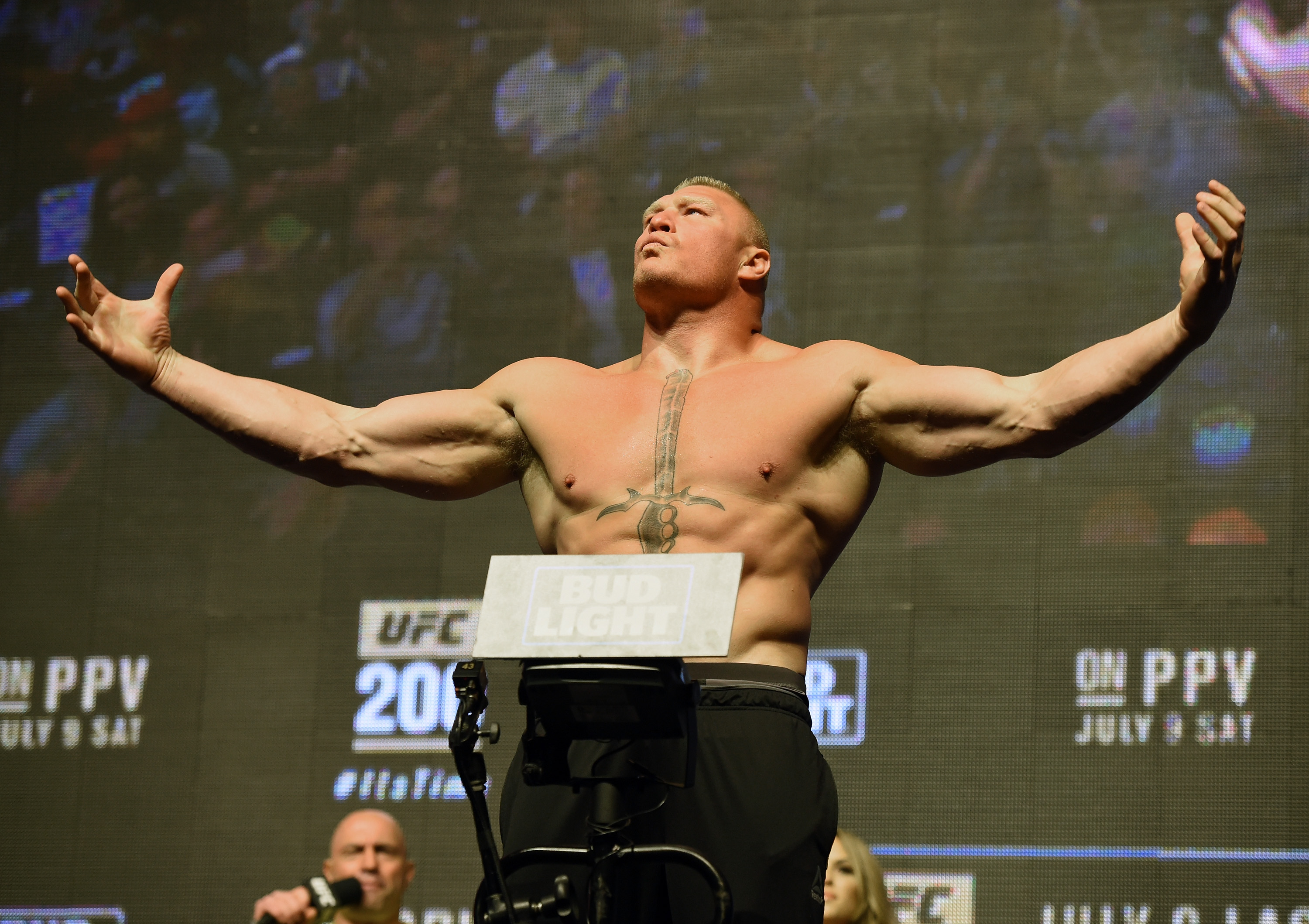 “Former WWE and UFC Champion Brock Lesnar is currently a free agent as his most recent deal with World Wrestling Entertainment has expired without the two sides locking in a new contract,” PWInsider confirmed.

Lesnar last appeared for WWE at WrestleMania 36 in April, when he lost the WWE Championship to Drew McIntyre.

Now that the 43-year-old is officially on the open market here are five options Lesnar can consider.

A fight with Fedor Emelianenko in Bellator

Scott Coke, president of Bellator MMA, has already expressed interest in signing Lesnar, which could set up a long awaited dream fight with heavyweight Fedor Emelianenko.

When asked by ESPN if he’s interested in signing Lesnar, Coke said, “Yes, if he’s truly available. Fedor vs. Brock is interesting. It’s the fight that never happened!” 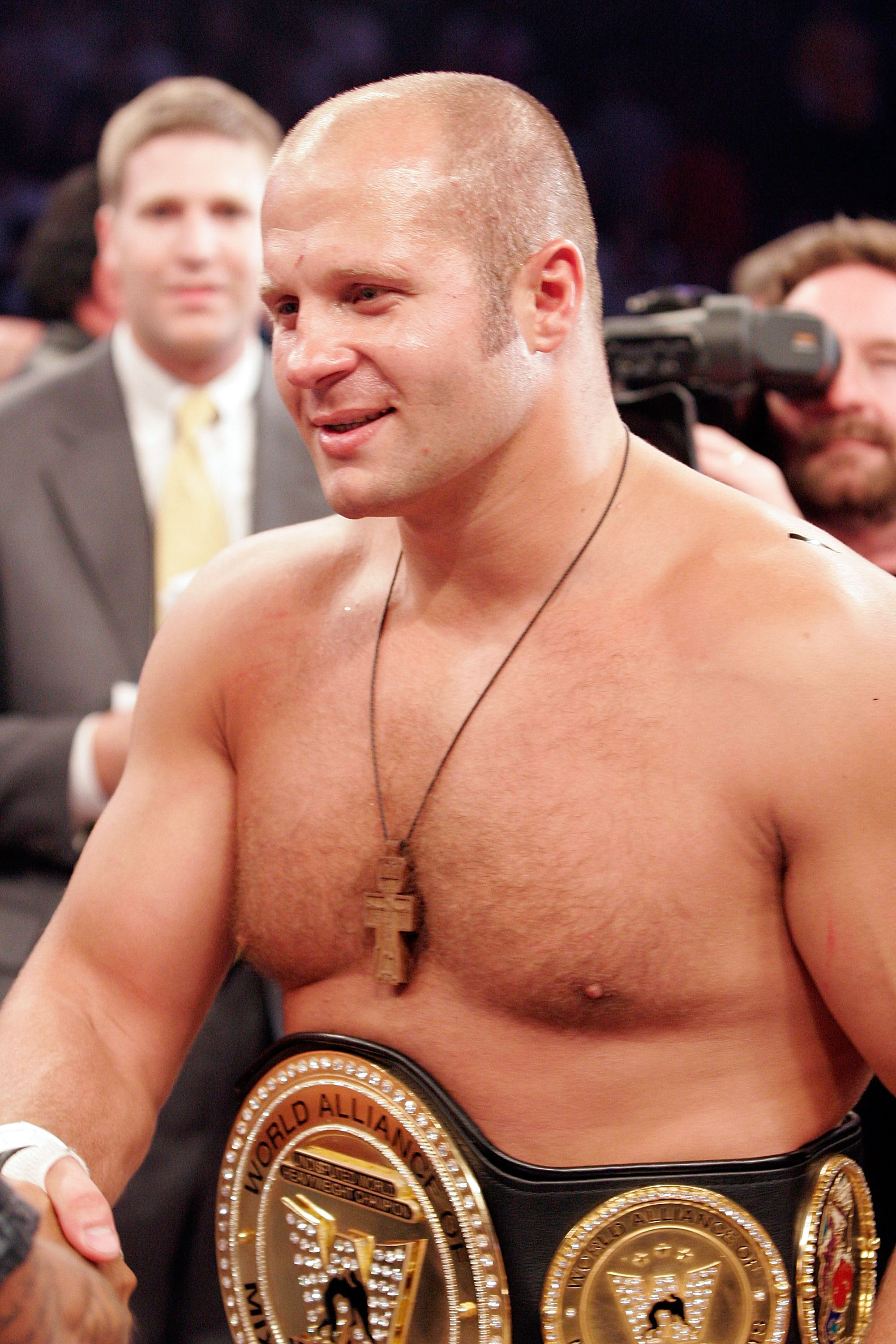 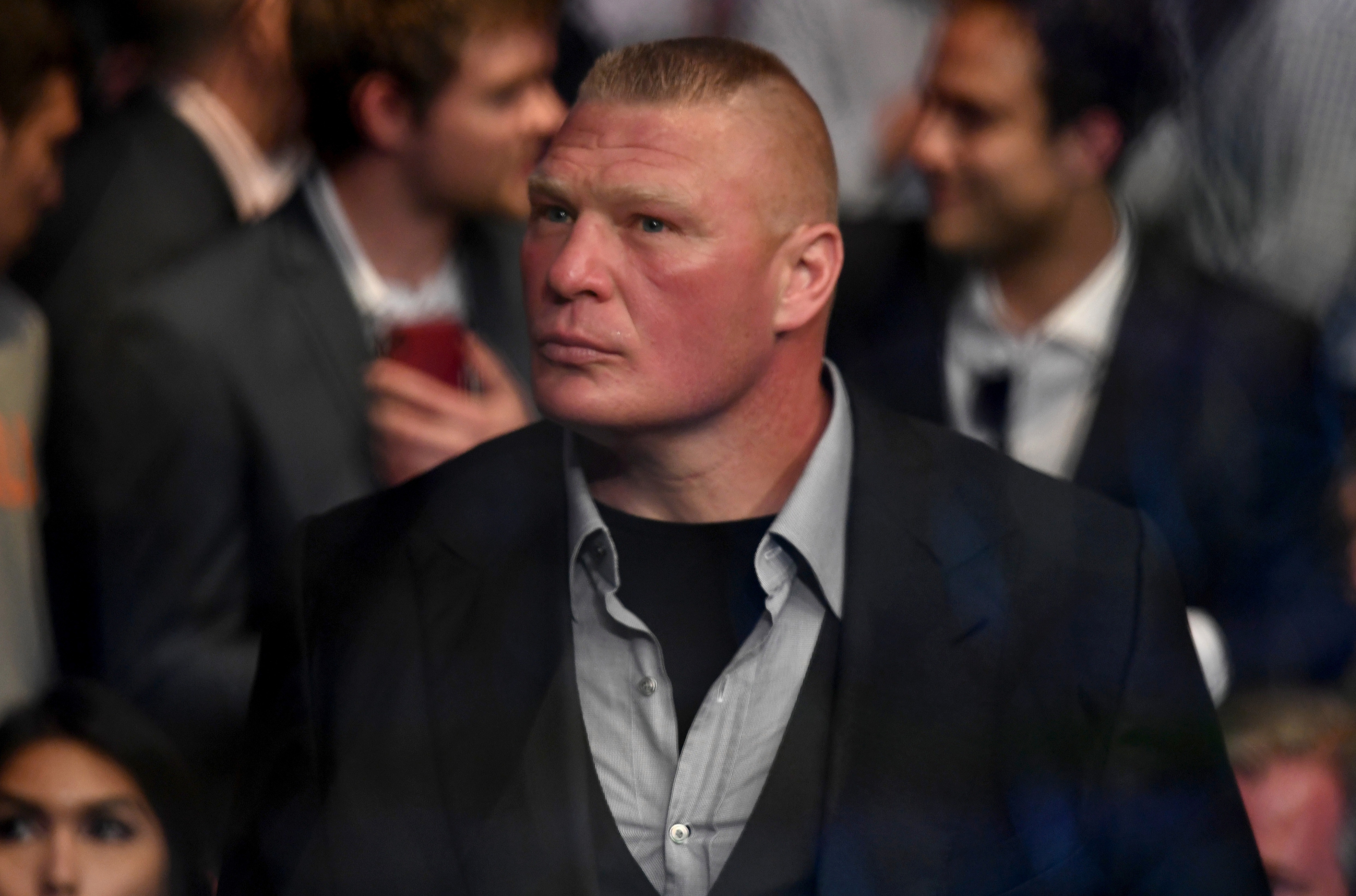 Bellator is owned by media giant Viacom so the money needed to offer Lesnar a lucrative deal would not be an issue.

Emelianenko is widely considered to be among the greatest mixed martial artists of all time and to have had the best ground-and-pound in the history of the sport.

The Russian holds a professional MMA record of 39 wins, 15 by way of knockout and six losses.

Emelianenko last fought Ryan Bader for the vacant Bellator Heavyweight World Championship in the main event at Bellator 214 on January 26, 2019.

He lost the fight via knockout just 35 seconds into the first round.

The 43-year-old has contemplated retirement, but on June 15, 2019 he signed a new exclusive, multi-fight contract with Bellator. 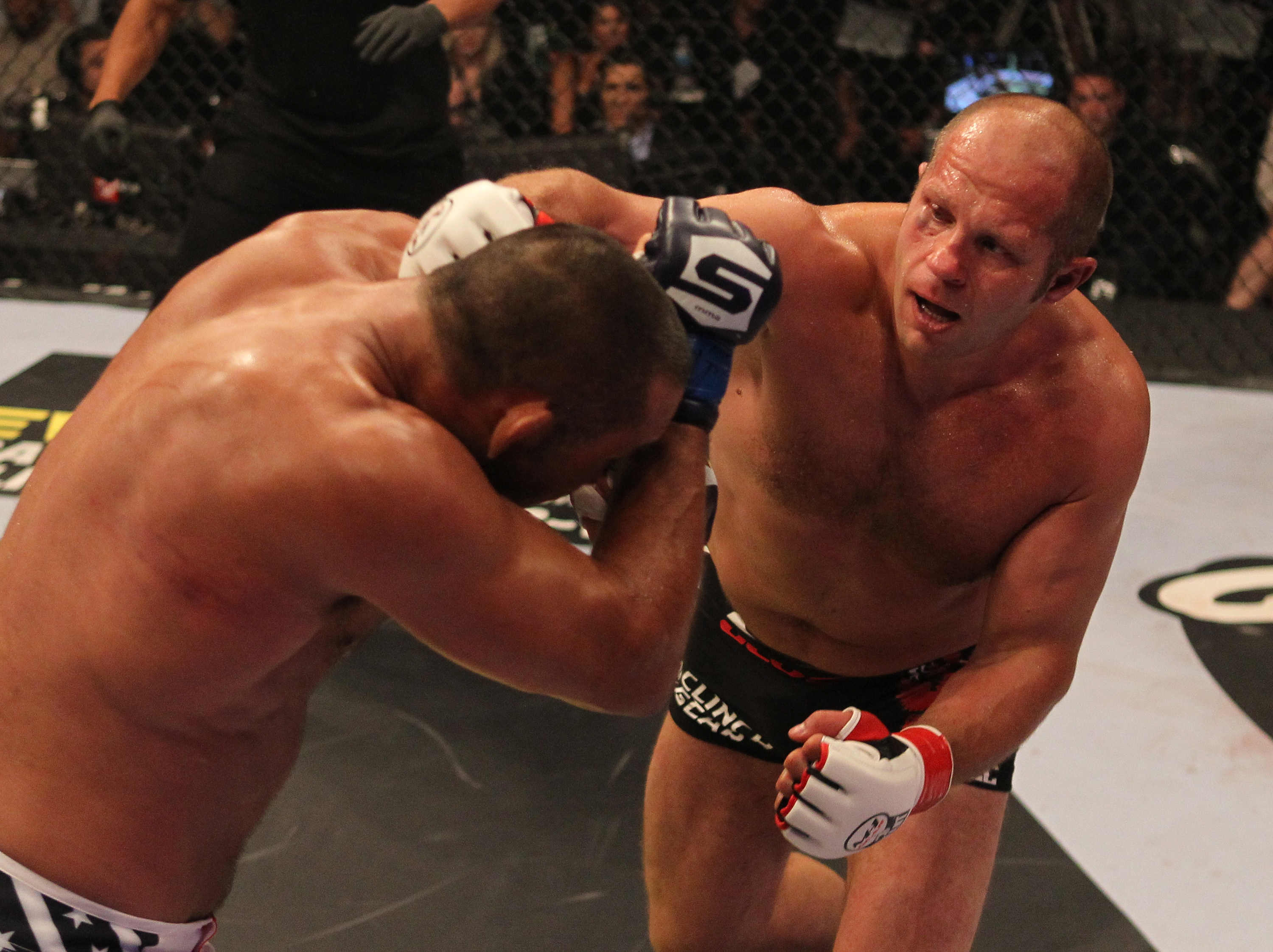 A heavyweight showdown between Lesnar and Emelianenko is a dream match MMA fans have been craving since 2012 when Dana White tried to lure Emelianenko out of retirement for a bout with Lesnar.

The dream match ultimately fell through, but the heavyweight fight could now finally happen.

UFC and a Fight Against Jon Jones

A return to the UFC could be on the horizon for The Beast Incarnate.

Lesnar last fought in the octagon in 2011, when he defeated Mark Hunt at UFC 200, although the victory was later overturned due to a failed test for banned substances.

Lesnar holds a professional UFC record of four wins and three losses. He won the UFC heavyweight championship in just his fourth pro fight when he finished Randy Couture in the second round at UFC 91.

In 2018, Lesnar teased a UFC return when he got into the cage with Daniel Cormier after his title victory, but the fight never came to fruition as Lesnar re-signed with the WWE. 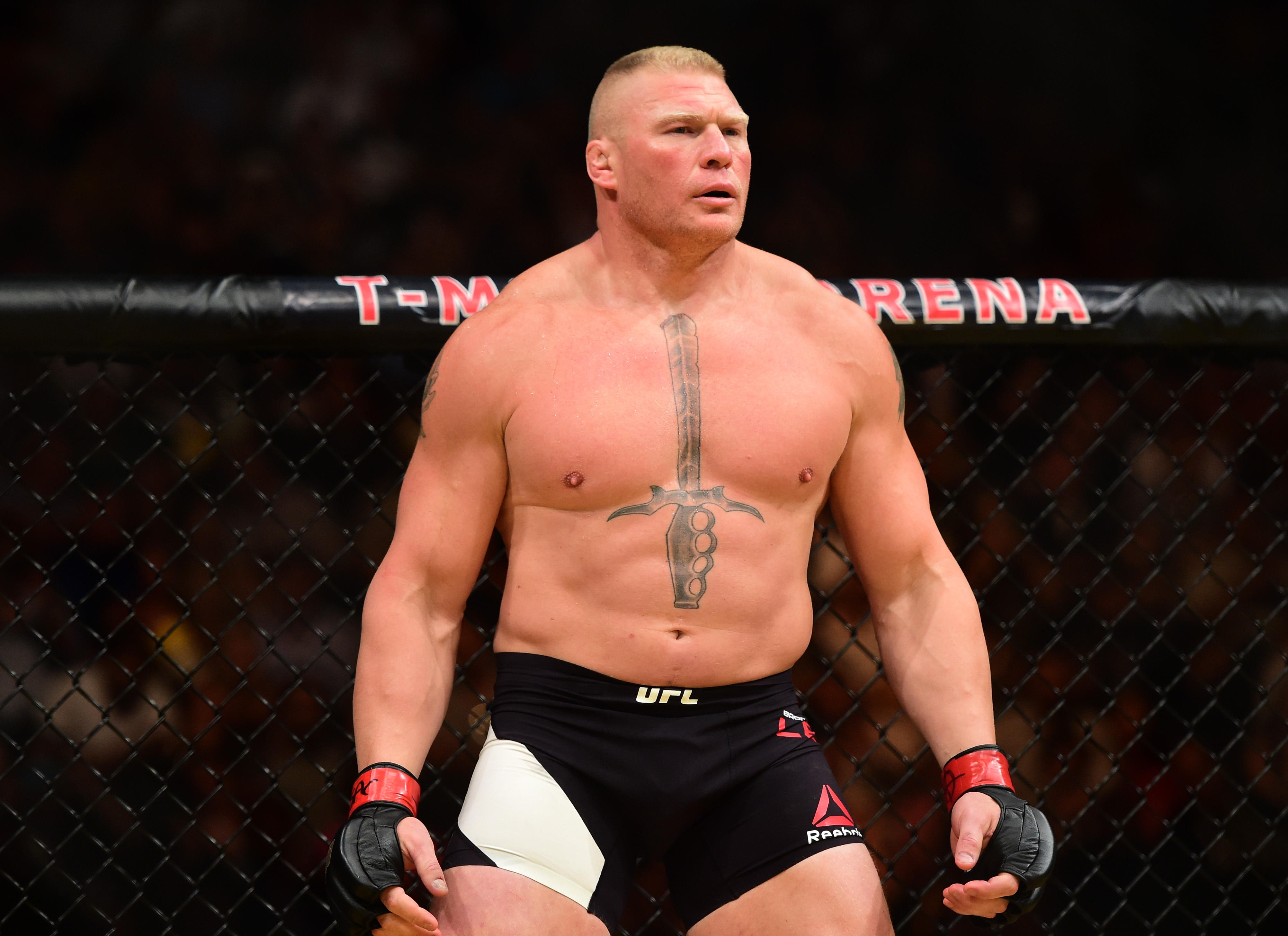 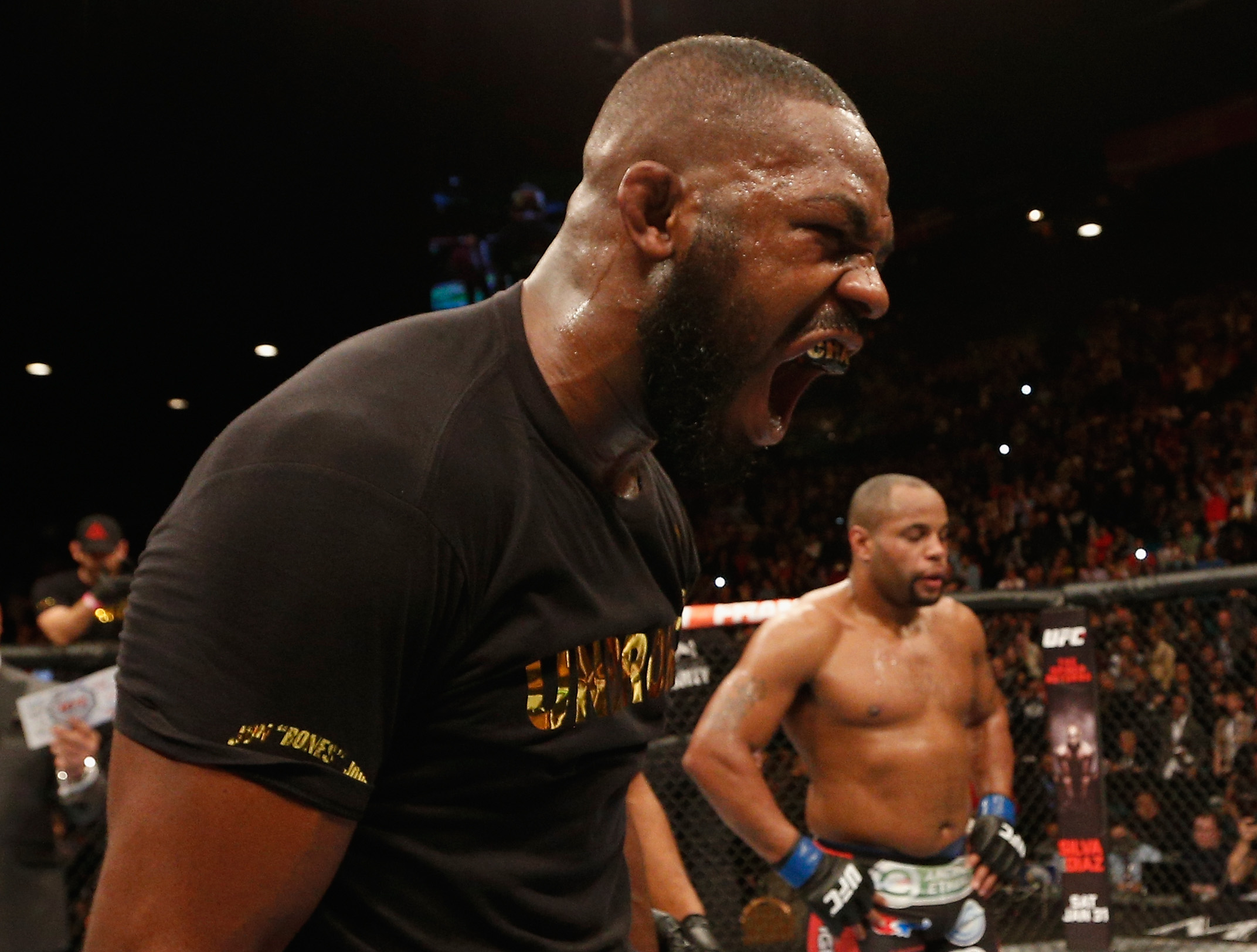 Jones previously claimed that “Brock is way too slow” and said he will “embarrass” the 43-year-old fighter.

“I know he said that he’s retired. The one fight he wants, and I don’t know if it’s ever going to happen, but he wants to go up against Jon Jones,” Angle said.

Last month, Jones relinquished the UFC light-heavyweight title in order to make the move up to the heavyweight division.

A Surprise Move to AEW

In what could be the ultimate middle finger to WWE Chairman Vince McMahon, Lesnar could make a shock move and sign with All Elite Wrestling (AEW).

AEW has quickly become a major player in the sports entertainment world, with the financial security of the Khan family and TNT’s desire to have a legitimate mainstream star on its programing.

Signing Lesnar could take the company to new heights.

With so many options on the table for Lesnar he could play it smart and sign a huge contract to return to the WWE.

Lesnar was WWE’s highest paid superstar before his contract expired and McMahon has been outspoken about how important The Beast Incarnate is to the company. 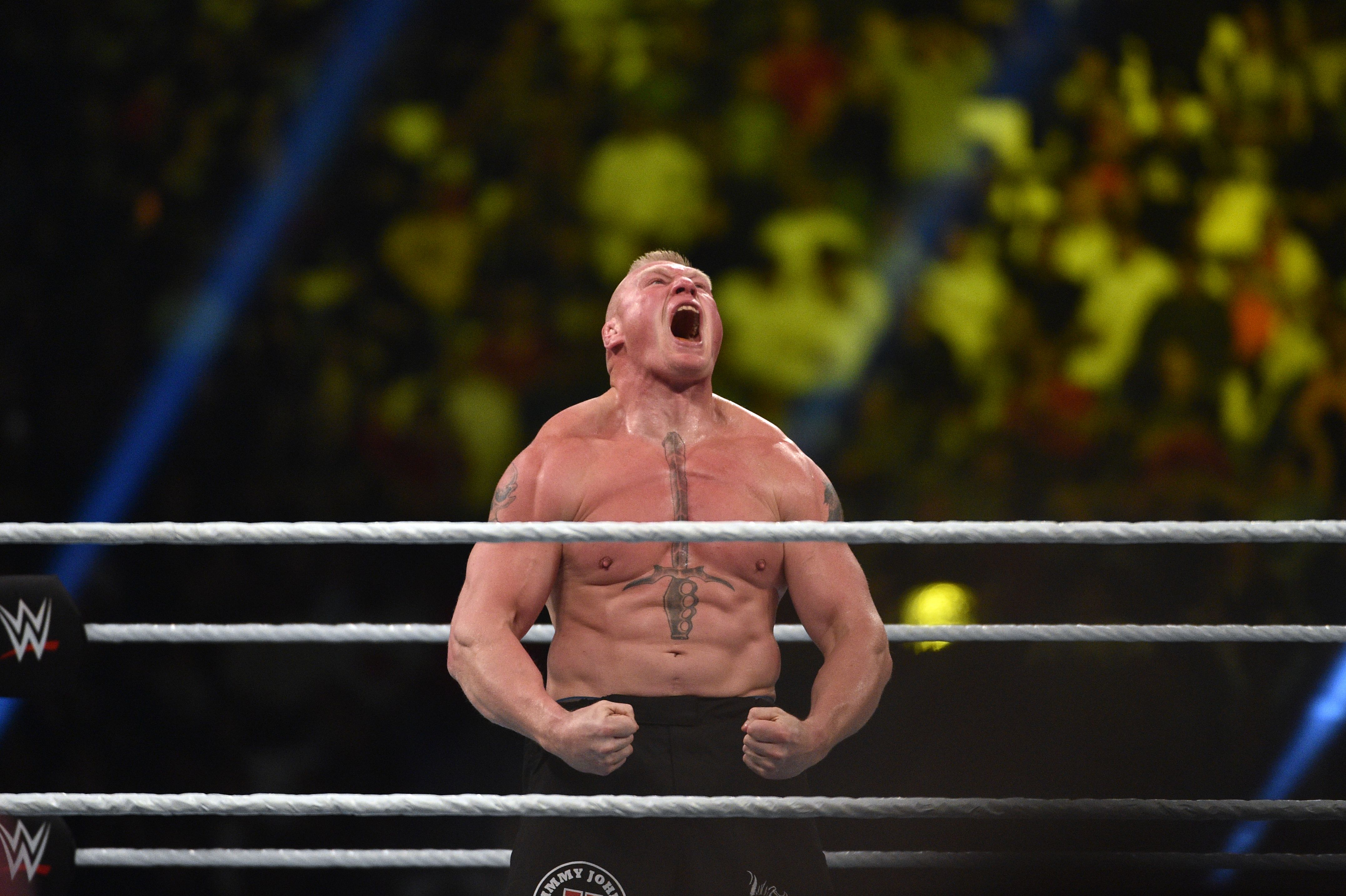 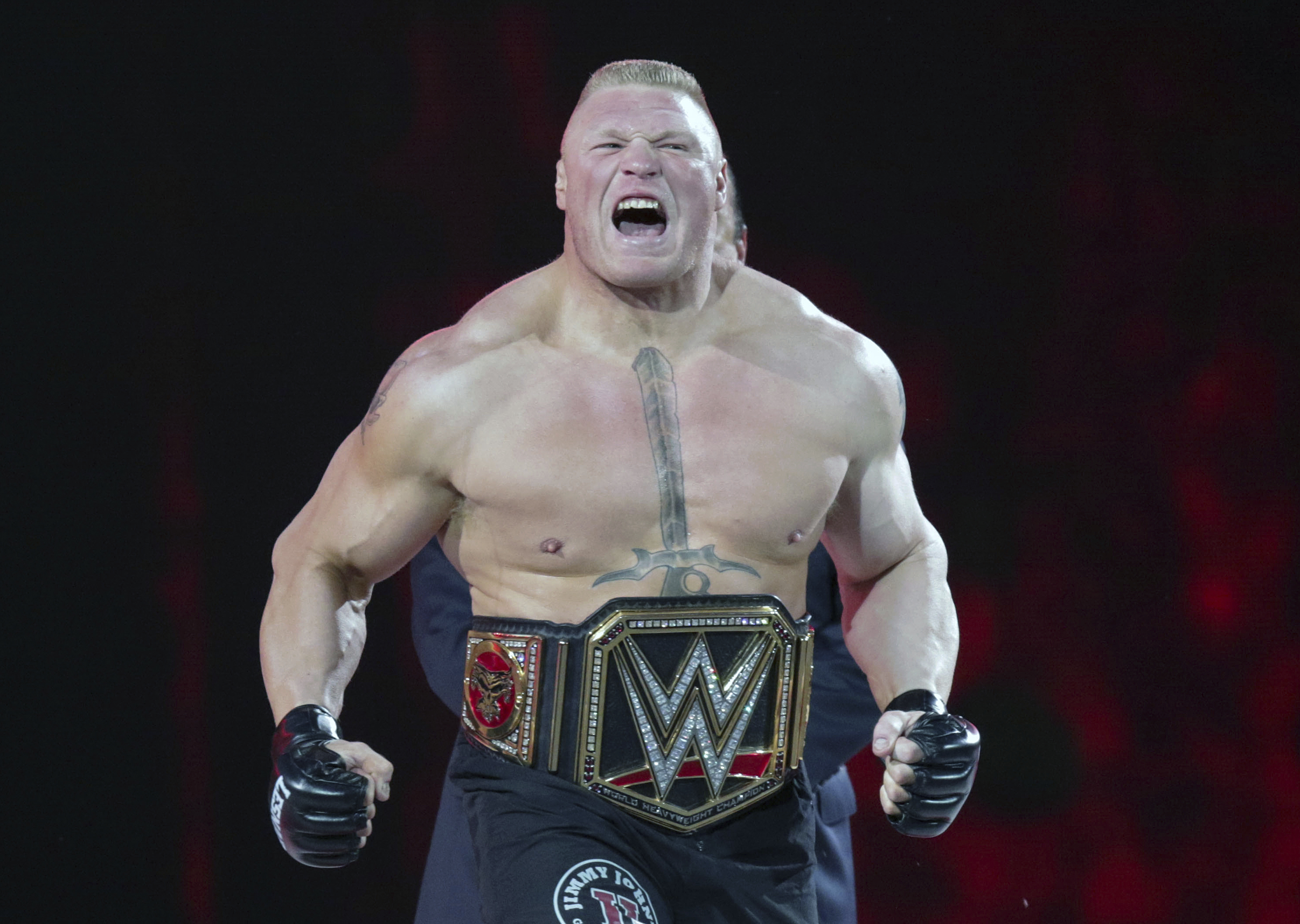 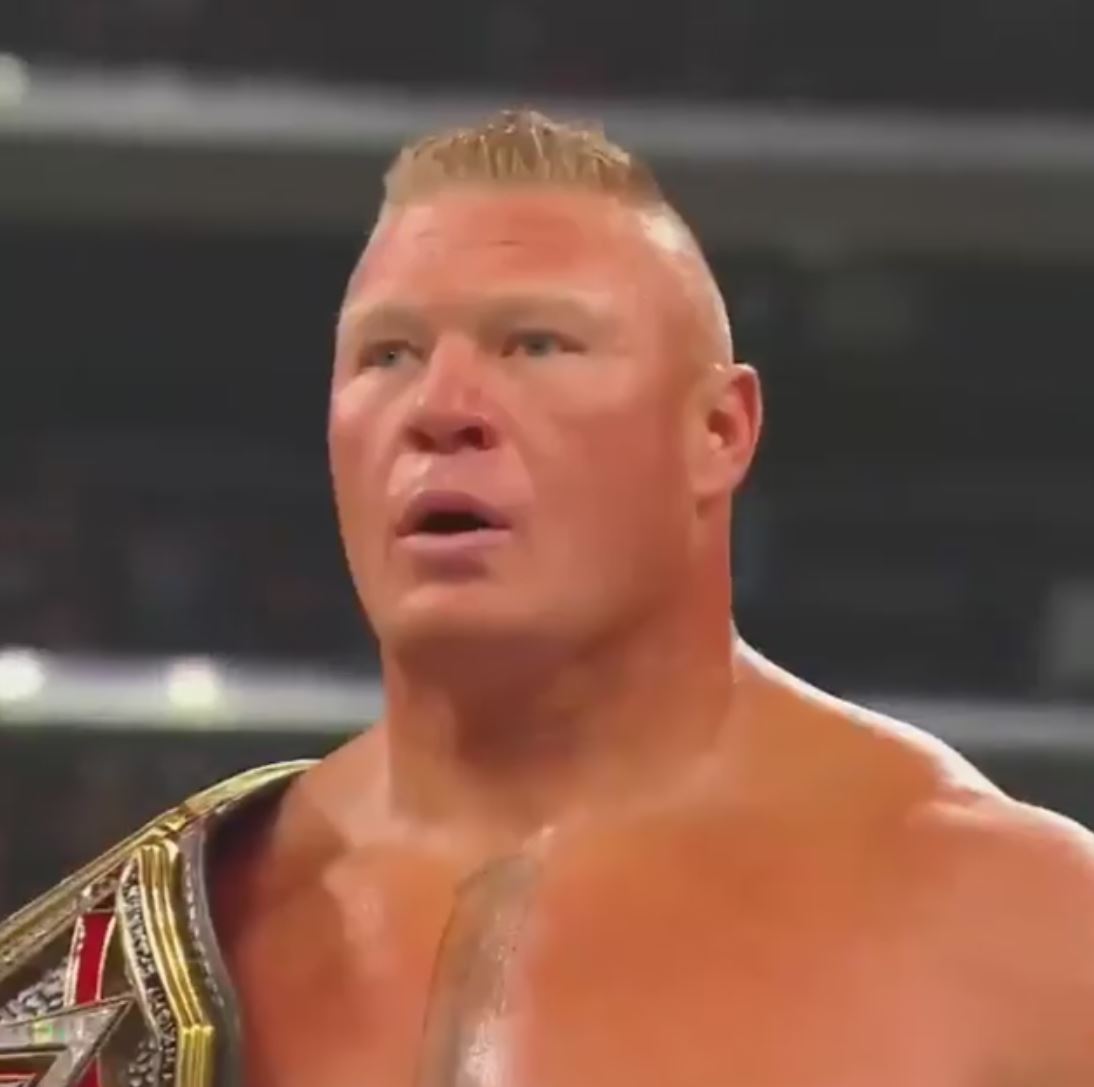 McMahon blamed WWE’s ratings downfall earlier this year on the absence of Lesnar, saying the Raw brand has suffered because, “We no longer have Brock Lesnar, obviously, but we have a new champion and a lot of new performers coming in.”

Lesnar made $10million yearly under his WWE contract, making him the highest paid wrestler in the company.

Perhaps choosing to stuff away his fighting gear and calling it a career isn’t a bad choice for The Beast. 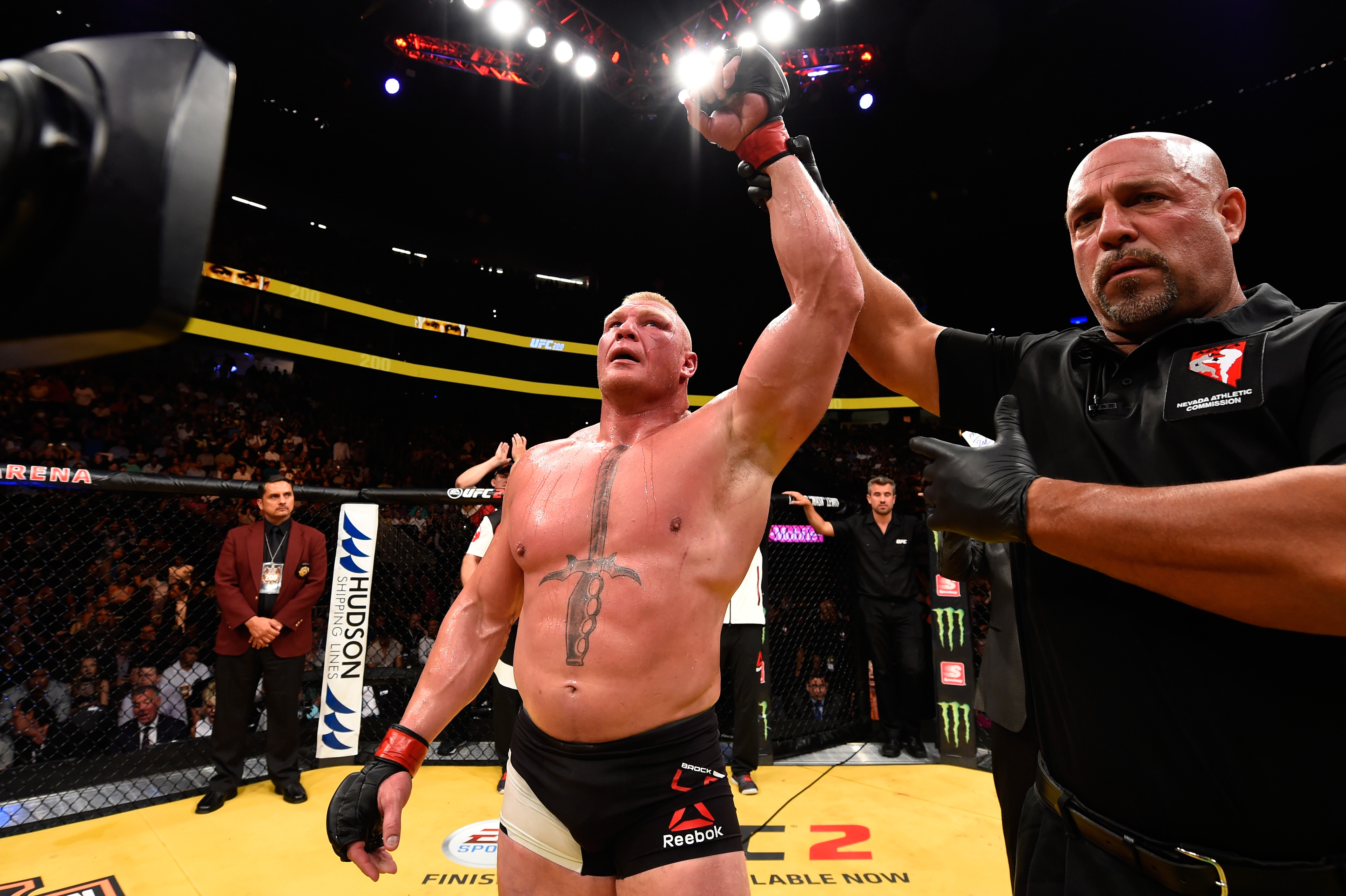 Lesnar was also named a defensive tackle for the Minnesota Vikings, but was cut before the start of the 2004 season.

As a successful WWE and UFC star, Lesnar has amassed a $28million net worth throughout his career.