Olympic gold medal-winning sailor Mathew Belcher put his birthday celebrations on hold after being one of the first Australian athletes officially named on the Tokyo team for 2020.

Belcher will be shooting for a third straight Olympic medal when he teams with Will Ryan for the 470 class while Matt Wearn has been nominated as Australia's representative in the Laser category. 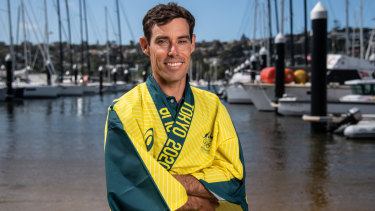 Mathew Belcher is one of the first athletes nominated for Australia’s 2020 Olympic Games team.Credit:AAP

"It's amazing to be the first athletes selected for Tokyo 2020," said Belcher on his 37th birthday. "To go to even one Olympics is so special, to get a chance at a third Games is an incredible feeling.

"It's great to be able to share the experience again with Will. Historically there’s been a crew change between each Games in 470, so I’m excited to go back to the Olympics with Will. We thrive in pressure situations and have such a strong relationship – now it's up to us to do everything we can to go one better than Rio.

"The Olympic announcement is really special – presents from the kids can wait for this afternoon. It's a balance between family and sport and celebrating a birthday as part of an Olympic announcement sums that up perfectly. The family is 100 per cent behind me and it’s great for my kids to see us in the Olympic arena."

Wearn, 23, is the world's No.1 ranked Laser sailor and will be making his Games debut in Tokyo after the unveiling at Middle Harbour Yacht Club in Sydney on Friday.

"I’m just ecstatic," Wearn said. "After I got the call that I was selected, I just sat down in silence for a minute and let it soak in. The excitement really kicked in and I felt like jumping around the house.

"I'm so excited to represent Australia at an Olympics – to be rubbing shoulders with incredible athletes that Australia will have in Tokyo across so many sports is crazy to think about. It doesn’t feel 100 per cent real yet, still feels like a bit of a dream."

Australia's sailors have won six gold medals at the past three Olympic Games and won their first-ever gold at the 1964 Games in Tokyo. Enoshima Harbor will also host the sailing regatta next year.

"These aren't just sailors, they're world class sailors," Australian Olympic Committee chief executive officer Matt Carroll said. "They haven't got there by chance, there's been hard yards and hard work and we're thrilled to have them on our team. The sailors themselves place the expectations, but the opportunity is there to do really well."