Former Rep. Chris Collins was sentenced Friday to 26 months in prison for his role in an insider-trading scheme, which he admitted to last year after denying any wrongdoing during his successful 2018 re-election campaign.

The sentence marked the latest in a stunning fall for the Republican who served seven years in Congress and was perhaps best known for being the first sitting federal lawmaker to endorse President Donald Trump’s 2016 presidential run.

He admitted to tipping off his son to pending news about a publicly traded company, allowing the younger Collins and seven others to avoid $700,000 in losses by selling their stock before the news became public and the value tanked. 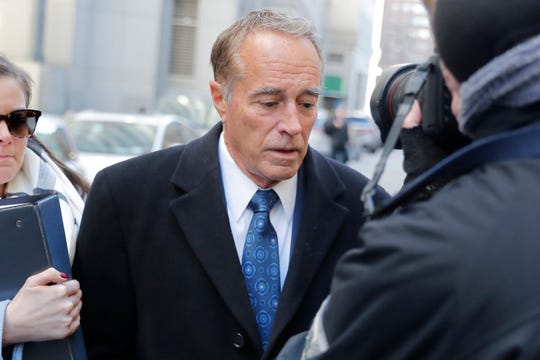 Collins’ guilty plea was connected to his role as a major investor in Innate Immunotherapeutics Ltd., an Australian company that had been developing a drug to treat a rare form of multiple sclerosis.

A member of the company’s board of directors, Collins received word that the drug had failed its clinical trial while attending a party for congressional members on the White House lawn.

In a scene captured by a CBS news camera, the congressman then frantically called his son, Cameron, a fellow Innate investor, to share the bad news. Cameron Collins and six others then sold off their stock, though Chris Collins was unable to.

Later, when the FBI interviewed Chris Collins about the phone call in April 2018, he lied about it, leading to the false-statement plea.

Cameron Collins, 27, also pleaded guilty to his role in the scheme, as did his fiancée’s father, Stephen Zarsky, one of the other Innate investors.

Both are due for sentencing next week.

Chris Collins was first elected to Congress in 2012, defeating then-Rep. Kathy Hochul, a Democrat, in a race for the state’s most Republican-heavy seat that includes the Buffalo and Rochester suburbs and the mostly rural areas in between.

He was re-elected three times, including in 2018 after he had been indicted on the federal charges.

At the time of his latest re-election, Collins had repeatedly stated his innocence in public, vowing to fight the charges.

That changed last year, when he changed his not-guilty plea and admitted to his role in the scheme. He resigned from office at the same time, setting up an expected April 28 special election to fill the remainder of his term, which runs through the end of the year.

Collins addressed the court Friday before Broderick’s sentence was handed down, telling the judge he “violated (his) core values” and let his former congressional colleagues and President Trump down.

“I am standing here, probably the last time I will do anything in public,” Collins said, according to the Inner City Press. “I left Buffalo. I cannot face my constituents. People feel sorry for me. They shouldn’t. I did what I did.”

Prior to Congress, Collins served as Erie County executive from 2008 through 2011. Before that, he was president and CEO of the Nuttall Gear Corp. before selling the company in 1997.

Since his guilty plea, Collins has moved to Florida.

The judge recommended Collins’ sentence be served at FCP Pensacola, a minimum-security prison on the Florida panhandle.

He will also serve a year of supervised release following his prison sentence.

Jon Campbell is a New York state government reporter for the USA TODAY Network. He can be reached at [email protected] or on Twitter at @JonCampbellGAN.