“Making myself accessible now as a role model, as a black sportswoman, is really important. If it wasn’t for me seeing those athletes in that environment, I probably wouldn’t have kept striving for it.”

Serena Guthrie, the Vitality Roses co-captain, is acutely aware of the position that she’s in, as a netballer and as a black sportswoman.

The mid-courter made her international debut at the age of 18 and has been integral to the national team’s success ever since. She led England during a home Vitality Netball World Cup in 2019 and won gold with the team at the 2018 Commonwealth Games.

“When you say, what was my inspiration? It was what was around me at the time,” Guthrie tells Camilla Buchanan in the ‘Netball: Black Roses’ documentary on Sky Sports.

“If I could see it, then for me it’s realistic and it’s something that I can do.

“That’s where the environments in which young athletes are brought up in are so important, because if you can physically see what people are doing, it makes you think that if they can do it, then maybe so can I.” 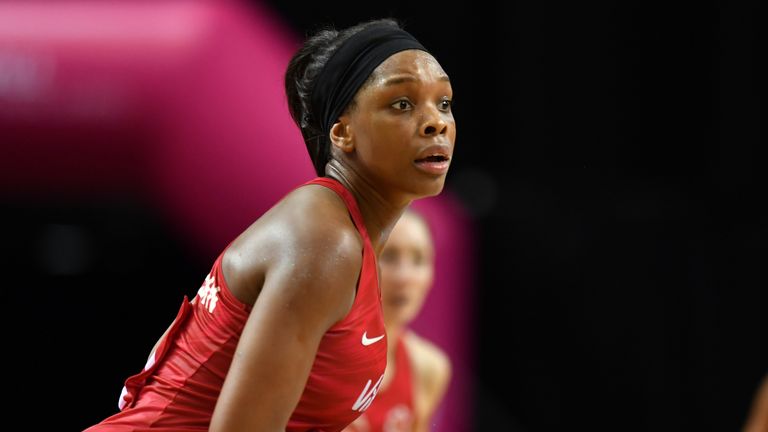 If you can see it, you can believe it and you can achieve it. I think the more black representation we have across sport, not necessarily just sport in all industries, we will be the leaders of tomorrow.

Another current member of the Roses squad, Jodie Gibson, also recalls the importance of those who went before her in an England dress, and shared how those women motivated her to succeed.

“I used to sit up at night and watch netball,” Gibson said. “It used to be on about 3am in the morning and I used to get so excited when I saw the likes of Pamela Cookey, Amanda Newton, Sonia Mkoloma on court just doing their thing.

“I’ll never forget going to the Manchester Arena to see my first ever game of netball and just hearing the roar of Sonia on that court, demanding what she wanted from her players.

“I remember thinking that I want to be like that, and I wanted to play like her on that court.” It makes me proud to be black and an athlete. When I was a little girl, watching TV and I saw Geva [Mentor], I wanted to be like her. It’s nice for people that might share the same skin colour as me, to look up on TV and see representation in sport, see us playing professional sport, and actually aspire to be like that.

Two of the role models that Gibson cites – Newton and Mkoloma – joined Buchanan for the ‘Netball: Black Roses’ documentary to share more about their own playing days.

Newton first represented England in 1996 and went on to lead the national side as captain, while Mkoloma’s first cap arrived in 1999. Between them, they have over 200 international appearances and both women’s international careers were more than a decade in length.

Newton and Mkoloma are widely known to have been two of England’s most formidable Roses, and when they each arrived in the national set-up, they had an ardent desire to drive change and move the sport forwards. 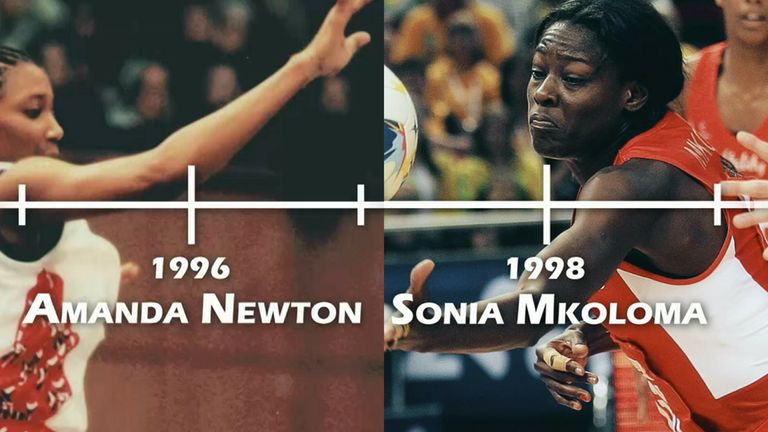 “I think it was about making England Netball at the time, more aware of the diversity that was within their team,” Mkoloma said. “I think coming into it in the early days, it [that awareness] wasn’t there.

“There was this platform of just having plain, boiled chicken because that’s what everyone eats and we’ve come in as West Indian girls saying that we needed salt and pepper, seasoning and that we didn’t agree to this.

“Those were little things and even with the white girls who were in the team, it was about teaching them about our culture as well. A lot of them didn’t know about our culture, our hair for example.

“I used to have cut hair, shaved hair, braids, a weave… this and that going on. They didn’t know about this. I’m not that person who someone can come up to and say, can I touch your hair?

“If they did, I’d say that they couldn’t do or say that. I was never afraid to stick up for myself or if I felt someone else was being hard done by because of their culture, background, or anything like that.”

Newton shared the same determination as Mkoloma in terms of pulling people up on their behaviour. She wasn’t, and isn’t, someone to let things slide.

“I will always speak up for something, if something is not OK,” she added.

“You’re offending me, but there might be someone else who isn’t as strong as me who is also offended, and you don’t know what might happen after that. They might not want to be around that environment, they might withdraw themselves from it. So, we did challenge stuff.”

Voices and having your voice heard, is something that continues to be important to the Roses who have followed in the footsteps of Newton and Mkoloma.

During England’s Test series in New Zealand last year, the squad made their own stance clear on court as they knelt together as one against racism and social injustice. “We wanted to do something to show our support,” Guthrie said.

“We hadn’t been on TV for a while because of COVID, so we wanted to make sure that we were sending the right messages to say that we stand for something and it’s not accepted in netball either.”

At the time, Laura Malcolm had spoken extremely powerfully about her own experiences of microaggressions she’d experienced during her life. She also candidly spoke about thoughts she had had as a young girl about wanting to change the colour of her skin.

From a young age I really wanted to be white and I didn’t really understand at that age why I wanted to be white. I was quite sad about my hair, I used to cry about it and I spoke about this with my brother not too long ago actually. You just think [now], that’s crazy – how I felt. I probably at the time didn’t know why I felt like that.

When it came to England’s match day in New Zealand, Malcolm was one of the players who drove England’s actions as they took a stand and united on court.

That show of unity was replicated again when they played their first match back on English soil, in Loughborough against the Vitality Netball Superleague All Stars.

“We knew that it was a moment where we had to make sure that we used our voices as players to represent something that was important to us,” Malcolm said about taking a knee in New Zealand.

The Sky Sports documentary ‘Netball: Black Roses’ is now available to watch On Demand via Sky and NOW TV.