And the tough Englishman even praised the fleet-footed fullback for doing his best to cope with his first full season in the NRL in the all-important position of fullback. 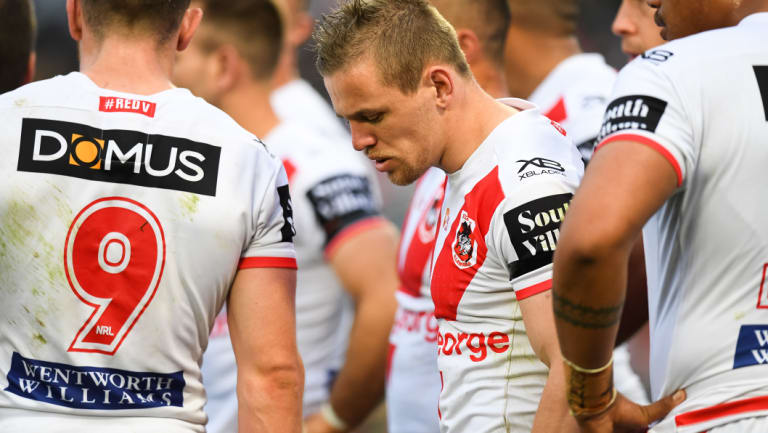 Blowing off steam: James Graham and Matt Dufty, above, exchanged words after a heavy loss to the Bulldogs.

Dufty's form had started to dip in the run home to the finals before he ran for more than 200m, which included a long-range try against Newcastle last week.

The No.1 will prove a handful against Brisbane on Sunday, especially when running off the returning Gareth Widdop.

Jack de Belin also remains hopeful of playing and will test out his dodgy ankle on Friday after he missed Thursday's scheduled run.

Dufty told Fairfax Media last weekend his reported run-in with Graham after the Canterbury loss a week earlier had prompted his parents to seek a ''please explain''.

He had laughed at something teammate Nene Macdonald said while they sat in the ice baths after Canterbury's 38-0 drubbing of the Dragons – and Graham, who takes losses to heart, had the wrong idea.

Graham said on Thursday: "Me and Duff have a good relationship, and like most relationships, things get heated, and that means there's passion.

"If there's no confrontation in most personal relationships, then you're probably in the wrong relationship.

"It's OK to disagree with people. There was no need to patch up. We had a little bit of difference of thought on a few things.

"Before we left the change-rooms we were hugging. And as you would have seen last week I was delighted when he scored.

"People get old in this game really quickly, don't they?

"You go from playing a few games last year to the starting fullback in your first [full] year. And because you play so well, people expect that level from you every week. Realistically, that won't happen.

"It's very difficult to perform at that level every week.

"At first Duff was probably a bit of an unknown, and now teams are giving him more focus. I know I would if I was playing against us.

"I'd go, 'Let's try an shut this guy down' because of how devastating everyone knows he can be.''

While Graham praised Dufty, he was happy to take a few pot shots at his fellow Englishman Widdop, who missed the final three rounds with a shoulder injury.

"He's a bit of a slug in the conditioning drills, so nothing has changed there,'' Graham quipped.

"But he's actually said his shoulder is stronger that it has been and he's benching more than he ever has.

"Maybe three weeks of actually training hard has done him the world of good. But I am being serious, he's benching more than he has done and had some personal bests in the gym.

"He's a class act, he's up there with the best No. 6s in this competition, and we've seen how silky he can be. He puts that finishing touch on [sets] and he's tough as well.

"I'm really pleased he's back. He's a highly influential player in this group.''

Dufty said last weekend of Graham: "If someone was going to go off at me it was 'Jamma'.

"He's a competitor and the heart of this team. I got on the phone to him later that night, and we made up and had breakfast the next day.

"My dad called and asked if this story was true, and I said, 'There may be a bit of GST on it'.

"Even my mum called when I was in Cronulla for a promo and asked what was happening. I said, 'Jamma is here, I'll put him on the phone'.