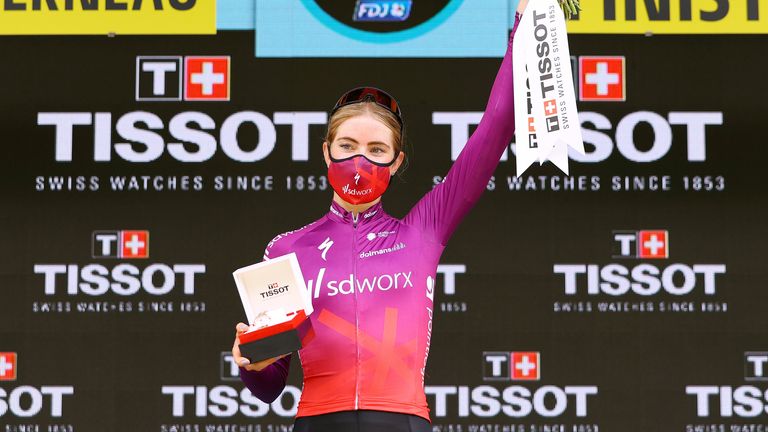 Vollering’s SD Worx team played their cards well as Anna van der Breggen set up the win for her team-mate in a repeat of April’s Liege-Bastogne-Liege, leading a select group to the top of the finishing climb.

Though Vos was the first to come off her fellow Dutchwoman’s wheel, Vollering had the power to come past, as did Cecilie Ludwig as she snatched second place at the end of the 107km race from Brest.

Lizzie Deignan, who began the day as the defending champion, had to settle for ninth place after being distanced on the last of four ascents of the Cote de la Fosse aux Loups, coming home in a group four seconds behind the leaders.

But the champagne went to SD Worx, with Vollering owing Van Der Breggen a big debt of gratitude for the way she set it up.

The world champion, 31, plans to retire at the end of the season and become a sports director but was effectively already doing the job for her 24-year-old team-mate in the finale, rolling home in fourth with a big grin on her face.

“I was not expecting that from today,” Vollering said. “It was an awesome race.

“She (Van Der Breggen) did it again. It almost went wrong because Vos was going all the way to the right and I was a little bit stuck but Anna made the speed to force Marianne to go and I could go into Marianne’s slipstream and come over her which was really cool.

“It gives me much confidence for the future.”

What stands to be the final edition of La Course, set to be replaced by an eight-day Tour de France Femmes from next summer, took the peloton the short distance from Brest to Landerneau.

There they tackled four laps of a circuit characterised by the finishing climb, three kilometres at a gradient 5.7 per cent but including ramps reaching 14 per cent.

Deignan had stuck to Van Der Breggen’s wheel for much of the race but could not hang with the leaders the last time up the climb as Tiffany Cromwell began the attacks.

“Today was just a bad day from the start to the finish,” Deignan said. “I felt terrible so I knew I didn’t have the finish like the girls in front.

“I knew the form was there but today was just such a bad day I couldn’t suffer enough to be there, it was frustrating.”

With three Dutchwomen in the top four despite the absence of WorldTour leader Annemiek Van Vleuten, it was also an ominous sign for Deignan and anybody else heading into the Olympic road race next month.