If only they could make me the media and communications director of Tennis Australia for a day, this is the letter I would send: 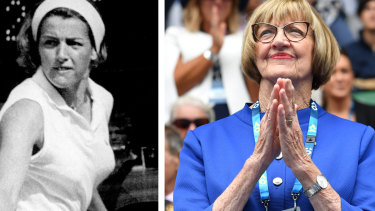 On behalf of Tennis Australia, I note with interest your recent comments concerning the approach of the 50th anniversary of your grand slam, and your desire that you be accorded the same kind of public celebration we gave to Rod Laver for his own recent 50th anniversary, to wit: "They brought Rod in from America. If they think I’m just going to turn up, I don’t think that is right. I think I should be invited. I would hope they would pay my way to come like they paid for his, and honour me. If they are not going to do that, I don’t really want to come."

"I think Tennis Australia should sit and talk with me. They have never phoned me. Nobody has spoken to me directly about it. I think they would rather not confront it."

Mrs Court, this is a rather difficult situation, as you will appreciate. Once again, we congratulate you on your many tennis achievements – more indeed, than any female player, ever. But we are, frankly, bemused by any suggestion that we haven’t honoured you. You’d surely agree the Margaret Court Arena is an extraordinary honour? And you would agree that our resistance – so far – against all calls to change the name because of your intensely unpleasant homophobic remarks, is a sign of our enduring goodwill? 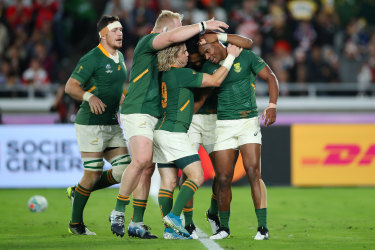 The South Africans celebrated after prevailing in the Rugby World Cup final against England.Credit:Getty Images

In the case of the Springboks at the World Cup final though, it was the South African halfback Faf de Klerk who unveiled dozens of “Bok’s kicks”. Don’t worry about getting it to the back-line, just keep doing endless small kicks about 25 metres down-field to the opposing winger right by the sideline. As you rush up, the side-line cuts off one possible direction for the winger to go, so if you frame your angles right you can smash into him with his back to the wall and often either push him over the sideline or force an error. Repeat, dozens of times, and win the game!

And they did. It was deadly dull rugby, but effective – particularly against a team that would have murdered them in open play. England just never got into the match, and never looked like winning.

Beyond such churlish comments on their triumph however, the true highlight of the match came afterwards when the Springbok captain Siya Kolisi spoke – just as he was about to be the first black man to lift the Cup in triumph, as the winning captain.

Such poise! Such humility! Such charisma!

This was a bloke born the day before South Africa’s wretched Apartheid laws were repealed, now captaining his country to a glorious victory, with all of South Africa – black and white – right behind him. It was something unthinkable during the Apartheid era, and stunning proof of just how far that country has come in the last quarter-century.

And Kolisi is a man all of rugby can be proud of.

TFF has already noted horse-racing’s extraordinarily blasé attitude to cheating, how proven perpetrators tend to be suspended for just short periods for things which would see them banned for perpetuity in other sports. The same blasé attitude was on display in the Melbourne Cup. The jockey who came second, Michael Walker, riding Prince of Arran, was proven to have whipped his horse with seven lashes more than the allowable amount. He was fined $10,000 for his trouble and banned for seven-meetings.

“Can you imagine a swimmer wearing a banned super suit and winning a Gold Medal? Or an NRL team breaching the salary cap and winning the Premiership? Perhaps a golfer using an illegal broomstick putter and winning the US Masters? Or the Wallabies winning the Webb Ellis Cup with 17 players on the field?

Yet, as a jockey, you can break the whip rule and still win a Melbourne Cup together with all the prizemoney and kudos that brings.

The obvious solution, for starters, is to ban the whip outright.

James Maloney, settling in with the Catalans Dragons: "French is a bit of a challenge, my wife and I went to the pharmacy to pick up a flu remedy and I think we ended up with a packet of condoms, which is a bit late for us with four kids."

Greg Norman, likening the hitting a golf ball – and I am not making this up – to being "as good as having an orgasm": "I’m deadly serious, there’s an absolute rush. The rotation of your body, the timing, the feel, the sound, the end results, the visual side of the ball taking off from the club face … it’s just such a sensual feeling." Someone will have to tell him the true joys of orgasms that are not self-imposed … 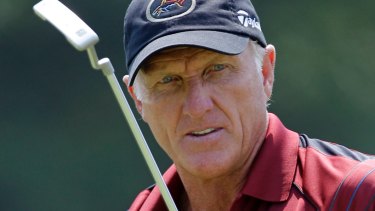 Greg Norman likened the hitting a golf ball to being “as good as having an orgasm”.Credit:AP

Greg Norman: "Very few people know this: when Tiger won the Masters this year, I wrote him a handwritten note and drove down my road, maybe a quarter of a mile, and hand-delivered it to his guard at his gate. ‘I said, “Hey, this is Greg Norman here. I’ve got a note for Tiger – can you please hand-deliver it to him?'" Well, I never heard a word back from the guy." It’s all right Tiger, you can come out from behind the couch. Look, we know what it’s like, but it’s OK, he’s gone now.

Fiona Crawford the co-author of Never Say Die: The Hundred-Year Overnight Success of Australian Women’s Football, on the historic pay deal which sees the Matildas get equal freight to the Socceroos: "At last they will be properly paid for playing rather than paying for the privilege of playing."

Eddie Jones after the World Cup final: "We weren’t good enough and we got beaten by a better team." 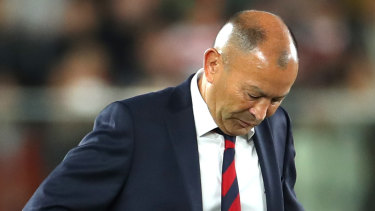 The Rugby World Cup final was a game to forget for England coach Eddie Jones.Credit:Getty Images

Headline in the Guardian following the World Cup win: "England were as miserable as the weather."

South African coach Rassie Erasmus: "In South Africa [pressure] is not having a job, having a close relative who is murdered. Rugby should not create pressure, it should create hope. We have a privilege, not a burden."

Francois Pienaar on this Springbok win against the one he captained in 1995: "This is bigger. It is a transformed team with 58 million people watching in South Africa, all races wearing green, which wouldn't have happened in my time."

South African captain Siya Kolisi: "We have so many problems in our country but a team like this, we come from different backgrounds, different races but we came together with one goal and we wanted to achieve it. I really hope we’ve done that for South Africa. Just shows that we can pull together if we want to achieve something."

Cathy Shabalala, a 25-year-old South African on the World Cup win: “As South Africans, this feels so great. We are not always like this. And the bonus is we have played against our old colonisers and we have beaten them! We have killed them!”

Ash Barty, after winning the Players Championship in China: “First and foremost, thank you to the shitty … ah, the city of Shenzhen.”

Twitter account of the MCG replying to claims it’s the fun police: “Hi Daniel, we can confirm there were no issues associated with the building of the ‘bucket pyramid’ at tonight’s T20 International.”

Wellington Phoenix player Louis Fenton not a fan of VAR: “I thought 100 per cent no pen. It didn’t f—ing hit my hand. It’s f—ed.”

Jason Taumalolo rated Tonga's sensational victory over Australia as a career highlight, topping the 2015 premiership he won with North Queensland: "That’s right up there alongside the premiership. I reckon it's probably one [better]. That was probably my biggest game. This is the highlight of my career."

Mal Meninga after losing to Tonga: "Anytime the Aussies get beaten it’s good for the game. That’s what we live with."

BetEasy’s chief executive Matt Tripp to The Australian: "Turnover has decreased on each of the major race days in the Melbourne spring carnival, and that has continued on Melbourne Cup day. There’s been a drop in the number of people having a bet on the major races themselves and this has been enough to drive down overall turnover."

Team of the week

Matildas. In a move that made headlines and lead sports bulletins around the world, they are now on the same pay deal as Socceroos.

Ash Barty. They don’t call her “Cash” Barty for nothing! Won $US11.3 million in this last season, second only to the $US12.3 million of Serena Williams in 2013, and the $US4.4 million she won last weekend was the largest tennis prize in history. And though just 23, she is now 24th on the list for most money earned in a career by a female player, ahead of such names as Seles, Capriati, Evert and Sabatini and surpasses male players such as Rafter, Courier and Safin.

Tonga. Their victory over the Kangaroos last Saturday means they have beaten all of Australia, Great Britain and New Zealand in the last two years, giving league a much-needed fourth contender for what is otherwise a farce of international competition.

South Africa. Have now won the World Cup three times – equal to the All Blacks – a feat all the more impressive for the fact that they did not participate in the first two World Cups in 1987 and 1991.

Melbourne Cup. Shed 450,000 viewers in comparison to last year as #NupToTheCup took off on social media, and they had the lowest number of attendees in the last quarter-century. It happened in the same week that the Dapto Dogs – wonderfully – announced it was closing down, even if that decision is now in legal dispute.