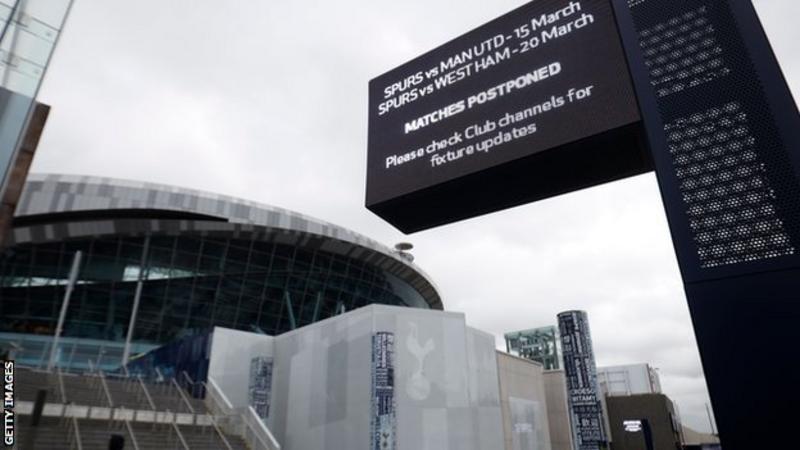 The Premier League is expected to reiterate its commitment to completing the season in Thursday’s emergency board meeting held via conference call.

All games have been postponed until at least 4 April because of coronavirus.

But with the pandemic set to continue much longer than that, the league is expected to acknowledge there will be no action for several weeks after that.

The postponement of Euro 2020 has opened up a window for domestic leagues to be completed by the end of June.

But clubs are unlikely to put a definitive date on when they hope to resume the season, given the UK government has effectively banned sports events by advising against mass gatherings.

It is understood that if those restrictions on mass gatherings are not lifted, officials are open to the idea of staging matches behind closed doors in order to complete fixtures.

But no major decisions are anticipated at this stage if the season cannot resume, with one insider describing it as an “information-sharing and clarity meeting. Nothing concrete will come out of it.”

There have been signs that the clubs are split on the issue of how the season should end.

Football Association chairman Greg Clarke also expressed his concern that it may prove impossible for the season to be concluded.

However Brighton and Hove Albion chief executive Paul Barber told the BBC that it would be “unjust” if runaway leaders Liverpool were denied the title, and suggested increasing the league to 22 teams for 2020-21.

Club representatives will be shown expert modelling of various end-of-season scenarios at Thursday’s meeting, and what the possible financial and legal ramifications of each would be.

But for now at least, there seems to be a determination to do everything possible to push for the season to be completed.

The Premier League held talks with the FA and the English Football League on Wednesday, and is known to be in dialogue with its broadcast partners and sponsors amid the threat of legal action on a number of fronts.

Sky and BT have declined to comment on reports that they could seek compensation totalling £750m if the Premier League breaches its £3bn domestic live television contract by not completing its fixtures.

Meanwhile, top clubs in the Championship are said to be ready to launch a legal bid if the season is abandoned and they are denied the opportunity of promotion.

The issue of players’ contracts – many of which expire at the end of June – and the knock-on effect on next season if this one is extended by months, may also be discussed on Thursday, along with the financial impact of the crisis.

Julian Knight, chair of the Department of Culture, Media and Sport (DCMS) Select Committee told the BBC: “The strong rich Premier League clubs should come to the aid, wherever they can, of the grassroots of the game.

“Lower league clubs are lynchpins of their communities and local employers. We don’t want what happened to Bury last year to occur in towns across the country.”

On Wednesday, the EFL released a £50m short-term relief fund to help clubs with cash-flow issues because of the coronavirus outbreak. The fund includes the early release of award payments, and an interest-free loan facility.

In a letter to the 72 EFL clubs, seen by the BBC, EFL chief executive Rick Parry said: “Over the last week, the EFL has been in ongoing dialogue with the Government, through DCMS, aimed at securing a package of measures for our clubs… that would enable us to centrally co-ordinate support.

“While we do not have any certainty on this at this point, the Chancellor [Rishi Sunak] did at least provide some clarity with regard to professional football clubs.”

Sunak has said that clubs will be eligible for business rates relief measures and grants that he announced as part of an emergency financial package.

He also said that there are now 2,000 dedicated HM Revenue & Customs officers ready to take the calls of businesses such as football clubs in order to provide a deferral for tax payments, and an agreed schedule for paying them back.